ORIGINAL POST BEGINS at 3:45 PM: Protesters are laying on the ground trying to block a paddy wagon carrying five arrestees from leaving the Chase Bank on Broadway, while Seattle Police Department officers spray protesters in the eyes with what appears to be pepper spray or mace. "It's a big fight in the middle of the street," Christopher reports via cell phone. "Cars and buses are getting trapped and people are getting sprayed."

There's a cacophony of sirens and screams in the background.

Just a few hours before Occupy Seattle begins an action aimed at JP Morgan Chase CEO Jamie Dimon (beginning at 4:30 p.m. in Westlake Park), five protesters walked into the Chase Bank on Broadway at 2:07 p.m. and chained their arms together between lengths of PVC piping in the bank lobby. About 60 people are out front and another 30 are behind the bank, while several cop cars are parked on East Thomas Street.

"Bicycle cops are blocking both entrances," says news intern Paul Holmes who is also down at the scene. Behind the bank, eight protesters are on their stomachs in front of the double-door entrance, Christopher adds. Chase has drawn all the blinds so nobody can see inside the branch. There are little gaps where you can see inside, and protesters had been taking photos of what’s going on in the bank.

Shortly before the arrests broke out, protesters were trying to lay down in the main entrance of the bank, but one cop just reportedly told them, "Don't lay down in the doorway, people pee there."

UPDATE at 3:50 PM: Police are having a street battle in the middle of Broadway as the protesters continue to try blocking the paddy wagon from leaving the scene, Christopher reports. There are about 40 police officers in the street, including bike cops using their bicycles as barricades, as the police try to push the protesters south and the protesters push police back north again. 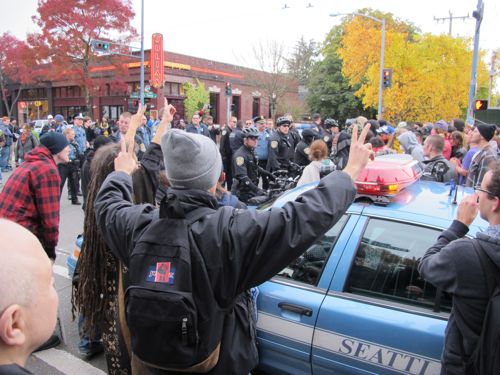 "One man got on the hood of a cop car and was taken down by several police, but I don’t know if he was arrested," Christopher says. "Meanwhile, behind them I saw more guys getting sprayed by white stuff. People with water cans are pouring water into people's eyes. The crowd won't get out of the road." One man who was sprayed says the substance was peppery or like bear mace, but it's unclear how the man knows what bear mace tastes like. 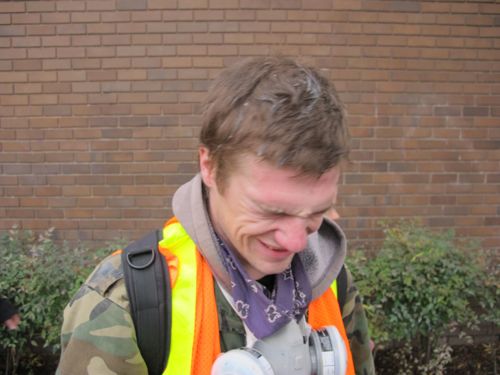 UPDATE at 3:59 PM: Protesters regrouped in the intersection, held a brief conference, and decided to go protest Dimon outside the Sheraton tonight. Gotta say, that's pretty smart strategy: Get in, make a scene, get out, and head to the next action.

UPDATE at 4:13 PM: Police and protesters are now facing off in front of Seattle Central Community College, where the Occupiers are camped. It's reportedly not a unified angry mob: while some of the protesters are shoving cops and chanting, "Fuck the police," some of the protesters are very calm and saying, "Don't forget nonviolence." The police are reportedly being fairly professional but a little frenzied. East Pine Street is blocked off around the SPD East Precinct. Capitol Hill is blanketed with the noise of sirens and helicopters.

UPDATE at 4:49 PM: The SPD media relations unit isn't picking up the phone to comment on how many arrests were made this afternoon in the Chase Bank incident; however, the SPD Blotter does include an update that, earlier today, police arrested five demonstrators for criminal trespassing at a bank on the 1500 block of 12th Avenue.

UPDATE at 4:59 PM: Goldy reports that protesters downtown are "busy soaking scarves in vinegar ahead of the Jamie Dimon march." This will help mute the pepper spray, presumably. Goldy said he "didn't bring a scarf. Poor planning." SPD Sergeant Sean Whitcomb, meanwhile, says that he's not certain what cops sprayed at protesters, but the "standard issue is Oleoresin Capsicum pepper spray." He could only confirm five arrests inside the Chase branch; asked about the photo at the top of this post of the man arrested in the street, Whitcomb added, "That number may actually go up. "