Washington's New Supreme Court Justice Is Thought to Favor Gay Rights. So Why Not Push Marriage Equality Through the Courts Again? 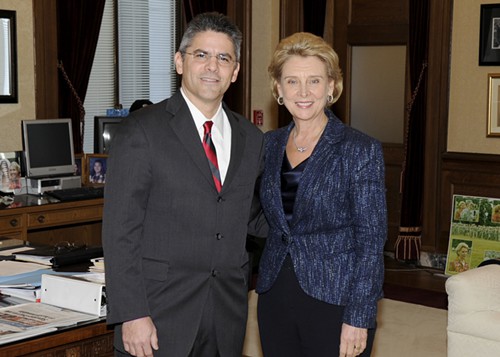 Anything on the record about his position on civil rights? Specifically, marriage equality? If so, and it's a positive one—shouldn't the Equal Marriage folk of Washington State be considering filing another suit against the state DOMA?

Good question—after all, the state supreme court's 2005 decision to uphold Washington's Defense of Marriage Act rested on a one-vote, anti-gay-marriage majority that's now likely become a one-vote, anti-gay-marriage minority.
Wondering the same thing as troubletown71, I talked to several people in the gay rights community about this yesterday. While judges aren't supposed to declare how they would vote on some hypothetical future case, people in the legal and gay rights communities who know Gonzalez told me their strong sense is that he would support marriage equality.
"Steven Gonzales understands the realities faced by gay and lesbian families who are are denied the right to marry," said Josh Friedes, Marriage Equality Director for Equal Rights Washington. "We have every reason to believe that Justice Gonzales will apply the constitution fairly to LGBT people and all people. For this reason, we are confident that should marriage equality ever go before the court he would rule on the side of justice and find that same-sex couples have been denied their constitutional rights."
OK. So why is the local gay rights community gearing up for trench warfare in the state legislature next session when it now believes it has all the state supreme court votes it needs to finally get Washington's DOMA declared unconstitutional?
The answer, in short, is timing. The composition of the high court can change, justices can retire or die or lose election—Gonzalez himself will face voters next fall—and therefore it's seen as way too risky to try and get a case before the current court, knowing the current court could very well be a different court by the time a case gets there.
"If a marriage equality case were filed today it could take years to reach the Washington State Supreme court," Freides told me. "We have no way of knowing now who would be on the court in the future, since there are Supreme Court Elections in 2012. By contrast, as we look to trying to pass a marriage bill in 2012 through the legislature we know, we currently see a legislature and governor we believe are fair minded. We do not know who will be in the legislature or the Governor’s office after 2012."
The Stranger depends on your continuing support to provide articles like this one. In return, we pledge our ongoing commitment to truthful, progressive journalism and serving our community. So if you’re able, please consider a small recurring contribution. Thank you—you are appreciated!
CONTRIBUTE NOW