It was wet. It was muddy. It was miserable. And it was amazing today, as thousands of 99 Percenters shut down several blocks of K Street, in the heart of our capital's lobbying district. 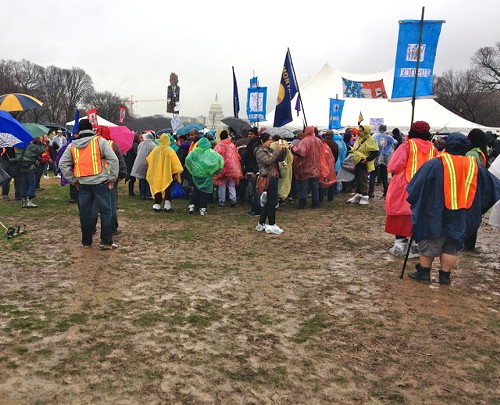 The National Mall had long since turned to mud by the time protesters gathered under a steady rain this morning to prepare for the day's actions. State delegations were divided into teams—Blue, Red, Green, and Brown—each with a different route to our ultimate destination; Washington was assigned to the Blue team, but independent minded as we are, some of the delegation split off with the Red. I stuck with the Blue, and after a series of inspirational speeches and chants, we were off.

Off to where, I really wasn't sure, but the organizers sure seemed to know what they were doing. Throughout the entire march, a dozen or so marshals in orange safety vests guided the way, blocked off intersections, and lined the curb to either keep protesters off the street, or eventually, in it. It was an impressive sight, and remarkably orderly, as this phalanx of protesters wended its way through D.C.'s streets, eliciting honks of support from passing cars.

And it got even more impressive when we turned down 16th Street toward K Street to find the rest of the teams already there. Several thousand people packed the intersections at both 16th and 15th, while a contingent from Occupy DC filled the intersection at 14th, right by their McPherson Square campground, forcing police to shut down the street all the way from 13th to 17th.

For the most part, the police just stood by and watched. No riot gear. No pepper spray. No tear gas. And the native Occupiers took advantage of the overwhelming numbers to erect tents in the street outside their encampment (an encampment, by the way, that has got to be the largest remaining Occupy camp in the nation, filling most of a city a block). Eventually, the bulk of the protesters at 16th and K cleared to the sidewalk, leaving a small contingent of volunteer arrestees planted in front of a banner in the middle of the intersection. Police were informed that these protesters intended to stay put, and after a brief negotiation, they were arrested about as civilly as they had protested. Or at least, about as civilly as getting arrested can be. 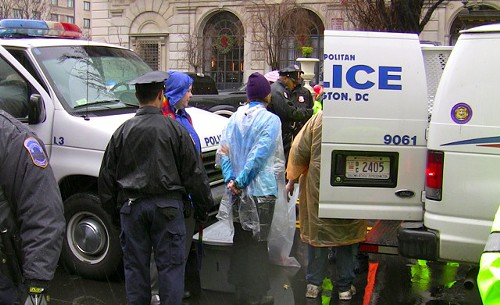 All in all, an unqualified success. Cynical observers may question what is accomplished by shutting down city streets... until one turns on the evening news. All the news networks were there, closely covering this massive action, and from what I saw, when interviewed, the individual demonstrators were as disciplined with their message as the organizers were with the entire march. This is what democracy looks like, sure, but this is also what earned media looks like. 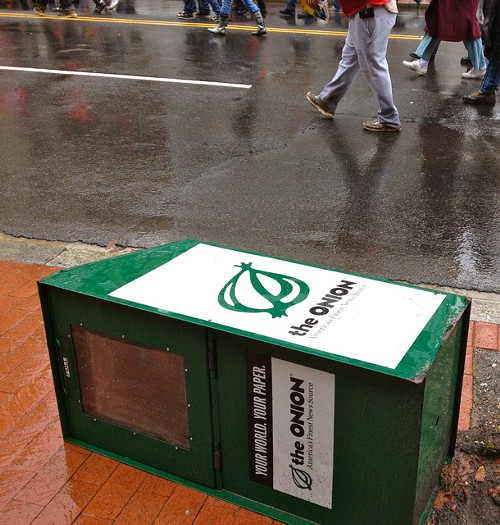 And no doubt the 99 Percenters earned every bit of media they got. Tired, hungry and soaked to the bones from the relentless rain, the team leaders organized their groups once again, and headed down 14th Street, back to the Mall. Once again marshals blocked the intersections and kept everybody line. Others scoured the street for bits of dropped litter, picking up after the passing crowd. In fact, the only bit of property damage I saw the whole day was a tipped over Onion news box. And even that was quickly righted.

And for those of you who insist the Occupiers and other demonstrators are a bunch of dirty fucking hippies, just take a look at the video below, in which I interview the arrestees just before they are taken into custody. You can't get much more civil than this group, even if they are deliberately disobedient.