According to the SPD's account, the raid was in response to a 911 call that afternoon that alerted them about "multiple male and female subjects who had unlawfully entered and occupied a residence. ...Preliminary investigation indicates that the suspects entered the house and subsequently damaged the interior of the house with graffiti. They also left garbage, open containers of food, and were cooking inside the house on a portable, gas-operated stove."

The house had been bought out of foreclosure in August by Mountaincrest Credit Union, according to CDN. The way the CDN story reads, the house was under renovation and the occupiers were interrupting progress and damaging it—and they'd broken in. 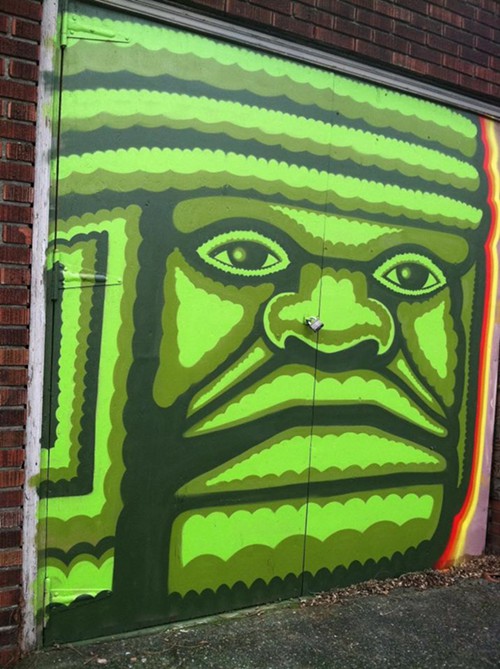 But that story doesn't match what I learned in a meeting just now with two of the 10 or 12 occupiers who had been in the house for about two weeks.

They held up the house key. An anonymous "elf" had come by the Occupy Seattle encampment at SCCC a few weeks ago and handed them the key and the address, they said. (A different anonymous donor also gave them a sailboat that they'll begin using and painting in the spring.) Inside, they'd begun painting a forest landscape, and planned a waterfall down the staircase; they titled the house "Water." They denied doing damage or being a haven for any kind of destructive activity and said they didn't know of any complaints from neighbors. Instead, they saw the house as a home base for adding art to the immediate neighborhood. To that end, they'd completed a mural nearby yesterday, on Fir Street between 14th and 15th, on a garage wall offered to them by a resident. Also yesterday, another donor gave them furniture: a futon, bookcases.

Two of their fellow occupiers are still in jail, set to be released on bail this afternoon. The third person arrested was not part of the occupation and never had lived in the house, they say. He, along with about 50 other protesters against the raid, had come to show his support, and when he stepped onto the grass, he was arrested, the occupiers say. He is the one charged with weapons violations, they say: He had a pocket knife in his pants pocket, which he then offered to the police, for which they booked him on the weapons charge. 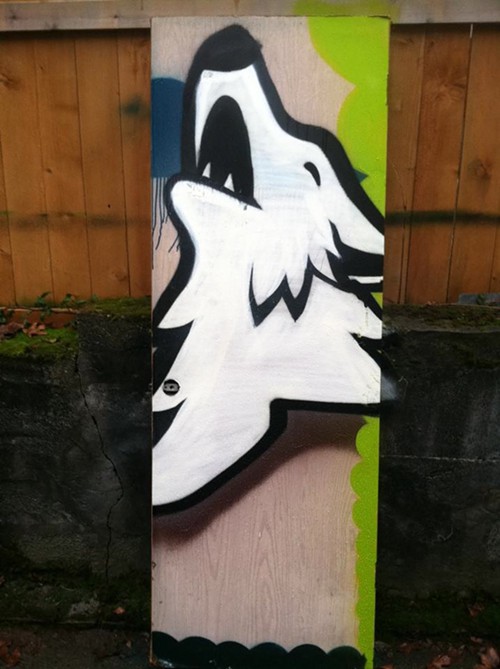 The police did not give the squatters 72 hours eviction notice, and when Cammi Morgan, one of the occupiers, asked whether the police had any contact with the property owner, they said no, she says. It is unclear why the scenario at 19th and Spruce is so different from the other house where Occupy Seattle is squatting, at 23rd and Alder—where anarchist squatters have a court date December 28 and have had plenty of notice of removal.

"This house wasn't about anti-police at all," Morgan says. "Our intention was to show that we could give back to the community. It wasn't about having a roof over our heads—we're all pretty resourceful. We were excited to use the house as a pathway to create art for everyone. We'd offered to touch up the fading murals at the food bank at Saint Mary's. I wanted to offer guitar lessons at the boys and girls club near there."

Neil Vandervloed, creator of the cartoon hand signs that have been the most visible graphic for Occupy Seattle, was bringing community dinners cooked by his wife to the house each night.

"I'm really disappointed," Vandervloed said. "Especially this type of reaction. There were something like 13 cop cars and 30 cops there, with assault rifles, shotguns, and handguns out and drawn—to arrest two artists on Christmas Eve. The neighbors made us hot coffee and stood in solidarity with us as the police raided."