A Woman Working for St. James Cathedral Grabbed My Hand and Tried to Take My Pen While I Was Covering the Seattle Catholic Church's Campaign to Ban Marriage Equality

Call me naive. But I had pretty warm feelings toward Seattle's progressive Catholics. From baptism until my early teens, I attended St. Therese Parish every Sunday, even taking my first Communion there—real fresh baked bread, not those godawful wafers—and I attended the St. Therese School for five years. Sure, the teachers were strict, but they were kind and gentle (Sister Maureen was a kind and gentle political radical, if I recall).

So when I went to St. James Cathedral on Sunday, I was expecting parishioners to give me a cordial welcome. I wanted to ask some of the congregation's leadership about the proclamation issued on Friday evening by Seattle Archbishop J. Peter Sartain. In it, Sartain and three other bishops in the state declared a political campaign to stop a pivotal same-sex marriage bill in the state legislature, in the name of the "continuation of the human race." They said that allowing same-sex marriage would result in "no special laws" for hetero couples and the decline of the species.

Since St. James is the official cathedral of the Seattle Archdiocese, which is headquartered across the street on First Hill, and my phone calls on Saturday went unanswered, I figured I'd ask in person if they agree with the proclamation and its logic. And if they disagreed—as many Catholics claim to behind closed doors—would they denounce this decree from the four local bishops?

After all, while the archdiocese may echo the Vatican, level-headed Catholics of Seattle can't possibly believe straight people require "special laws" to make sure humans don't perish. Gay-marriage laws are passing left and right and, um, the human race is booming.

As people left the mass, I approached a man in a long white robe wearing a mammoth silver crucifix necklace, and I asked him about the local bishops' proclamation. "I can't speak for any of those people," said the man named Jerry who claimed he didn't have a last name. "As far as I know, we are completely open to all the children of God. I go by the word of Jesus to love my neighbor, and that includes every neighbor."

Do Seattle's liberal Catholics believe the argument about procreation? "He, being the Archbishop, has to toe the line of Rome," Jerry explained. "But for most of us, we toe the line of Jesus: He didn't speak hatefully of anyone. There is a large lesbian, gay, and transgender population at St. James."

Would they oppose this? "Yes, in many different ways," said Jerry.

Jerry said I should catch up with Father Michael Ryan—who he assured me understood the plight of gays and lesbians—in the parish hall next door, where they were serving Filipino food. So I followed his instructions and walked into the room, which smelled of sesame oil and roasting meat, and then waited around near the entryway for Father Ryan. I hadn't interviewed anyone but I had my reporter's notebook out. 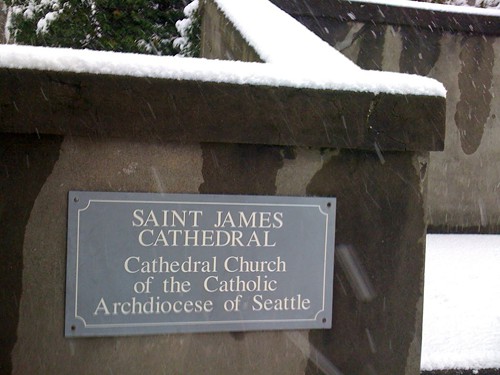 As I waited, a woman in her 30s or so rushed in front of me and told me to leave. I explained that I was a reporter and I'd been told to come speak to Father Ryan. "It is not appropriate," said the woman, turning red in the face. She said she worked for St. James. As I noted that, she lunged for my hand and grabbed it and then shifted her grip to take my pen from my hand. Holding onto the pen, I asked, "What are you doing? I'm a reporter and you're getting physically confrontational with me for taking notes." She said she didn't want to be named (I never got her name), briefly apologized for trying to take my pen, and then insisted I stand outside. So I went and stood in the snow.

At that moment, a man standing in the doorway said he wanted to speak to me.

"I support Governor Gregoire," said Bill Baumgartner, 76, explaining his support for the marriage-equality bill in the legislature. "We should have marriage for all people."

He didn't necessarily believe the bishops' procreation argument, either, and pointed out the church's hypocrisy in targeting gay people. "Would the bishop say, 'If you are divorced one or two times, leave the church,' or, 'If you have used contraception, leave the church'?" he posed the question. "But we don't do that."

He wasn't alone in dissenting from the anti-gay-marriage proclamation.

One woman who was leaving stopped to talk but asked not to to be named. She said, "I think that anyone should get married who wants to. I don't agree with [the bishops], because if you are born a certain way, you can't help it." But she wouldn't speak out against the Archdiocese, she said, because, "It doesn't bother me one way or the other."

In the press, Joel Connelly at Seattlepi.com posted a piece last night that says, "The bishops' letter left this recently returned Catholic perplexed at... how they treat people I know who are in loving, committed same-gender relationships, in several cases doing a splendid job of raising children."

I stepped a few feet back into inside to see if Father Ryan was available when a woman, declaring herself to be an another employee of St. James, rushed up and literally began screaming at me. She accused me of trying to go "undercover" to ambush parishioners and trick them into talking to me. (For what it's worth, I always introduce myself by name and identify myself as a reporter for The Stranger when I approach anyone for an interview, and I hadn't asked anyone in the room for an interview.) She told me to leave and she would get Father Ryan for me, so I went back outside and stood under the sign that said, "All are welcome."

I waited for an hour and half as it snowed.

Father Ryan never came. When another staffer stepped outside, he told me, "Father Ryan already left." So I guess Father Ryan slipped out the back door.

I've since called St. James asking to speak to Father Ryan (he's away and unreachable for a week, the receptionist said). I asked to speak to the church's media spokesman and left a message, but he hasn't called back. I also called the Seattle Archdiocese twice, but, again, no word.

Look, I acknowledge that some people at St. James and the Archdiocese may feel like they're wrongly placed under the microscope by having a reporter arrive and call. But their leaders issued the proclamation, their leaders asked members to lobby Olympia, their leaders asked supporters to "do everything possible" to infringe on other people's rights. If they get blowback, it's because their institution initiated a conflict. The church isn't the victim here.

So perhaps I was naive for having faith in Seattle's Catholic leadership, for thinking that they were kind or at least brave enough to explain themselves. True, some of the flock seem grounded—albeit a little timid about challenging their leadership—but the shepherds are the collective problem. If the out-of-control staff at St. James are any indication, Seattle's Catholic leadership is a confrontational, physically grabby bunch who join a priest that apparently runs away from plain questions. By refusing to repudiate bigotry, they are the ones defending it. But I'd still like them to prove me wrong.