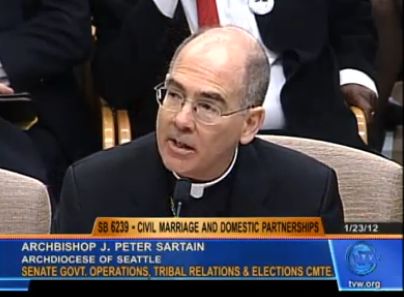 Anyone who has been waiting for a debate on same-sex-marriage—the sort conservatives have been running from—here it is. It's a public hearing on state senator Ed Murray's bill to allow same-sex civil marriage before the Senate Government Operations, Tribal Relations & Elections Committee. It begins on TVW starting on 10:00 a.m. The bill requires only one more senator's vote to pass.

Senator Craig Pridemore, the committee chair, insists that there will be no interruptions or jeering, "so that no one is uncomfortable." If he has to give three warnings, he says, he'll clear the hearing room. If anyone's testimony is creating a "hostile environment," he'll end that too.

Christian radicals are out in force this morning (both elected officials and civilians) and will be making the most forceful arguments they can. They'll be out at 1:30 p.m. when a similar hearing is held on the House. But don't expect these hearing to change any minds. Each side has locked down its votes and, by most counts, only five senators are undecided.

First up, a few words from the senators. Murray points out the bill provides robust protections for religious entities that don't want to involve themselves with gay marriage. You can read the full bill here, which states: "no religious organization is required to provide accommodations, facilities, advantages, privileges, services, or goods related to the solemnization or celebration of a marriage unless the organization offers admission, occupancy, or use of those accommodations or facilities to the public for a fee, or offers those advantages, privileges, services, or goods to the public for sale." Republican senator Pam Roach (R-Handgun) expresses concerns that this section could be vetoed by the governor.

A man joining them contends that the bill would force "faith-based adoption providers to shut their doors." He adds that photographers and other businesses would not be allowed to discriminate against same-sex couples. He asks to amend the bill to to allow "religious liberties" that allows business owners to refuse services to gay couples.

Backholm promises senators that if they approve the bill, he will put it up to a vote this November. "We will exercise our right to referendum, we will gather the signatures, and place it on the ballot," he says. "After considering why the fence was erected, [voters] will conclude that the fence should not be torn down."

Jennifer Roback Morse warns lawmakers that approving the "redefinition parenthood" will put them on "the wrong side of history." She says taking parenthood from "the natural moorings of biology" will make parenthood a "genderless institution," adding that lawmakers are using "equality as battering ram."

"Whether you are ready or not, I will hold you accountable," says Roback Morse.

There are two distinct strategies at play: The marriage equality advocates are connecting with people's lives; the traditional marriage advocates are warning the senators that society will crumble, while grasping to name specifics, and will deliver payback at the ballot if the senate defies them.

Next up we have Seattle Archbishop Peter J. Sartain, who, as I've reported, is forcing Catholic churches to advocate against marriage equality on the basis that gay couples deteriorate humanity's ability to procreate. "The state has long recognized the societal benefit of strong families... and permanent male-female relationships are the best," says Sartain. "Would the definition of marriage change, there would be no special laws for these couples." 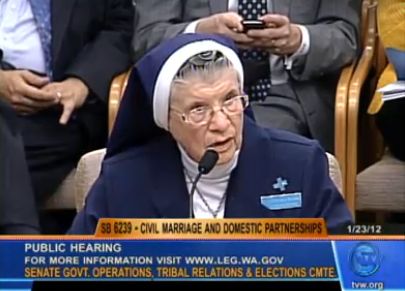 That pious prejudice is quickly balanced by a firecracker speech by Rabbi Jonathan Singer, who speaks in favor of marriage equality. "There are times to look into our spiritual mirror and see that we are the ones who are oppressing," Singer says. He makes the case that he wants to legally perform marriage ceremonies for gay couples: "I along with other religious representatives believe that the state is not only discriminating against same-sex couples but us as religious leaders."

It was inevitable. Here comes the gays-are-carriers-of-diseases-like-AIDS argument. "The lifespan of a homosexual is half the lifespan of a non homosexual," says a man. Allowing same-sex marriage, he contends, "destroys families and destroys society."

Next up is a self-described conservative Republican who says same-sex marriage proves "no threat to our marriage by gay couples being married." His gay son suffered an aneurysm, he says, and is now being cared for by his partner. "The same rights me and my wife enjoy should be extended to his partner."

A woman who says she works with children warns that a lack of fathers will cause the "downfall of our nation." She's concerned about motherless kids, too. While she acknowledges that hetero marriages "are not all healthy relationships, you have to have a strong foundation to have good fruit."

Now the anti-equality side really going for it. A man contends that lawmakers should block the bill because NAMBLA wants it to pass. "They are supporting all the gay-rights marriage bills because they have a plan," he explains, to incrementally expand laws to allow for pedophilia. Of course, there is no evidence that NAMBLA is supporting this bill.

It's like a tennis game, back and forth: On one side, terrified speculation based on biblical superstition; on the other side, personal experience and evidence. Speaking of which, a woman citing actual science points out that no evidence exists suggesting that same-sex parents are less competent that opposite-sex parents.

Last, a nun literally reads biblical passages and speaks about Sodom and Gomorrah.

That's all, folks. The House hearing begins in at 1:30 p.m. Senators says they will give the bill further consideration at an executive session on Thursday at 10:00 a.m.