The proceedings are streaming here, and showing in Seattle at this bar.

6 p.m. The senate was called to order, members of both parties immediately recessed to their private caucus rooms to strategize, and Lieutenant Governor Brad Owen (who presides over the senate) reminded everyone up in the packed galleries that there are strict rules of decorum that should be observed. We'll see how that goes, but so far everyone's on their best behavior. Sen. Ed Murray promises that this will be over before the sun comes up... and hopefully it won't come to that. But just in case I have a nice seat here in the corner of the senate floor. Spotted watching intently from the wings: State Representative Jamie Pedersen, D-Seattle.

6:10 p.m. State Senator Brian Hatfield of Longview, one of four remaining undecided senators, announces that he'll vote for gay marriage. "After months of thought and prayer, I have decided that I will offer my vote in support of Senate Bill 6239," Hatfield says in a statement. "I believe this will not be the final word on this issue, as it is almost certain the voters of this state will have a chance to weigh in with our collective, 'yea' or 'nay'. I now hope that the Legislature can return to the business of the state, including balancing the budget, creating jobs and moving toward a full economic recovery.”

6:37 p.m. Back in session. First order of business: Rule suspended to allow the senate to meet until after 10 p.m. today—get comfy. (However, the senate also agreed to limit members' remarks to three minutes.)

6:41 p.m. A number of amendments are now being adopted—which means, in the Democrat-controlled senate, that they're viewed as friendly amendments. Most interesting to me so far: An amendment offered by undecided Senator Joe Fain (R-47) that says, "A regularly licensed or ordained minister or priest, imam, rabbi, or similar official of any religious organization shall be immune from any civil claim or cause of action based on a refusal to solemnize or recognize any marriage under this section." It was adopted, and one wonders whether Fain has now received the assurances he needs to vote yea.
6:54 p.m. An amendment offered by Senator Mike Padden (R-4) would keep judges or justices of the peace from being forced to perform same-sex marriages. Democrats and their (few) Republican allies voted it down, after it was noted that judges and justices of the peace already have the right to decline to perform any marriage, and this would not change if same-sex marriage is legalized.
7:00 p.m. Also voted down: An amendment by Senator Dan Swecker (R-20) that would have amended Washington's equal protection law to allow businesses to decline services—like wedding photography, flower delivery, etc.—to gay couples getting married "if such a marriage is contrary to the individual's or the owner of the entity's religious beliefs."

7:12 p.m. Democratic Senator Brian Hatfield (who, as I mentioned earlier, just this evening came out in favor of gay marriage) now offers an amendment sending this bill directly to voters for approval or disapproval: "The secretary of state shall submit this act to the people for their adoption and ratification, or rejection, at the next general election to be held in this state, in accordance with Article II, section 1 of the state Constitution and the laws adopted to facilitate its operation." Senate Majority Leader Lisa Brown (D-Spokane) is now speaking against this idea, saying it puts minority rights up to a majority vote. Brown, in her speech, notes that her sister has been in a same-sex marriage for many years. "This is not something that you ask folks to vote on in my opinion," Brown says.
7:25 p.m. After a long discussion that involved Senator Don Benton (R-17) waving around a piece of paper showing that gays are .5 percent of the population—and therefore claiming that the people should get to vote on their rights, and that maybe the senate doesn't even have the power to change an institution as old as marriage anyway—Hatfield's put-it-up-for-immediate-vote amendment is narrowly voted down, 26 to 23. Murray, in a stinging response to Benton's talk about .5 percent of the population, reminded Benton that representative democracy exists, in part, to protect the minority from the tyranny of the majority. "That one half of one percent is the reason this chamber is here," Murray said.
7:30 p.m. Now we're into the speeches, in which lawmakers explain why they're voting yes or no. Murray goes first, with an eloquent argument for including gays and lesbian citizens in the rights of marriage (and a generous assumption that those who vote against this bill will do so after serious, thoughtful consideration). 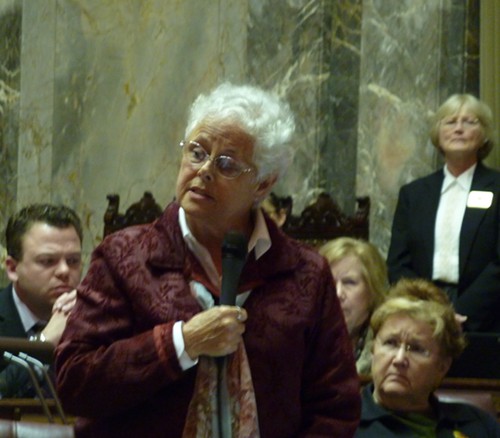 7:35 p.m. Senator Debbie Regala (D-27) chokes up while talking about how her marriage took place only a few years after interracial marriage was legalized—and says that the union of her and her husband is proof that marriage hasn't always been a static institution, and can be changed to become more inclusive. And Seantor Kevin Ranker (D-40) begins his speech with this: "As the son of a gay man..." I am learning a lot about the ways in which our legislature actually does reflect life as it's lived in Washington. Scattered applause after his speech.
7:40 p.m. Senator James Hargrove (D-24), one of two Democrats who will be voting against the bill, chokes up trying to explain how we're all sinners, and how he doesn't judge anyone, and how he has the utmost respect for Ed Murray, but he's voting no.
7:43 p.m. Senator Cheryl Pflug (R-5) is giving one of the best speeches of the night so far—about the Bill of Rights, about the gradual extension of rights to minority groups over the history of this country, about how "tradition" is "kind, often, to the majority, but not so kind to the minority." She concludes: "It is part of our struggle to ensure that everybody... should have the right to enjoy those personal freedoms we hold dear."
7:47 p.m. Senator Steve Hobbs (D-44), noting that this isn't a political winner in his district, says that he's voting yes because of his experience serving aside gays and lesbians in the U.S. military: "How can I look them in the eye, Mr. President, if I vote no on this bill?"
7:49 p.m. Senator Steve Litzow (R-41), the other Republican who's already promised to vote yes, gives a very short speech that frames the extension of marriage to gays and lesbians as a conservative value.
7:53 p.m. Senator Jeanne Kohl-Welles (D-36) knocks down some of the arguments against gay marriage, noting that she and her husband don't have kids but they're allowed to stay married. Also, she says, she still can't figure out how same sex marriages could hurt her marriage. "How would it possibly affect me?" she asks.
7:56 p.m. Debate closed. Vote is happening now. Senator Andy Hill (R-45), undecided until now, votes in favor. Same with Senator Joe Fain (R-47).
7:58 p.m. "Mr. President, 28 yeas, 21 nays." (That's 24 Democrats and 4 Republicans voting yea, and 3 Democrats and 18 Republicans voting nay.) THE BILL PASSES. It now goes on to the state house, where it's assured passage, and then to the governor's desk, where it's assured her signature. 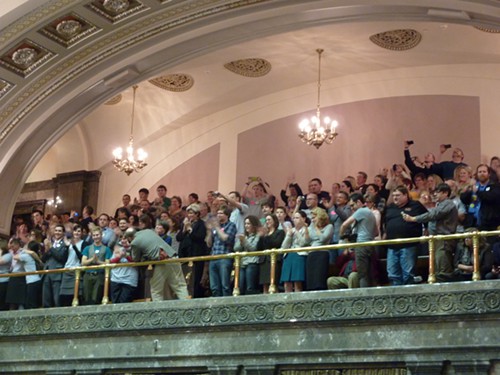 Tonight the Washington State Senate stood up for what is right and told all families in our state that they are equal and that the state cannot be in the business of discrimination. I believe that this decision should be made by our state Legislature, and I’m proud our elected leaders recognized that responsibility.

Tonight we saw the best of Washington and our leaders. They were respectful and they were kind. I thank Sen. Ed Murray for his leadership.

This vote was courageous and was only possible with bipartisan support. That support shows Washington’s commitment to equality. Fair-minded and responsible leaders crafted a bill that protects religious freedoms while ensuring equal rights. I commend our state Senators who acknowledged tonight that separate but equal is not equal.

Tonight our families are better for this vote. Our kids have a brighter future for this bill. And our state is better for this bill. I encourage the House to approve this bill and get it to my desk for my signature. I look forward to the day when all Washington citizens have equal opportunity to marry the person they love.”