Tacoma Is Coming Out for Santorum

So I arrived in Tacoma a short while ago for the Rick Santorum rally taking place at the Washington State History Museum tonight at 7. A volunteer for the Republican Party with a rather painful-looking eye injury (presumably recovering from a serious black eye?) informed me that the rally wasn't going to be inside the museum, but outside in a large cement stadium in front of the museum's entrance. Here's what it looked like a little over a half hour ago:

It's chilly out, and it's starting to drizzle. But even as I was walking away from the beginnings of the rally, some older folks were just arriving. Here's what it looked like a few minutes ago:

Even as I type this, more folks are showing up all the time. It's a decidedly un-youthful rally, but these folks are here an hour and a half before. They are hardcore.

Some of them even brought their own Santorum signs, for crying out loud. A couple of cops are monitoring the situation, but they seem laid-back. Maybe a little too laid-back, considering Occupy Tacoma's headquarters are about 500 feet away from the museum. 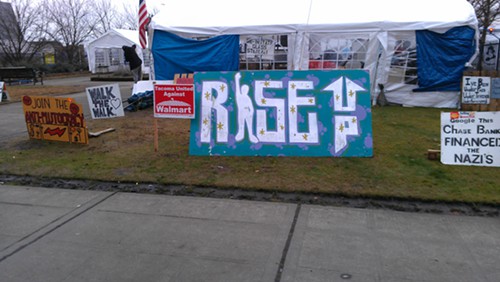 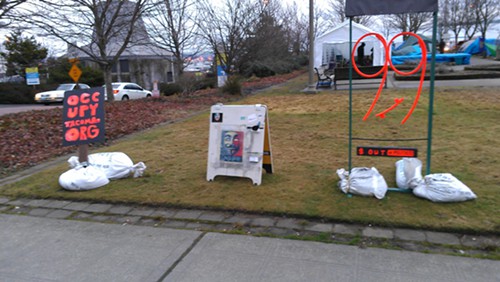 At the moment, the only Occupy presence is one man with a TAX THE RICH sign on the sidewalk, but things could get rowdy. I'm in a coffee shop right now, where several Santorum supporters are marveling over a young man's MacBook Air. ("It's so thin!") As always in the tumultuous 2012 political scene, the one thing both parties can agree on is the genius of Steve Jobs.

I'll be posting more about the rally tonight on Slog.