"I looked the man in the eye. I found him to be very straightforward and trustworthy. We had a very good dialogue. I was able to get a sense of his soul; a man deeply committed to his country and the best interests of his country."
—George W. Bush on Vladimir Putin, June 16, 2001 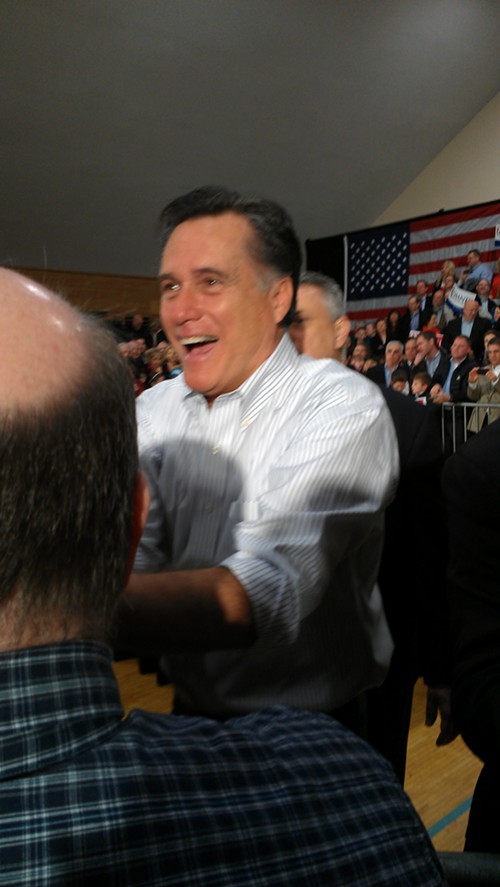 To use Mitt Romney's own stilted language, Mitt Romney's handshake is the right firmness. In fact, he shakes hands exactly right—his hands aren't the overly moisturized baby skin you expect, but they're not too rough, either. He pumps your hand up and down exactly the correct number of times (four-and-a-half, I think) and he looks you right in the face, makes eye contact, and acknowledges your presence with a broad, welcoming smile. A Mitt Romney handshake is the very definition of cordiality. As he's shaking your hand, you think he must have taken a course on handshaking, sometime back in his youth. Not too formal. Not too friendly. It's so perfect, it makes you feel imperfect. And then, after just exactly the right amount of time has passed, he moves on and is shaking another hand, and you're standing there with your hand in the air, like an idiot.

Ostensibly billed as a "meet-and-greet," the Mitt Romney rally at Highland Community Center in Bellevue this morning made all the other Republican candidate rallies that have been held in Washington state this month look dumb in comparison. He drew thousands of people to a tiny venue the size of a high school gym. Only those, like me, who lined up an hour before the 8 am start time managed to make it inside. Everyone else was stuck out in the cold, envying those who managed to score access, the few hundred VIPs. It made the rally feel like a status symbol, something earned, a valuable commodity.

Which, really, it wasn't. Romney was in and out in twenty minutes or so. The preambles, featuring Dino Rossi, Michael Medved, and Romney Washington chair Cathy McMorris Rodgers, took about as much time as Romney's speech. And Romney was awkward, just the way he is on TV. He looked uncomfortable in his jeans, dress shirt, and brown loafers with black socks. He thanked the Bellevue crowd for giving him "a great Seattle welcome." There was a very noticeable pause before Romney identified the state he was in, later in the speech—"You sell a lot of products from [beat] Washington state." He opened his speech by talking about his wife and how much he loves her and how they met in elementary school, and all of that biographical information was revealed for seemingly no good reason at all. It was as though he was talking with someone about his wife just before he took the stage, and he just kept going as though the person was still there. And he seemed impervious to the crowd's wild enthusiasm; if he were talking at a brick wall, he would be hitting the same points in the same measured tone, oscillating in a clockwise rotation around the room and making the same three gestures with his arm as he spoke. The audience's angry shouts of "MY MONEY" whenever he mentioned taxes and "CAPITALISM" whenever he mentioned cutting regulations were basically wasted; they may as well be shouting at an ottoman.

In fact, Mitt Romney was the exact same person you see on TV.

If he was presented in HD video from a screen, he would have the same amount of stage presence.Three dimensional or two dimensional, it just doesn't matter to him. The only thing about Mitt Romney that doesn't come across on television that you can see in real life, especially when he's giving your hand the allotted number of pumps up and down, is his eyes. His eyes are wet and round and sort of hungry. Not hungry like a shark. And not quite hungry like a friendly dog, either. There's something wounded in Mitt Romney's face, like he wants you to like him. But not the way Bill Clinton's eyes dip you in caramel and swallow you whole. There's no yearning in Romney's eyes, because Mitt Romney has never really yearned for anything in his life. There's a distance, almost an ironic distance. Or maybe it's this: Mitt Romney wants to want you to like him, but he can't quite make it work. It's the look you see in someone who is somewhere they don't want to be, but who wants to make the most of it anyway, gosh darn it. You see those eyes a lot at conventions, or on business trips, or in conference rooms. You don't see it a lot at rock concerts, or neighborhood bars, or on the faces of politicians.

So here are the facts of the speech, which was basically the same speech he gives a few times a day all over the country: Romney called Medved and McMorris Rodgers "real heroes." He said he stands for "hard work and education and right values." Barack Obama is "out of ideas" and he is "hurting real people" because he wants to "take America in a direction we wouldn't recognize." He says President Obama is "trying to replace ambition with envy" by making America into a "European welfare society." He said Obama has signed "zero trade agreements." (Completely false, by the way.) A far as foreign policy goes, Romney said he wants to go "back to the days of Harry Truman" where America shows strength in its military. His promise to "increase purchases of aircraft" for the Air Force came about four minutes after his promise to whittle government spending down to practically nothing. It was the same bullshit he always says, vague promises shored up by columns of rabid anti-Obama sentiment. And then it was over.

I've been to every rally held by every major Republican presidential candidate in the greater Seattle area this month. And I didn't attend these rallies in the cushy press boxes, safely back from the candidates, with a great view and perfect sound. I attended these rallies the way everyone does, among the supporters, in the thick of it, and I can tell you that I hate the Romney crowd worse than all the others. The Santorum crowd seethes with hatred, but it's honest hatred, the unabashed hatred of bigots. The Ron Paul crowd is irredeemably dumb, but they believe they're doing the right thing. The Gingrich crowd is sleazier and thinks way too much of its own intelligence, but they have that unashamed teabagger bravado going for them. The Mitt Romney crowd, simply, is wall-to-wall self-entitled assholes.

They spout bile on all their foes. I heard more birther chatter in today's crowd than at any other rally. One sign, lovingly printed on an American flag pattern and laminated by its creator, read:

Mitt Romney Has It All:
1. Birth Certificate
2. College Friends
3. A Wife Who's Proud to be an American
!!!VOTE FOR MITT!!!

The hate wasn't just for the president. An older woman said that avowed Romney-hater Rush Limbaugh "used to be great," but now he had gotten "raunchy." Democrats are just stupid and hate success: "See, they don't want this rich guy in office, but they don't realize this rich guy knows how to make America rich!"

But mostly, the Romney crowd is just fond of themselves. Everyone in line believed they were too special to be standing in line. They complained that volunteers got to get in first, when they personally knew Washington Republican Party Chair Kirby Wilbur. They grumbled about having to stand outside, and how organizers would be hearing from them. They sent their spouses out to scour the line ahead, to see if there were friends who would help them cut in for a better position. The self-entitlement was thick, is what I'm saying. There were so many centers of the universe in line that the entire galaxy should have collapsed in on Bellevue under the strain.

Behind me at the rally, as Bob Seger's "Hollywood Nights" blared overhead, a man and a woman were having a conversation about how they arrived late and cut in line ahead of literally thousands of other people to get inside.

"I just figure," the man said, justifying their rudeness, "in situations like this, you just have to fend your yourself."

The woman replied, "But if everyone did that, it'd be chaos."

Exactly. That's exactly the Mitt Romney philosophy in a nutshell.

(Find a slide show of my photos from the rally right here.)