Updated with a comment from Mars Hill Church, which was not involved in the protest. 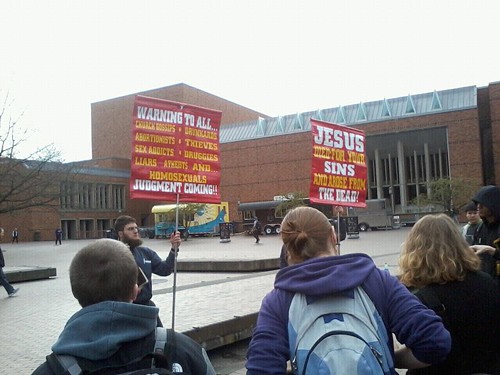 University of Washington student Sakuya Andreas sends the photo above with the touching story below of Christians on the UW campus. Truly a red-letter example of compassion:

Last week the University of Washington's FoQus group for Queer Students held a food drive for the Lifelong Aids Alliance. We raised a lot of money and food that they desperately needed, all the while being picketed, loudly, in the middle of Red Square by church folk, who were yelling that people with AIDS did not deserve to eat, condoms would not save you from hell, and that "Queers shall experience hell, along with the drunkards, druggies, STD havers, and church gossips!"

While it was horrible to hear them say as many homophobic things as they did, we'd really like to thank them for picketing so hard, because so many people came up to us and handed us a lot of cash and food donations, just to piss them off.

If you can encourage people to donate to Lifelong AA, food or cash, it is desperately needed. They help so much for people with HIV/AIDs who cannot afford food after paying for prescriptions.

We believe they are from Mars Hill, as they passed out pamphlets from the church.

Just a guess here, but Jesus would probably DONATE TO LIFELONG.

UPDATE: Mars Hill had nothing to do with this protest. Church spokesman Justin Dean writes: "We are very saddened that Mars Hill is being accused of having any involvement with this unfortunate protest. I would like to go on the record to say Mars Hill Church was not involved in these protests in any way, and that we did not distribute pamphlets or authorize any one else to distribute pamphlets at this protest or any protest."