Last Friday evening, I was on my to Intiman to see their opening-night production of Romeo and Juliet (which Charles will review in this week's paper) when I saw barricades all around the Seattle Police Department's east precinct at 12th and Pine. A small phalanx of officers on foot and on horseback hung out behind them. One officer said an "anarchist" march was on its way up and they wanted to be prepared.

When the 150 or so marchers arrived and saw the barricades, they turned and made their way to the Central District, followed by a large contingent of bike officers and several police cars. The march seemed mostly focused on protesting last week's raid on known activists and baiting police officers. There were the usual chants: "Cops and SWAT teams, we don't need 'em, all we want is total freedom!" And: "A!C!A!B!/all cops are bastards!"* Some guys dressed as clowns capered around, mooning officers and screeching: "Shoo! Shoo!"

At some point in the Central District, protesters said they'd just noticed two or three guys, dressed all in black, join the march. The newcomers spooked the some of the demonstrators, who accused them of being police infiltrators. That's not unheard of: Since the May Day smashup, some folks have been approached by the FBI and asked to provide information about the protest community. Last month, for example, a 27 year-old named Kellenn Linell said he was approached at his construction job by two FBI agents who, he said, told him: "We’re hoping we can show you some pictures of people in the Black Bloc. We think you’re friends with them." Linell declined.**

On Friday, protesters said the few young men appeared out of nowhere, were unfamiliar to everyone at the small march, and that their clothes looked suspiciously new—like central casting's version of an anarchist protester. Not that that proves anything, but it set some folks on edge. 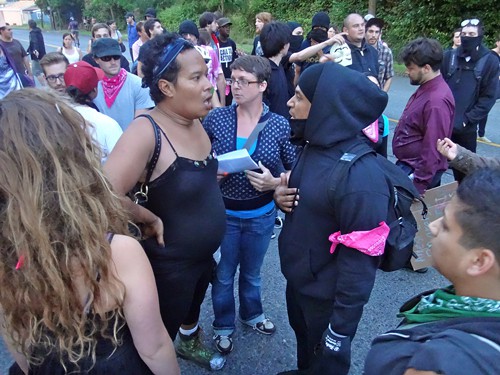 I caught up with one, who said his name was Rico.

He said he lived "outside Portland" and that he was a street artist on his way to Vancouver (or perhaps a photographer who was going to take some pictures of street art—the conversation was brief). He said he heard about the march on Facebook and that he didn't know anybody there, but his friend was waiting for him back at Westlake, where the march began.

"Well," I said, "your clothes do look like you just bought them." (Which they did.) He disagreed and pointed to some creases on his black boots. "Those aren't new!" he said. "Look at these boots!" There were a few creases.

We talked for awhile longer and Rico said: "I'm going to go back to Westlake and find my friend." He peeled off and the march went on its way, gathering a few folks as it went. It stopped in a few places, some speeches were made, and then everyone went home.

* Let's linger for a second on the popularity of this ACAB acronym: I realize that some protesters are trying to polarize people, but the old ACAB cliche seems counterproductive.

First, it's just not true. Some cops are bastards and some aren't—just like every other group of people on the planet. Some people make the structural argument that all cops are bastards by definition because they reinforce an exploitative political and economic system. But by that logic, we're all bastards. Shopping at a chain grocery store, buying gasoline, having a bank account—the stuff lots of people do all the time reinforces that "system."

Second, reckless generalizations like that tend to repel reasonable people who might otherwise become supporters of—or at least curious about—radical ideas. If it were up to me, I'd put "ACAB" to bed for awhile. But that's not gonna happen. ACAB has been popular for decades (Wikipedia says it first came from a miner's strike in the UK in the 1940s) and will probably stick around. But I don't see how it's helping.

** At the time, Linell was just a few days away from becoming a father. He said he and the agents talked a little bit about politics and they left him with this parting shot: “We don’t want you to change your political beliefs—we just want you to be careful, so you can take care of your kid.”