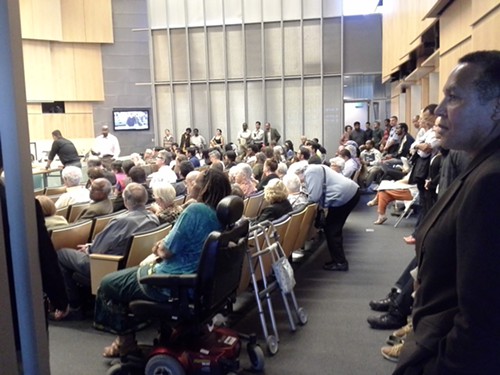 “We’re back in council chambers 13 hours and 27 minutes after we left her last night, once again to speak about Yesler Terrace," announces Seattle City Council president Sally Clark at 9:37 a.m. this morning as she convened a special committee meeting on the largest, most important development project currently facing the city.

For 70 years, Yesler Terrace has housed the city's poorest individuals and families—people who, by today's standards, make less than $13,650 annually (or $19,500 for a family of four). Now, this special city council committee is poised to forward legislation on August 16, which if approved by the full council in early September, would authorize a 28-acre development deal in the heart of the city.

Last night, council members sat through three hours of testimony on the proposed public housing Yesler Terrace rebuild, which would replace the 561-unit public housing structure with the 5,000 new apartments and condos catering to a wide range of income brackets, from the extremely low-income families that live there today to people who can afford market-rate rents.

Over 80 people testified. The concerns raised were familiar to anyone who's been following the years-long plan: that density will "destroy" the neighborhood, that "monster" towers will block out the sun, that there simply isn't enough transit (in downtown Seattle), and that it would be "cheaper to rehab" the depressing 70-year-old public housing project than to build new, mixed-use, mixed-income development (which is technically true but totally nonsensical way to build a city).

Here's the big gripe: Low-income housing advocates continue to accuse the Seattle Housing Authority—which is orchestrating the rebuild—of shirking their duties to house the city's poorest residents. Specifically, they criticized SHA for not committing to replace all 561 very low-income apartments on the Yesler Terrace site (the legislation states that all 561 units will be replaced, but up to 140 can be located within the larger, eight-block footprint of the rebuild zone—which includes several blocks east of Boren Avenue—rather than on the current site). 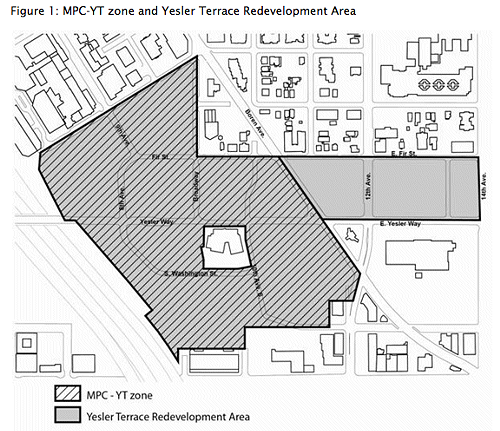 "This [project] uses city funds to subsidize a mega project that will dominated by luxury condos," testified David Bloom, speaking on behalf of the Seattle Displacement Coalition, one such group that has been historically critical of the rebuild. "It leaves less public housing on site and a conspicuous loss of trees. It's a blueprint of gentrification of that area."

The city council didn't reconvene this morning to rehash those criticisms; they met to try and address the saner ones with 16 new amendments (.pdf). But officials from the housing authority opposed some of the best.

An amendment sponsored by Council member Nick Licata to require a 1.1-to-1 replacement of all trees (basically a 10 percent increase in trees) at Yesler Terrace easily passed, as did an amendment to "enhance" surrounding neighborhoods (like Little Saigon) with parks and such, and an amendment stipulating that at least 94 of the 281 relocation housing units that must be made available to Yesler Terrace residents during the redevelopment will be two, three, and four bedroom units (to better accommodate families).

For everyone's sanity, I'm not going to rehash all of the amendments, many of which were technical wording tweaks that easily passed in committee. The most controversial amendments were tabled until next Thursday, August 16. These are the ones worth paying close attention to:

·Amendment 6 would prevent concentrating the lowest-income housing away from the downtown views. This measure would limit the number of 60 and 80 percent Average Medium Income (AMI—the means by which low-income housing peeps determine their thresholds) apartments that could be located east of Boren Avenue—the area that's not part of the original Yesler Terrace site—to no more than 20 units. "We don’t want to create a concentration of low-income housing east of Boren," says Licata, who introduced it. "I’m saying that it's a social policy issue as well as a business issue" and that the development should be as mixed-income as possible. SHA opposes the amendment, on the grounds that the original Yesler Terrace site is an "artificial barrier" and that the housing authority needs to have the flexibility to build low-income housing where it makes the most sense (and apparently, it makes the most sense to preserve the best views for the people who will pay the most for them).

·Amendment 7, also introduced by Licata, would force SHA to invest any excess funds from the Yesler Terrace land sale back into the project. "These are public funds," stresses Licata. "We do not want to see the revenue generated from Yesler Terrace being used in other locations.”

Once again, SHA is opposed to the amendment and has proposed an alternative (which wasn't detailed in this meeting), although it was unclear exactly why. “If there’s extra money, our purpose is to serve low-income folks," was all Stephanie Van Dyke, the development director of SHA, would say.

· Amendment 14 would force SHA to explore the "benefits as well as the negative impacts of leasing rather than the sale of all or a portion of the Yesler Terrace property." It's a smart amendment that critics of the Yesler Terrace redevelopment plan have long called for. At the very least, showing the math on why leasing wouldn't pencil could quell a few naysayers.

But the criticism that SHA won't replace all its extremely low-income housing on site isn't getting any traction with council members. "It's a weak argument," says one staffer, speaking anonymously. "We're talking about a site that's mere blocks away. Council members think it's more important to ensure that there's a good representation of low-income housing throughout the rebuild site."

Stay tuned until next Thursday, August 16, when the special council committee (which is just the regular city council with "special" before their names) is expected to vote on these amendments and ultimately forward the legislation for a September full council vote.