The Real Lesson from the Gonzalez Race: We Need the "Washington Voting Rights Act"

Recently there’s been a lot of talk about the State Supreme Court race between Steven González and Bruce Danielson.
On the face of it, this election didn't seem like one González should have to worry about very much. González was a decorated prosecutor, having successfully tried Ahmed Ressam, the Millennium Bomber, as an Assistant U.S. Attorney. He was also a well-known judge, having spent ten years on the King County Superior Court, earning a reputation as the hardest working and most intellectual judge on the bench. Based on this stellar resume, Governor Gregoire appointed González to fill a vacancy on the State Supreme Court. (Full disclosure: I helped coordinate González’s appointment campaign and worked on his election campaign.)
Sponsored

Deck the halls with the Seattle Symphony’s joyous Holiday Pops concerts!
Join conductor Stuart Chafetz and Broadway star N'Kenge for this dazzling program full of yuletide cheer.
As González was gearing up to run for retainment, it did not seem like anyone would challenge him. But then, at the very last minute—literally, the final hour before the filing deadline—Bruce Danielson threw his hat into the ring. Now we had a race. Danielson, a relatively unknown and unaccomplished lawyer would square off against a sitting State Supreme Court Justice. González raised a record amount of money for a primary race, secured endorsements from both parties (including Rob McKenna, Jay Inslee, Reagan Dunn, and Bob Ferguson), and zipped across the state campaigning. González had every possible advantage over Danielson, who didn’t campaign or even raise a dime.
Well, he had every advantage except one. His last name.
Which brings me to a larger issue that Danielson's unfortunately strong showing in this contest raises: racially polarized voting in Central Washington.
Government by consent of the governed is the essential promise of democracy. It's a promise that through democracy, we can produce government of the people, by the people, and for the people. These aren’t just clever words or empty phrases on ancient parchment. These are our ideals. And for centuries Americans have died to protect and to defend these ideals.
But here in Washington State, outdated electoral systems have eroded our democratic principles by failing to keep pace with our state’s rapidly changing demographics. As a result, large segments of our state’s population—particularly African Americans, Asian American and Pacific Islanders, Native Americans, and Latinos—have been virtually shut out of the political process.
Sometimes numbers don’t lie. This is one of those times. For example, in nine counties across Central Washington (Adams, Benton, Chelan, Douglas, Franklin, Grant, Okanogan, Walla Walla, and Yakima), Latinos constitute over 33% of the total population, yet hold less than 4% of the local elected offices. Combined, these ten counties elect 69 port commissioners, 66 county officers, 51 judges, and 30 county commissioners.
Not a single one is Latino.
Rarely has our state been faced with a challenge—not to its fiscal health or its economic growth—but to the values that form the basis for our democracy.
So what’s to blame? Election data shows that the main culprit is the combination of at-large elections and “racially polarized voting.”
In an at-large election, there are no neighborhood or local districts—and therefore no electoral contests in which only voters in a neighborhood or local district may vote for a candidate to represent that particular district. All the candidates must run citywide or countywide. At-large elections that exhibit racially polarized voting allow voting blocs with slim majorities to dominate local elections. In fact, in the 9 counties listed above, 99% of all local elections are at-large.
For example, each Yakima City councilmember is elected at-large—that is, each candidate must run citywide. But because white voters in Yakima tend to vote for white candidates and the Latino voters tend to vote for Latino candidates (what sociologists call “racially polarized voting”), the white candidates always win. As a result, three of the seven Yakima council members live the same neighborhood, and all seven are white. Although Latinos constitute 41% of the city’s population, a Latino has never been elected to the city council. Not even once. Many have run—but they just keep losing.
The importance of these local races cannot be overstated. It is in these local races—for city council, for school board, or for fire district—that new candidates first enter the leadership “pipeline.” Once they’ve gained local experience, they might later try for some higher office. But the pipeline’s closed off to racial minorities because nearly all of these local elections are conducted at-large.
For those of us who have been aware of this phenomenon—that is, racially polarized voting in Central Washington—the González race wasn’t a surprise. If anything, it was a surprise that González did as well as he did in Central Washington. That González lost each of these counties by a large margin is entirely consistent with the pattern of racially polarized voting that’s been occurring throughout Central Washington for over thirty years. (And you can’t blame it on partisanship because even Inslee got more votes than González in most of these counties.) 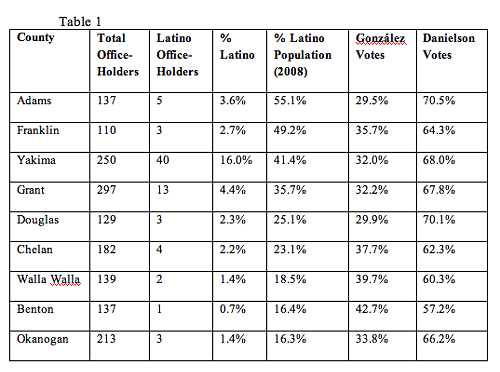 While the final result in a statewide race is different because large Western Washington counties went heavily for González, in Eastern and Central Washington, Latino candidates running for local elected office run into the exact same problem without the benefit of having King, Snohomish and Pierce County to bail them out. (The good news here is that the election also proves that racially polarized voting is not occurring in King County, where voters have a long history of voting for minority candidates such as Ron Sims, Larry Gossett, and, most recently, Steve González, who received 75% of the vote here.)
And trust me, it’s no secret. The cynics who benefit from this system—a system that effectively silences 49% of Central Washington—wink at this reality, knowing what it means for minority populations, and knowingly breaking the American promise that no matter who you are or what your last name may be, you have a right to political representation.
Fortunately, there’s a way out: it’s called the Washington Voting Rights Act. Lawmakers in Olympia considered the bill last year, but it never got to a vote. This landmark bill would allow voters to challenge those at-large voting systems that, combined with racially polarized voting, function as an obstacle to minority representation in local government. If successful, the challenges would result in new district-based election systems.
This idea has worked in the past. After encountering similar problems in their state, California legislators adopted the California Voting Rights Act of 2002. The Washington Voting Rights Act is modeled after the California version.
Some say that the legislature ought to leave it to the local governments to decide for themselves how to conduct their elections. But these advocates of “local control” are missing the point. A system that gives 49.2% of one county’s population less than 3% of its elected offices is not local control (see: Franklin County). A system that silences 41% of Yakima City is not local control. Using at-large elections to circumvent our democratic principles is not local control.
True local control would empower the people by making sure local government represents local constituencies. Under the Washington Voting Rights Act, local control would flourish once again.
The González race is a sobering reminder that our country’s first principle—that all persons are created equal—may be self-evident, but it certainly isn’t self-enforcing. We have yet to reconcile the values of the American Republic with the hopes of the American people.

More than ever, we depend on your support to help fund our coverage. Support local, independent media with a one-time or recurring contribution. Thank you!
And that’s why the steady erosion of our State’s democracy is not a Latino problem. Nor is it a Black problem, an Asian American problem, or a Native American problem. It is a Washington State problem. With this Act we can finally overcome this new barrier to representative democracy.
And make no mistake, we shall overcome.
David A. Perez is an attorney with Perkins Coie LLP. Prior to joining Perkins, he served as the Assistant Director of the Fred T. Korematsu Center for Law & Equality, where he helped author the Washington Voting Rights Act.
The Stranger depends on your continuing support to provide articles like this one. In return, we pledge our ongoing commitment to truthful, progressive journalism and serving our community. So if you’re able, please consider a small recurring contribution. Thank you—you are appreciated!
CONTRIBUTE NOW