“I think it’s a transformational moment and seismic shift to see so many folks in the world of sports stepping up and speaking out in support of equality and fairness,” gay marriage advocate Brian Ellner told the New York Times this weekend. “The world has changed.”

Ellner was reacting to the pro-marriage-equality stances taken by two professional football players. Brendon Ayanbadejo of the Baltimore Ravens has been a vocal supporter of marriage equality for years. But an open letter written by Chris Kluwe of the Minnesota Vikings defending Ayanbadejo against an attack from a Maryland state legislator appeared on Deadspin on Friday and quickly went viral. Ellner was quoted in a New York Times piece that ran on Saturday headlined “Players’ Support of Gay Marriage Alters N.F.L. Image.”

Jamie Kuntz was sitting at his mother’s house in Dickinson, North Dakota, when he read Kluwe’s letter. Kuntz is eighteen years old and has been playing football since he was eleven.

“I thought it was a real step forward,” Kuntz said of Kluwe. “Everyone feels that in football everyone is going to be completely uncomfortable with gay people. But people who play football are like normal people. They don’t care, so long as you can get the job done. Not all people in football are homophobic.”

Kuntz’s reaction startled me. Four days before Kluwe's letter blew up the Internet Kuntz was kicked off his college football team after he clumsily outed himself to his teammates and coaching staff. 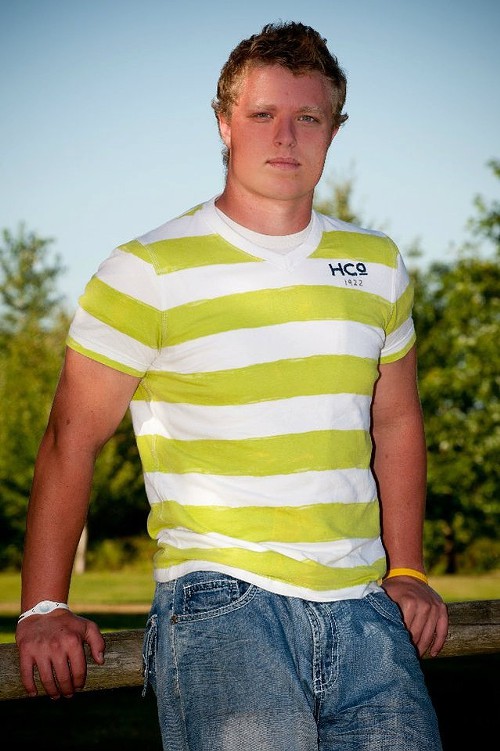 Kuntz, who dreams of being a professional football player, had offers from a bigger state school but he chose North Dakota State College of Science, a small junior college in Wapheton, North Dakota, because NDSCS offered him a scholarship and the position he wanted to play.

“My plan was to play at NDSCS for one or two years and then transfer to a bigger school," says Kuntz.

Those plans fell apart after Kuntz traveled to a football game against Snow College in Pueblo, Colorado, on Labor Day Weekend. Kuntz had a concussion and wasn’t supposed to go to Pueblo but at the last minute Kuntz was tapped to film the game. Kuntz’s boyfriend, who lives in Denver, met Kuntz in Pueblo and sat with him in the otherwise deserted press box while Kuntz filmed the game.

"We were getting destroyed," says Kuntz, "the game was a total blowout. And I guess I got bored and so I kissed my boyfriend and some of my teammates saw us.”

After the game—just before a 15-hour bus ride back to North Dakota—NDSCS’s head football coach, Chuck Parsons, pulled Kuntz off the bus and confronted him. Kuntz denied kissing the man with him in the press box and he denied being gay. Kuntz was on Twitter for most of the bus ride back to Wapheton. He sent some tweets that alarmed his roommate—Kuntz hinted at being suicidal—and the police were called. After the police determined that he was not a suicide risk, Kuntz sent his coach a text message saying that he was gay and that he had kissed the man who was with him in the press box. Kuntz also apologized to his coach for lying.

The next morning Kuntz’s coach called him for a meeting.

“He said he didn’t care what people did in their personal lives,” recalls Kuntz, “but it was a big mistake to do that on a football trip. I said, yeah, I made a big mistake and I apologized again for lying. Then he handed me a letter and said he was kicking me off the team because what I did was 'detrimental' to the team and I was a 'distraction.'”

The letter, which Kuntz shared with me, is signed by NDSCS Head Football Chuck Parsons. It reads in part: “The head coach reserves the right to dismiss any team member for any conduct that is deemed detrimental to the team. This includes, but is not limited to, any criminal charges or convictions; violations of school policies, NDSCS athletic policies, or NDSCS Wildcat Football policies… Lying to Coaches, Teachers, or other school staff [constitute a violation].” The letter continues: “This decision was arrived at solely on the basis of your conduct during the football game… and because you choose not to be truthful with when I confronted you about whom else was in the box with you.”

Coach Parsons seems to be anticipating charges of homophobia when he emphasizes that Kuntz is being kicked off the team "solely on the basis" of his conduct at the game and lying about it.

"It's ludicrous to say Jamie's sexual orientation had nothing to do with his release from the team," said Cyd Zeigler of Outsports.com, the online gay sports community. "Kissing someone during a game isn't a distraction unless it's a 'gay kiss.' And even if it were a distraction, a slap on the wrist is more than enough to get the point across. Kicking him off the team for such a minor offense comes from one place and one place only: homophobia."

Other members of the team, according to Kuntz, have been caught drinking, a violation of team rules; one member, a minor, was detained by the police after being found in a 21-and-over club. Some members of the team have “criminal charges and convictions,” according to Kuntz, both misdemeanors and felonies. Another player had a house party that was shut down by the police in Wapheton.

“Nothing happened to him,” says Kuntz. “He’s still on the team. He played on Saturday. I don’t feel that I should’ve been kicked off the team for this. It was a kiss. It was a mistake, but it was just a kiss. We weren’t making out.”

At least one member of the football team at NDSCS agrees with Kuntz. (This team member didn’t want to be quoted by name for fear of damaging his relationship with the coaching staff.) “I didn’t see anything during that game,” the team member told me in a phone interview, “but my teammates told me they saw Jamie up in the press box with another guy and that they were doing stuff. From what I hear they’re saying Jamie got kicked off the team for lying. But if he broke a team rule about lying then I think a suspension should’ve been the punishment and not getting kicked off the team.”

Would the team have welcomed an openly gay member?

“It would take people some time to adjust," he said, "but guys who have been around it already accept it. It’s not an issue for me.”

Seeing no reason to stay at NDSCS—he was there to play football—Jamie Kuntz withdrew from NDSCS two days after Coach Parsons kicked him off the team. Kuntz is living at home with his mother. She found out her son is gay when Kuntz changed the bio on his Twitter account from "football player" to "gay football player."

Coach Parsons didn’t respond to numerous messages asking for his side of the story. And Barbara Spaeth-Baum, Director of College Relations and Marketing for North Dakota State College of Science, told me the school couldn’t comment. “The student that you are calling me about is no longer a student at NDSCS,” said Spaeth-Baum, “so we are not allowed to comment about anything regarding that person because that person is not a student of ours any longer. There’s almost nothing we can say.”

When I asked Spaeth-Baum to comment on current students—members of the football team who may have violated school policies without getting kicked off the team—Spaeth-Baum cut our conversation short. “That’s hearsay and that’s not admissible evidence in any court of law,” said Spaeth-Baum. “I don’t know anything regarding the student that you’re quoting. I can’t speak to that. I certainly don’t know that.”

When I asked if I could speak to Coach Parsons, Spaeth-Baum told me that the coach isn't a spokesperson for the college. The school's athletic director, Stu Engen, is allowed to speak to the media but, says Spaeth-Baum, would not be able to comment for the same reason she couldn't: Jamie Kuntz is no longer a student.

One detail about Jamie Kuntz' story makes it highly unlikely that he will become a poster child for young gay athletes: Kuntz’s boyfriend is 65 years old.

“When my coach pulled me off the bus that night and asked me who that was with me in the press box,” Kuntz says, “I said, ‘Oh, that was my grandpa up there with me. I wasn't kissing my grandpa, I don’t know what you’re talking about.’”

Kuntz says that he has always been attracted to older men. Kuntz was 18 when he met his boyfriend online and Kuntz says he was the aggressor.

“I definitely pursued him," says Kuntz. "He’s a great guy. I love him."

"The age difference mucks up the story a lot," LZ Granderson, a senior writer at ESPN and a CNN contributor, wrote in an email. Granderson is gay and I contacted him about the story shortly after Kuntz got in touch with me. Granderson passed. A teenager football player with a 65-year-old boyfriend? "On the heels of the Sandusky trial and Penn State, that's a very high hurdle.... I'm sad for the kid but angry at the 65 year old who should have never put him in that position."

I'm angry too. Impulsively making out with your boyfriend in a press box isn’t the best way for a gay college athlete to come out to his teammates. But Kuntz’s impulsiveness—or Kuntz's recklessness—is understandable. He is a teenager. It's hard to feel anything but anger for Kuntz's boyfriend. The elder man's reckless disregard for his Kuntz's future, to say nothing of Kuntz's physical safety, is much harder to excuse.

"The age difference between Jamie and his boyfriend [probably] played a factor" in Kuntz being kicked off the team, observes Outsports.com's Cyd Zeiger. "The country, and in particular football, is on edge about this issue after the horror that Jerry Sandusky perpetrated on Penn State. What people don't want to talk about is the fact that people, gay and straight, of huge age gaps do fall in love and do have relationships. That dynamic can be scary for a coach, but at the end of the day it's none of his business."

Kuntz hopes people don't judge his boyfriend harshly. Older people can get carried away too. “And he was nervous about it,” says Kuntz. “When we were in the press box he kept saying, ‘We can’t do that up here.’ And then it just happened, out of nowhere. It just happened."

Kuntz says he doesn’t know what he’s going to do next.

“This has thrown everything out the window,” said Kuntz. “I hope I can find another school. That’s what I’m worried about.” 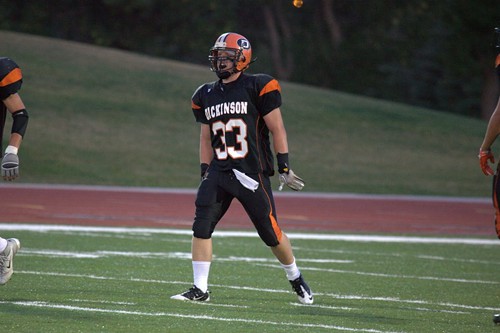