Beloved Slog commenter Alex-jon (aka Baconcat) alerted me to the fact that Patrick Plumb, the mayor of Tonasket, Washington, appears to have gone on a bizarre anti-Big Bird Twitter rant calling "libtards" responsible for PBS's "Soviet" content on Twitter. Many of those rants were directed at the satirical Twitter feed @firedbigbird. Here are screen shots of today's tweets from Mayor Plumb's account. As always, start at the bottom of the screen shots and read your way up to the top:

I sent an e-mail to Mayor Plumb for a comment about his Twitter feed and he replied:

Paul it looks like my twitter account was being played with while I was at my Homecoming Football game, I am sorry that all that stuff was out there and when I got back I deleted the account. In the future I'm not going to leave the account up for people to play with while I was gone.

I sent another e-mail to Mayor Plumb asking him if his account was also being "played with" two days ago during the presidential debate, when his account began complaining about @firedbigbird and "libtards." Here's a screenshot of those tweets: 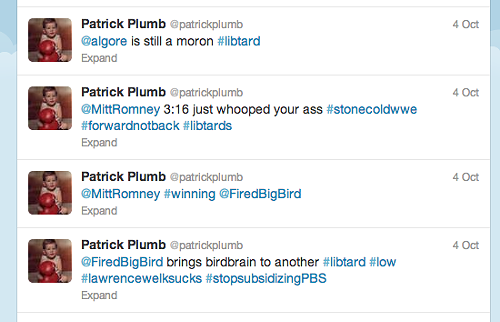 Plumb confirmed that those earlier tweets were his, but denied ownership of today's tweets:

Someone saw me doing that and took it too far. I apologized and then deleted the account after seeing what happened earlier.