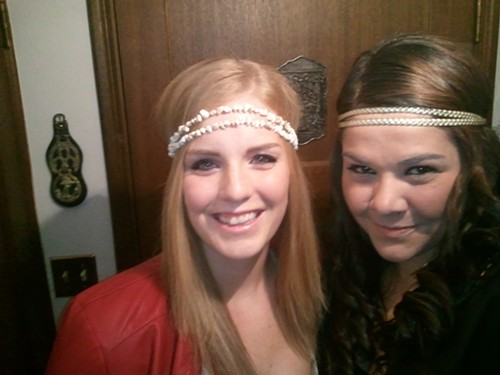 Nicole Beges and Mackenzie Stout, two straight girls in law school at Seattle University, have spent the last couple weekends in gay bars, registering new voters and talking about gay marriage. Just about everywhere they’ve gone, they’ve found gay people who didn’t even know that gay marriage is on the ballot. Beges went to Qdoba on Broadway recently, and there were “two guys working there, gay as Christmas, and I was like, ‘I spent last night working on Referendum 74,’ and they were like, ‘What’s that?’”

Beges was standing inside the gay men’s fetish bar the Cuff as she told me this. She’s 25 years old. She had a clipboard under one arm with voter registration forms and a stack of blank pledges to Washington United for Marriage to vote "approve" for Referendum 74 (with a box to check if someone wants to volunteer). Standing next to her was Stout, who is 24 and has already done some phone-banking for Referendum 74, including a memorable interaction with an Eastern Washington man who insisted that gay marriage being passed would mean legalizing incest. Looking around the Cuff, Stout added, “People are uneducated about political goings on and I think that’s a problem.”

“I met two guys at CC Attle’s the other night, two guys who’d been together for 15 years, and they were against gay marriage,” Beges said. How come? “I can’t tell you why. Something about the dollar crashing?”

“You get so used to the status quo or something,” Stout said.

“My personal opinion?” Beges said. “It’s not about you. It’s a civil rights issue.”

Beges added, “If I ever shoot out kids, I want them to say: ‘Holy shit, when you were 25 gays couldn’t get married?’”

The Cuff was just one stop among many. They were on a bar-crawl organized by Josh Castle, M. J. Romero, and Jason Jacobs, three gay guys with day jobs, a little bit of free time, and a knack for political organizing. Romero told me, “We call this Project Low Hanging Fruit.”

He said the impetus was realizing how many gay people, especially younger gay people, weren’t registered, didn’t have political opinions, and didn’t know about Referendum 74. A bar-hop was the perfect way to reach them, especially because it doesn’t cost anything: they just set up a Facebook page and called bars in advance to tell them they were coming. A lot of bars don’t want people with clipboards walking around talking to their customers, but since gay-marriage is on the ballot, gay bars have been receptive, waiving the cover charge, etc. (Other bars? Not so much. After visiting Pony and before getting down to Q, Beges and Stout decided to stop into the Elysian to try their hand with a straight crowd. The first guy Stout talked to was not registered to vote. He filled out a voter registration form while she talked about Referendum 74, and then he looked at her chest and then up at her face. A bartender leaned over and said, “What are you doing?” After Stout explained, the bartender said, “Outside. Sorry.”) 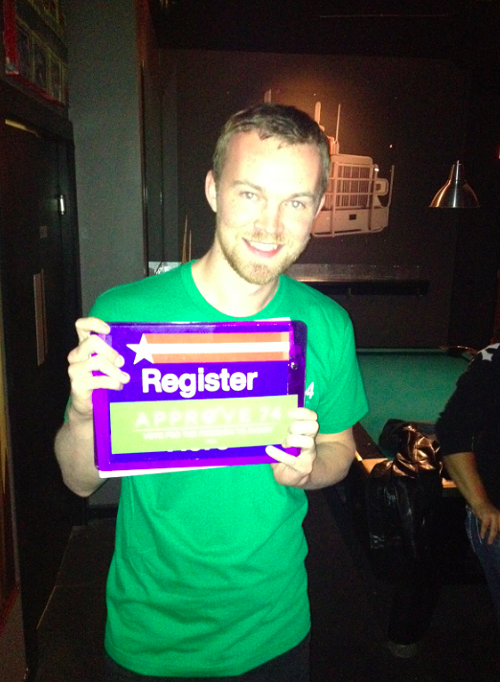 It is pretty amazing watching straight people donate their time to walk into gay bars to convince gay people to care about gay marriage. Beges and Stout have a third friend (a woman who’s dating a woman) whom they haven’t been able to convince to volunteer yet. Likewise, on another night of the bar crawl, Chris Burke, a 31-year-old straight guy and web developer, mentioned a queer friend of his when asked about why he was doing this. When asked why she wasn’t volunteering with him, there was a pause, and then Burke said, “I’m going to make her volunteer.” That particular night ended with Burke, for the first time in his life, watching two men lube-wrestle.

On yet another night of the bar crawl, a straight guy named Shane Phillips who works in a lab at UW, got into it with a gay guy at Pony who “was thinking about not voting” for gay marriage, with the thinking being that homos tend to be more promiscuous than straights. Which boggled Phillips’s mind. “Just because some people won’t take it seriously, or might abuse this right, doesn’t mean it shouldn’t be available to everyone,” Phillips reflected a few minutes later at Madison Pub. “I gain something if I live in a society that actually has equal rights. And it’s also not just about me. If I have children, absolutely I want them to be able to get married if they’re gay.” It was the night before the mail-in voter registration deadline. I asked Phillips what he was going to do once it was too late to register new voters. “I am going to do phone banking, but I’m not looking forward to it. I’m not confrontational. I’m not even very outgoing. I’m just drunk,” he said, and sipped his beer.