And Then There Were Three: Third Grand Jury Refuser Goes to Prison

Last night, Portland resident Leah-Lynn Plante spent the first of what could be a year and half's worth of nights in prison for refusing to testify before a federal grand jury about people she might know who might have been involved with the political vandalism on May Day.

That's a lot of nights for a few mights.

Plante has not been charged with a crime—in fact, the court granted her immunity from prosecution, meaning she could not invoke her Fifth Amendment right to remain silent—but she could serve time until the expiration of this grand jury. During the open portion of yesterday's hearings, Judge Richard A. Jones told Plante that might last until March of 2014. 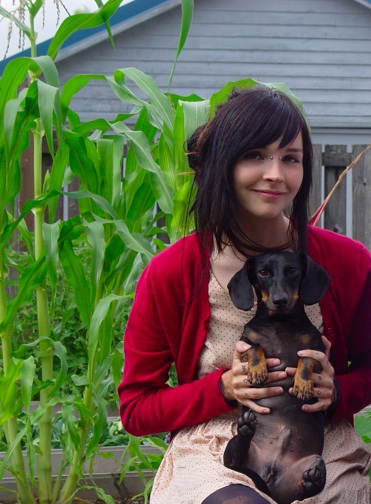 Plante is the third person to be sent to the SeaTac Federal Detention Facility for refusing to testify in this matter. At her sentencing yesterday, around 40 supporters and activists—mostly dressed in black—sat in the federal courtroom while extra security, from the US Marshals and the Department of Homeland Security, stood by. As she was sentenced, and federal marshals prepared to take her away, Judge Jones reminded her that "you hold the keys to your freedom" and that she could be released at any time if she chose to "exercise your right to provide testimony."

It was an odd turn of phrase—the same judge who, that morning, legally blocked her from exercising her Fifth Amendment right was sending her to federal detention for not exercising a "right." The 40 or so supporters in the courtroom stood solemnly as she was led away. "I love you," Plante said to the crowd, as marshals escorted her through a back door. "We love you!" some people in the crowd said. The security men looked tense for a moment, their eyes bright and their jaws clenched, ready for action. Then everyone walked out quietly, without incident.

The only federal defendant to be sentenced for an actual May Day-related crime so far—damaging a door of a federal courthouse during the smashup—was arrested in early May and sentenced, in mid-June, to time served.

Which brings up a pointed question: Why was the only federally identified May Day vandal sentenced to time served (about a month) while people granted immunity from prosecution—Plante says government attorneys don't dispute that she wasn't even in Seattle on May Day—are looking down the barrel of 18 months in federal custody? Why is a person who might know something about a crime, but steadfastly insists she has her right to remain silent, facing more severe punishment (about 18 times more severe) than the person who was sentenced for actually committing that crime?*

Minutes before Plante's hearing, her attorney Peter Mair sat, brow furrowed, in a courthouse lobby. Mair worked for years as a federal prosecutor—he's indicted the Speaker of the House of Representatives and prosecuted mobsters and corrupt government officials, and is familiar with the workings of federal grand juries.

But given the way government attorneys are using grand juries now, he said, "you could indict a ham sandwich. Defense attorneys are not allowed in, other witnesses are not allowed in... They're going to send this poor girl off to prison for a year and a half. And the great irony is that the one guy who pleaded guilty to the crime served—what? Forty days?"

He reiterated what many other lawyers in the course of this story have argued—that the grand jury system was originally included in the Bill of Rights to avoid frivolous government indictments. But, he said, federal prosecutors began using that system as a tool for investigation and intimidation during the Nixon administration: "They used it to chase dissidents."

Jenn Kaplan, an attorney who represented Katherine Olejnik—another grand jury refuser who is now in prison—also showed up at the courthouse yesterday because she was "curious" to see how the Plante hearings would pan out. "Theoretically, the grand jury serves an important function as a jury of peers to find probable cause," she said, "instead of the US Attorney using it to indict anyone at will without having to publicly demonstrate why to anybody."

The system has become, she said, "a constitutional bypass around the Fourth and Fifth Amendments, allowing the government access to evidence they wouldn't otherwise have." It is also a useful tool to intimidate people, she said, creating a chilling effect on political activism. If simply knowing someone who might be suspected of political vandalism puts you at risk of a subpoena, a federal judge deciding some of your rights no longer apply, and 18 months in jail, it gives you a strong disincentive to associate with such people.

In the end, Kaplan said, it is "far too drastic to bring someone before a grand jury" because that someone might know someone who might have committed an act of vandalism.

This particular grand jury was empaneled in March, Kaplan said, well before the May Day smashup. Some of the activists in yesterday's crowd wondered if it had been empaneled simply to investigate the anarchist community, but Emily Langlie of the US Attorney's office says "that's not how grand juries work in this region." Grand juries, she said, hear multiple cases during their tenure. While she could not specifically comment on how many other cases this grand jury was hearing—because grand juries are sworn to secrecy—she could say with confidence that it was not empaneled to look into this one issue.

Once Plante had been led away, her supporters milled around the elevators and in the front lawn of the courthouse, talking about going somewhere to get some food, and maybe a drink. One talked about an FBI special agent who, before the final hearing started, had talked with her and some of her friends while they waited in the antechamber. (I saw him at the end of their conversation, crouching on the carpet while the rest sat on a bench. As I approached, she quietly asked him: "How do you feel about the way the warrants were executed? People hog-tied in their underwear?" Perhaps sensing new ears listening to the conversation, he quietly stood up, walked away, and leaned against a wall until the courtroom opened.) As they walked out of the courtroom, a few looked a little teary.

In the end, yesterday's quietly tense saga between activists, lawyers, judges, and cops was a symphony of incongruity. Nearly everyone involved seemed to believe they were doing the right thing, and executing their duty to their larger community. Nobody was there for fun, or for greed, or anything so simple as selfishness. That collision course of ideals, which resulted in some vandalism, some raids, some grand jury hearings, and Plante going off to prison, gave the proceedings a melancholy, overcast feeling.

The guards at the security check to the courthouse—which activists and I shuffled through several times, emptying our pockets, taking off our shoes, putting our bags through the scanner—said yesterday didn't seem particularly busy. "You should see Thursdays," one said. "Bankruptcy hearings." He said those days were jammed with people.

"How long have those bankruptcy days been so busy?" I asked.

* Emily Langlie of the US Attorney's office encouraged me to "read the sentencing memorandum" for an answer to that question. The memorandum states that the defendant, Cody Ingram, was homeless, suffered from "mental health issues," and expressed remorse for his actions. The three grand jury refusers had homes, haven't been accused of any crime to express remorse about, and I don't know whether any suffer from mental health issues. But the question stands: Six weeks of detention for a crime committed vs. 18 potential months of detention without having been accused of a crime seems like a gaping disparity.