Phone Banking with My Coworkers Last Night for Gay Marriage 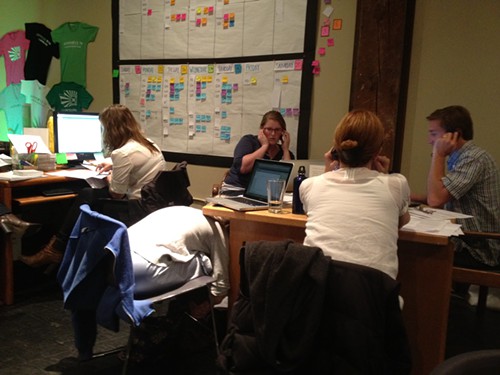 You should have heard Brendan Kiley on the phone last night—so unflappable, so smooth, so sweetly persuasive, talking effortlessly about the Bible and the Catholic faith he was raised in. Stranger publisher Tim Keck was making calls right next to me and he was amazingly friendly and calm too, talking about his kids with people who have kids, talking about hospital visitation rights, convincing more than one person strongly against same-sex marriage into giving it a second thought. A lot of voters strongly against gay-marriage have never had a conversation about it with anyone, so that's what we were doing: The entire staff of The Stranger went phone banking last night. We were planting seeds in people's minds that would maybe lead to changes of heart. There were so many of us and it got so loud in there that Emily Nokes had to duck under the desk just so she could hear who she was talking to (little old ladies talk quietly).

Everyone in the above photo is straight. Almost everyone who seemed to have good conversations last night—persuasive conversations—was straight. I'd have to go back several more times (and I plan to) to confirm this, but straight married people are the most convincing people of all on this topic. If you're a voter reluctant on this issue, or if you're really opposed to gay people, and a gay guy calls you up, well, you're going to be less interested in talking to him, less open-minded, than if, say, a straight woman calls you up. The Stranger's direction of events and promotions, Carey Christie, was awesome on the phone, cracking jokes about how getting married can be a horrible decision and shouldn't everyone be allowed to make horrible decisions; managing editor Bethany Jean Clement was graceful as ever; copyeditor Anna Minard was fascinated by the whole thing anthropologically, since she has never talked with anyone in her life who is opposed to gay marriage. Even though I had a night of rough conversations, I did not leave feeling unhappy. I left feeling grateful and proud and humbled by my friends and coworkers. Want to see another photo of Emily working hard to convince old ladies to vote? Looks like she's puking, but she's not! 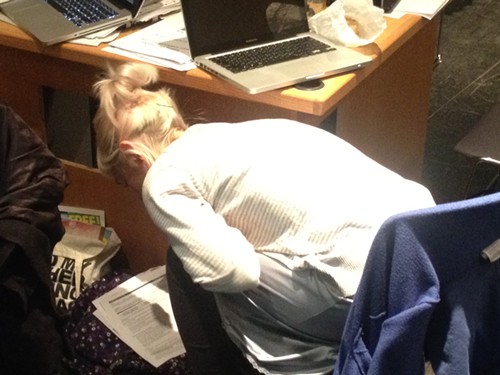 If you have time to phone bank, you should totally do it.