SL Letter of the Day: Word of Mouth

"most people's reaction is to say that I'm just so unassuming that they wouldn't expect that from me."
I would take it to heart if this happened more than once: Perhaps he is self-deprecating to an annoying degree. It's just hard to imagine otherwise that people who haven't seen him naked have strong opinions on the size of his cock.

And, yes, as 1 says, in one instance I stopped seeing a fuck buddy because his equipment was so large that every sex act was uncomfortable for me. If I was in love with him, we would have adjusted, but it wasn't worth it for the casual sex we were having.

5
I had an unassuming little French-Canadian nerd of a roommate who was apparently spectacularly endowed. The parade of ladies coming through my otherwise gay apartment proved that yes, women do pass this knowledge around to their friends.
badstone on October 12, 2012 at 12:09 PM · Report this

6
I realize that people have different attitudes about this, but I just can't imagine thinking,"Hmm, I hear he has a big cock. I think I'll sleep with him." No, I'm gonna choose the guy I like; which isn't likely to be the one bragging about his endowments.
Aurora Erratic on October 12, 2012 at 12:13 PM · Report this

7
I refuse to offer any advice to big dicked guys unless I can see a picture to know for sure.
LogopolisMike on October 12, 2012 at 12:13 PM · Report this

8
Be sure you know how to captain that boat under all circumstances. Don't just assume that you can pilot it all conditions. Practice, study, learn. Become an accomplished captain.
gttim on October 12, 2012 at 12:15 PM · Report this
9
No, don't do it! Advertising your size yourself will come across wrong, wrong, so very wrong.

It will seem like:
a) You are excessively proud of it and want it worshipped
b) You probably have relied on size and haven't bothered learning to be skillful.

14
It's not the size of the dog in the fight, it's the size of the fight in the dog. My personal experience has been that most extremely well-endowed guys are kind of pillow princesses - they're really not that great as lovers. They've always relied on their size and never learned any skills. Now, my sample size is admittedly limited, but that's been my experience.
Geni on October 12, 2012 at 1:48 PM · Report this

15
One of my most exciting and longest term partners had a very small penis (like unnaturally small). He was forced to learn how to do everything else REALLY REALLY well. Unfortunately, he hates cats...
ScienceNerd on October 12, 2012 at 2:33 PM · Report this
16
Another thing to consider: Building up people's expectations too high inevitably leads to a letdown.
Joe Glibmoron on October 12, 2012 at 2:44 PM · Report this
17
Besides, it's highly unlikely he's got the biggest dick ever.

If he stays relatively unassuming, then it's either a pleasant surprise or a non-issue.

If he advertises his primary sexual attraction as being the size of his dick, it's inevitable that he'll pretty soon be dealing with comments like "You call that big? I've had them twice that size!"
Lymis on October 12, 2012 at 3:55 PM · Report this 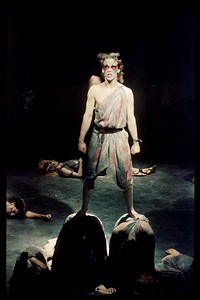 18
An old college roomie of mine apparently had a simply enormous dick. He was also kind of a geek, really into industrial music and video games. He was a nice guy. We used to abuse his trust fund and buy groceries with his BP card.

Anyway, one night after he had gone to sleep, my girlfriend and I stayed up to get drunk with his girlfriend Amanda. At some point, Amanda decided to go to bed, and I ribbed her about having sex with said roomie, and she sighed, "He's so fucking big. Sometimes, I can't face it."

Sandiai on October 12, 2012 at 7:21 PM · Report this
22
And HOW is it big? Thick? Long? If you're going to advertise your actual size to women, you should specify what kind and how much, if you're looking for women who are measuring their hookups before they hook up. If that's who you want to date.
I love girth but have had (only a few) occasions where it's a little beyond comfortable. Length is less important to me. I have to be (annoyingly) careful if it's really long, lest it bang my cervix at the wrong time of the month and set off unbearable abdominal cramps.
Any guy I've ever encountered who has been more endowed than the expected average has earned a little extra one-eyebrow-raised respect. As opposed to any guy who had already advertised that he was more endowed than average. He earned nothing because I don't know. I never slept with him, cause he seemed like a jackass who would probably suck in bed.
secretchord on October 12, 2012 at 8:11 PM · Report this

The big turnoff, and concern here to me would be a partner bragging they'd been with "at least 30" people before you - such an incrediblly tacky, douchebag move to go on about how many people you've had - and since the girl the letter writer is referring to was his first, and he doesn't mention her being older, the likelihood is she was probably really young. I think if you've slept with more than 30 people before the age of 21, this isn't something you wanna really advertise.

24
It's so hot when you hear a rumor about a guy being well-hung. But too often the reality is a little mixed -- the cock may be ugly (twisty shillelagh, deformed, etc.) or too big (which is fun to look at and occasionally play with, but just not functional). The much rarer cocks are the truly gorgeous ones -- above-average, well-proportioned, beautiful to look at. If they're attached to a fit body with an an attractive face and a wonderful personality and a big bank balance and a kind family and a decent education and a sense of humor and and and...

Just be a human being. Enjoy the gifts you have. Put away the T-shirt with an arrow pointing at your crotch.
puppydogtails on October 13, 2012 at 7:42 AM · Report this
25
As a woman who spent some time in chat rooms in her teenage years, you can't discuss sex with a guy online for a very long time before he starts bragging about his cock. Of course, they're all ridiculously huge, never mind the fact that "the bigger the better" is not every woman's motto. Be careful with sexting or any conversations with women online. If she has not asked for details about your cock, do not volunteer any information about it. And if she does, and this is a woman you might actually meet in person someday, do not exaggerate. The phrase "I've slept with a very experienced woman who told me I am huge" or even "every partner I've been with tells me I'm huge" makes it sound like you slept with a woman who was just telling you what you wanted to hear. Also sounds suspiciously like "I don't understand why you're telling me you need X in bed. All my other partners have gotten off from what we did."

Another vote for "cultivate other attractive qualities in yourself, don't talk about your cock before she's seen it, and let her be pleasantly surprised, if she's the sort of woman who's into whatever you've got going on."
procrastinatrix on October 13, 2012 at 9:41 AM · Report this
26
@23: Way to be judgmental. What exactly is wrong with having slept with lots of people? As long as she used precautions to prevent disease and pregnancy, I can't see the problem.
alguna_rubia on October 13, 2012 at 11:28 AM · Report this
27
@24: TWISTY SHILLELAGH. Forget the old formula with your childhood pet and street name--this is my new porn-star name. Or really, it should be a porn site. It works for every gender, kink, and orientation.
Prettybetsy on October 13, 2012 at 6:53 PM · Report this

As for HH's problem... It doesn't seem to me he is having any problem to meet consenting sex partners the way things are now. Why is he asking this question? If HH is satisfied with the amount of sex he's been getting from his lucky ladies, why should he wonder about whether or not mentioning his dick will improve his success rate?

Unless he's one of those people who think the more the better (a philosophy I tend to disagree with), I don't see any reason to start mentioning his cock early on. Even if he comes out as unassuming, he is socially connected, has friends and sex partners. I'm afraid that, if he suddenly started talking about his big cock, he might then start losing both... By all means be confident, but being confident doesn't mean bragging about your sex organs.

So, unless someone asks him directly about his cock... why not let things go on as they have thus far? As Dan said, your first girlfriend is already talking about it, and good word of mouth is the best publicity. Smile confidently and walk tall, but don't brag.

No, you'll turn into Jonah Falcon.