A Day and a Night with Eileen Myles and Maggie Nelson

"That's the core question: What's the point of putting women's work together?" asked Eileen Myles, strutting through Elles at SAM yesterday. Myles doesn't try to strut, she just is one big strut, cool like that.

What the fuck is this? she wanted to know when she came upon this wall text SAM created:

Myles is a working-class poet with Boston accent lingering. She once ran for president as "the first openly female candidate," as Seattle Arts & Lectures manager Rebecca Hoogs introduced her brilliantly last night at Benaroya Hall. Hoogs was also introducing Maggie Nelson, a younger poet/writer and friend of Myles who wrote the amazing 2011 book The Art of Cruelty (which I used to help think through "216 Nipples Later").

The two—both of whom have written extensively about art—were supposed to talk about their responses to Elles at Benaroya. Nelson flew in too late to see Elles before the talk.

But Myles was all over Elles yesterday morning. On the third floor, where SAM has turned its modern and contemporary galleries over entirely to women artists, Myles loved seeing the large, bright abstractions by Joan Mitchell and Helen Frankenthaler (and to read wall text that talked about female abstract expressionists as forging American, as opposed to European, identities as artists at least as much as identities as women versus men in art).

Myles said she saw "lost opportunities" for connections with contemporary female artists ("Shannon Ebner should be next to Agnes Martin," she said). And she wanted to know whether SAM intends to buy any of these pieces, to increase the sorry quotient of female artists in its own permanent collection. I would like to know the same thing.

Upstairs in the Pompidou's version of Elles, Myles dug individual works but could detect no governing logic except for a troubling emphasis on women artists depicting women's bodies—which is a mere subset of what an artist like, say, South African painter Marlene Dumas creates. This focus on images of women's bodies reminded Myles of one of her experiences in publishing over the years: Publishers always want an image of a woman on the cover of her books, which she finds bullshit. 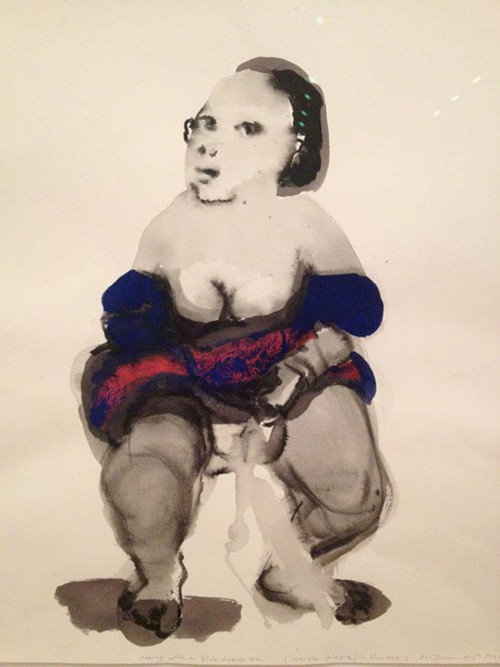 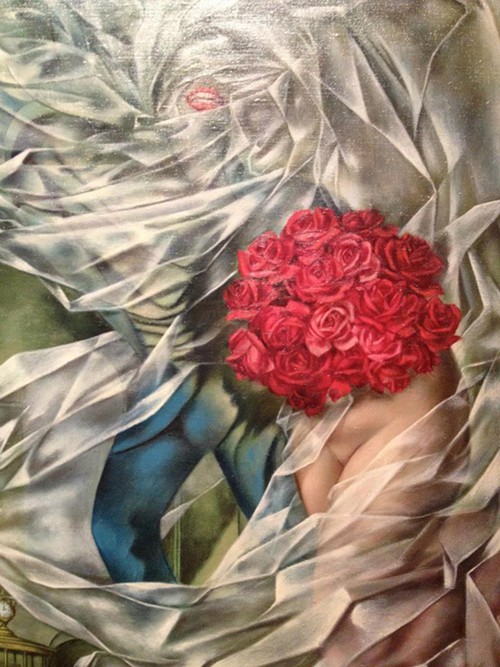 At night, to a packed crowd at Benaroya, Myles read new poems and pieces from Snowflake/Different Streets (Wave Books) and Nelson read from the great Bluets (also Wave) as well as a short excerpt about WACK! Art and the Feminist Revolution from The Art of Cruelty.

Myles began the night by stripping her sweater off at the podium. It made things "more intimate," she announced with a grin. (She ended the night in an armchair from which her feet did not touch the floor. She wore red and white striped socks.)

There were so many fragments of writing and talking flying by. I tried to catch some.

Myles: "I missed the whole brouhaha about conceptualism because I was sleepless and corny."

Myles: "We shuddered till you went."

Myles: "I used to think Mark Wahlberg was family."

Myles: "Everyone's phony and made-up. Everyone's a monster like me. Now I know everyone."

Nelson: "Loneliness is solitude with a problem."

Myles: "I don't see how people don't write about sex. And also, when are you not writing about sex?"

Nelson: "A poem never feels alive unless it's constructed through all these dirty connections. ...I feel in some ways I haven't started writing about sex."

Nelson: "With Wave Books, it was the first time I've felt like nothing about me or the book had to be in drag."

Nelson: "Rather than 'This is shocking,' a more interesting response to a work of art would be, 'I haven't seen this before.' You should see Carolee Schneemann's Infinity Kisses."

Myles on the election: "We won. We meaning everyone who cares about women being central citizens in our country."

Myles: "I think more Buddhist than I sip Buddhist."

What are they working on next? Hoogs asked, finally. (Note to Hoogs for future: When the artists don't seem to embrace your pre-written questions, ditch your list and just talk to them.)

Myles went on a retreat that involved living in her own New York neighborhood as a homeless person, alongside homeless folks. She's writing a 100-page essay about the weeklong experience called "Street Retreat."

Nelson is supposed to be writing a book called The Myths of Freedom. But she is stalling. She's instead gearing up for a fight with this guy about this book's ideas, especially as a recently minted lesbian mom. Does kid-having have to be so heteronormative? she wondered.

Was there anything they didn't talk about?