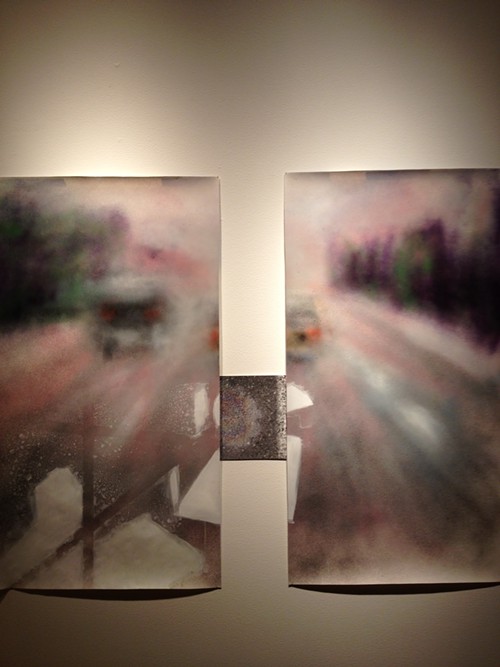 Shaw Osha teaches at Evergreen, so she commutes often on a rainy I-5. This is a portrait of her commute. It's a washy spraypainted version of a photograph she took from inside the car. While she was making it in her studio, light from the windows kept falling on the work in progress. So she painted those shapes on the surface, too. In the lower left you can see the windows' mullions. It's a moody, emotionally moving painting; maybe it's also moving because it moves you around as you take it in.

It's showing at the Hedreen, in the group show The rug pulled out from underneath; you lie on the floor, which is obliquely concerned with the destabilizing of what it means to be male or female. (More on that.) After Osha painted her landscape, she sliced it in two and wedged between the halves an unframed photo of an iridescent oil spill on a slick street. What the oil particles do is the same as what the tiny dots of spray paint on the paper do—separate and join at the same time, dissipate the scene as they build it. Keep it in motion. The stereovisual of the rainy freeway has similarly been split apart, but you put it back together mentally even though there's this wet snapshot stuck in the middle like a groin. 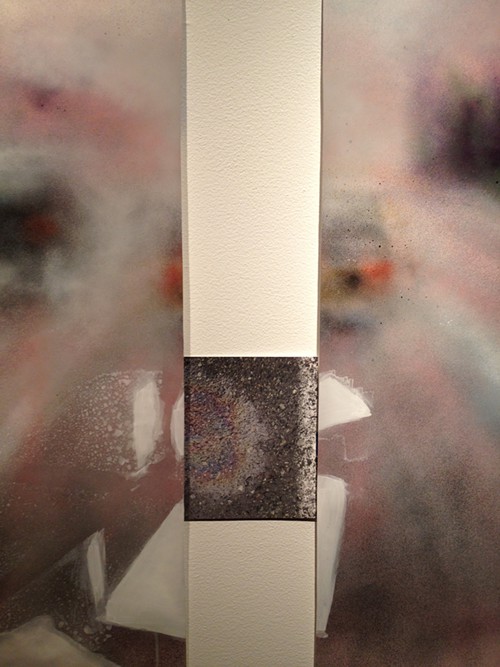 Doubt, change, and instability are some of Osha's intended subjects. On her web site is the 2011 series Everyone Loved Us, Now Everyone Hates Us, blurry portraits of people and objects with handwritten, bubble-letter captions: "Juan Williams was fired by NPR for comments he made on Fox News," "Explosives found in parcels meant for U.S. delivery," "Pontiac, 84, Dies of Indifference." The words were lifted from the headlines but adapted into the typography of notes dreamily drawn by middle schoolers. The subjects are awash in the acrylic that's making them up. Osha used to be a pediatric nurse, for many years. Here's another series of her paintings: Hospital Polaroids.

Osha is an East Coast transplant, a native New Yorker; * and I'm hoping she'll stay awhile. She had a solo show this spring at South Seattle Community College, and she co-curated The rug pulled out with Dawn Cerny.

If you like, you can commission her to paint your ear. The cost is only $400. Do you hear what I hear? 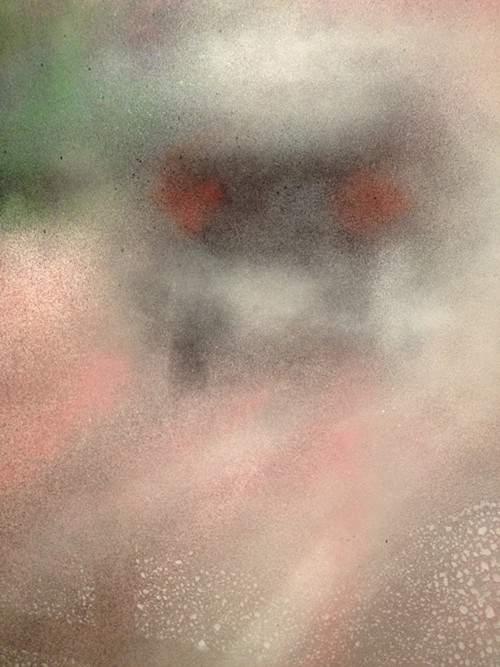 *Osha tells me she began coming up to Seattle in 2009, but she's been in Olympia since the late '80s. "I have always maintained more connection to NY and now am making connections in Seattle. So in a sense, I am new to Seattle," she emailed. Got it! Sorry about the error.