I Was at the Shooting at Twilight Exit

I was at the Twilight Exit with my friend Lexi, sitting at the wedged-in end of the horseshoe bar. A young man in a white shirt came in early on, he seemed tense. He sat at the bar but left after not even a minute. Later on, a really beautiful young woman came in, she was on her cell phone and sat close by us at the bar, and just after that, the guy came in again. He brought his face close to hers and yelled, "You left my door unlocked and everything got stolen. They took my flat screen. Why did you leave my door unlocked?" The woman didn't hang up her phone, her face was blank, she appeared calm, she wouldn't look at his face. She said, "I don't know you. I have never seen you before in my life. I don't know this guy. Someone call 911," in a really flat, soft voice, and the bouncer led the guy off.

Lexi said, "I think she's lying, it looks like she knows that guy." I said, "Yeah she didn't seem surprised or confused like you would if someone you didn't know got right into your face like that."

Things calmed down right after the man left, and we shrugged it off. Something like 20-30 minutes later, we heard a popping sound, like a fire cracker. We couldn't see exactly what was happening, but I suddenly felt panicked, and Lexi and I crouched down on the floor, we were trapped in the back corner of the bar. The young man walked towards us, he was holding a gun. I saw the beautiful girl was next to me, on my left. Our shoulders were touching. I saw her long black curly hair. As we crouched on the floor, the man was standing over all of us with his gun. He was hyper focused on the girl, and then I jumped up and ran past him. Before I got outside, I saw a pool of blood on the floor of the entry way. I tucked myself behind a dumpster and saw the bouncer laying near by. He was covered in blood, and another man was kneeling over him. This man handed me his cell phone, it was already dialing 911. The cell phone was smeared in blood, it left blood stains on my hands. Lexi came out after that, and just after that, the cops showed up in the alley, one pointed his flashlight at me and I held my hands up, and they gathered us together for questions. Lexi was barefoot because the woman who'd been shot had fallen on top of her, and as she struggled to leave her shoes somehow came loose and fell off beneath the woman's body. More police and medics arrived, and later, I watched the bouncer and the girl being transported on stretchers into the ambulance. 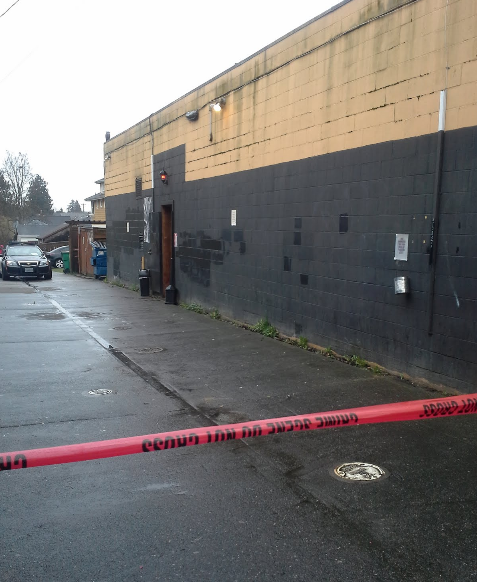 Pic by Charles Mudede
The Stranger depends on your continuing support to provide articles like this one. In return, we pledge our ongoing commitment to truthful, progressive journalism and serving our community. So if you’re able, please consider a small recurring contribution. Thank you—you are appreciated!
CONTRIBUTE NOW