On Sunday, a city block was shut down for Seattle Art Museum to unveil its big new outdoor art installation MIRROR, by the international art star Doug Aitken.

Crowds gathered and waited for the sun to go down—this art was so big, it was cosmically connected. Rich people in business wear stood on a raised VIP platform so they could see best. Here they are, in a picture taken by a Seattle artist stuck standing behind them.

That rectangle on the side of the building interrupted by the SAM letters is the video screen where MIRROR plays. MIRROR is a permanent installation. It also includes ribs of light that climb up the building.

Adjectives were slathered upon us by museum director and mayor. MIRROR is "landmark," "exciting," "auspicious." Aitken is "thrilling" and "exciting." Seattle is "amazing." SAM is "wonderful" and "dynamic." (At this point in my notes, I scribbled, "What are the two nipples up top?" in reference to two dots at one of the tops of the ribs that were distracting me. Their purpose is probably banal. But they're pleasingly un-hard-edge on the WaMuTower box.)

Charlie Wright got onstage. He's head of the board and son of Bagley and Virginia Wright, and he explained that his father commissioned this piece five years ago almost on impulse, after an impassioned pitch from Aitken. That meeting would have been on the heels of Aitken's 2007 spectacle Sleepwalkers, which projected gigantic movies on the side of the Museum of Modern Art in New York. Bagley didn't get to see MIRROR; he died in 2011.

As Trent Moorman explained in a Stranger interview with Aitken this week, MIRROR plays hundreds of hours of footage shot in and around Seattle: downtown intersections, port cranes, water, mountains. The footage is mixed by an algorithm that Aitken declined to explain in detail, but which Moorman writes "detect[s] changes in the building's surroundings, such as weather, traffic, and light." Aitken intends it to be, Moorman writes, "an urban earthworking mirror that reflects the changing rhythms of the city."

But Aitken adds that MIRROR is not like the classic earthworks that influenced him because it is local. He calls it "a living composition." Here is Aitken:

I became interested in the legacy of people creating urban earthworks—people like Michael Heizer, Robert Smithson, James Turrell—their pieces are very much about the place that the viewer does not live. They're about the journey to reach that remote place to encounter that sculpture or invention. With MIRROR, I was more interested in the idea of using the landscape right around here. Let's use a street that you might pass by every day, or something that you see out of the corner of your eye. That requires you to make a different kind of language.

When the show began, there were two parts: art and music. They were supposed to be working together, but I think that was more conceptual than actual (I will explain in a sec), so—first, the visuals. 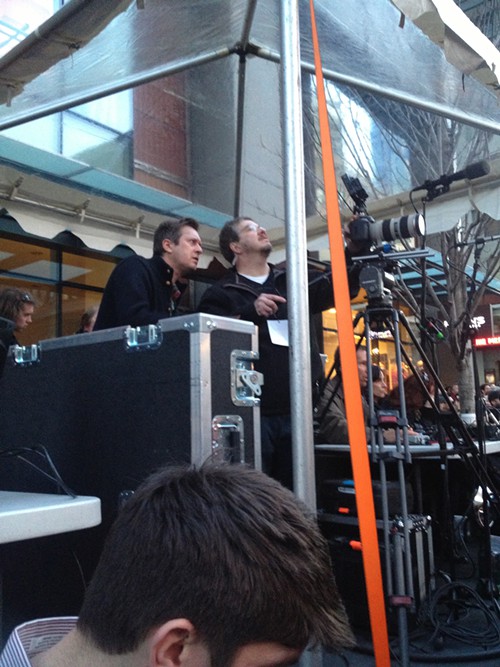 Well, there was a giant screen playing footage of the Northwest. When the footage was from inside the city core, it was in black and white. When you were in the mountains or by the water or et cetera, you were in color. Optical effects were applied to the footage so that it broke apart and multiplied and kaleidoscoped continuously. Skoshes of light flew up the ribs as if that little Photoshop tool were sampling from the main picture to feed the rib palette, keeping them in sync. (I don't know if that's what's actually happening; again, word on the street is that Aitken is loathe to share details about how MIRROR works.)

After all that buildup of energy, the video performance itself was pretty enervating. The footage felt like it was shot by an out-of-town director making a movie set in "Seattle"—which it was. The fact that slowly dawned on me during the hour or so of the performance Sunday night is that if MIRROR is ever going to become "of the landscape right around here," it will do so over a long period of time spent being part of that landscape, playing on the street where it has come to live permanently, and almost in spite of Aitken, who whatever his other intentions is also a poster child for the globe-trotting-biennials-and-art-fairs, home-less, jetsetting art world of the early 2000s. (He's "based" in LA.)

What I was more excited by was the appearance of Terry Riley, the Santa Claus of musical minimalism, leading a performance of his 1960s classic work In C right there on the makeshift stage in the middle of First Avenue: He was the "beautiful girl" doing "The Pulse" of the piece! In C can go on for hours if that's how it goes. It's a composition with a given number of instructions, but its final structure is determined by the players themselves, how they play it that day. Hence the nice conceptual link to the changeability of MIRROR, even if we don't really know what exactly dictates the changes in MIRROR. Riley's In C was preceded by another touchstone of musical minimalism, Steve Reich's Clapping Music, also based on variations within a very tight structure (in this case, that the only instruments are hands, and that the performers shift along a set rhythmic structure until they've come full circle around to where they started, in unison).

What's the meaning of all this minimalism when you pair it with corporate architecture? Oh, that's another commonly asked question—one from back when minimalism was in its heyday, in the 1970s. Let's not belabor any points. MIRROR is not yet worth the hype. And is it titled right?

Here's some video from close to the end of the performance Sunday. Riley stands up in the middle and starts waggling his arms in a conductorial way. The footage you see at the start, if you can't make it out, is snow-capped mountains being chopped up and remixed, which is handsome and rather Rorschachily nice (see Susan Robb's Masked Infants Milking the Earth or any of the Penetration events).