Art in a Van, Man 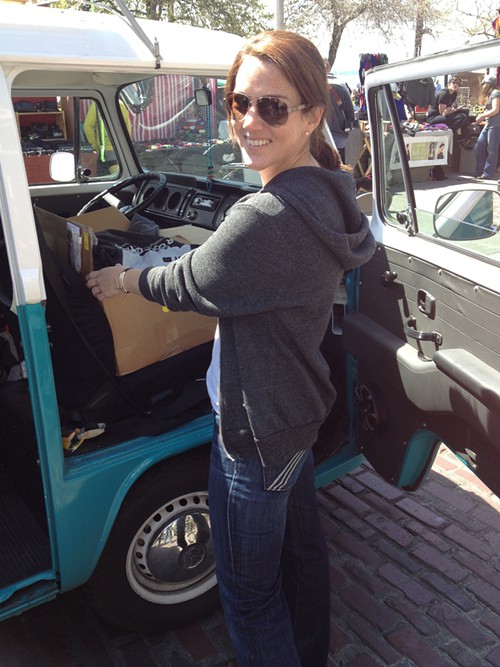 Artists are always trying to get somebody to consider what they've made, even just for a second. (Have you listened to the second act of this episode of This American Life? You must.)
Sponsored

"Can I interest you in some free art today?"

That's the refrain of the five Seattle photographers stationed outside an aquamarine 1977 VW bus next to Cal Anderson Park this afternoon. Earlier they were at Pike Place Market, but they were asked to relocate by complaining vendors. No problem. Jennifer Schwartz packed up the bus and came up the hill to find another high-foot-traffic area. Seattle is one of 10 cities she's visiting on her Crusade for Art, "a passion project," she calls it.

In advance of her arrival, Schwartz picks five local photographers. Each brings 10 prints, all the same image. They ask people whether they want to stop and talk, people say yes or no (mostly no, but it's only 10 anyway), and if the people want the print after hearing about it, they can take one with them. The artists can exchange information with their new "collectors," if they want to.

"Maybe somewhere down the road it will change the way they feel around art," she said, wearing sunglasses and jeans and acting as a street dealer who charges no fee and takes no cut.

This is what she did rather than stationing herself at IKEA.

"If I could stand at the register at every IKEA in the nation when people were up there buying their mass-produced tulip posters, and I could stop them and say, 'Hey, here's this original artwork and here's the artist,' I really feel that most people would choose the original," Schwartz said.

Schwartz has a gallery specializing in emerging photographers in Atlanta. It's simple: Emerging artists need emerging collectors. "How do you find people that aren't looking for you?" she said. Crusade is how. She bought the bus on eBay and set out for two total months on the road (away from her husband and three children). Her next stop is Chicago. 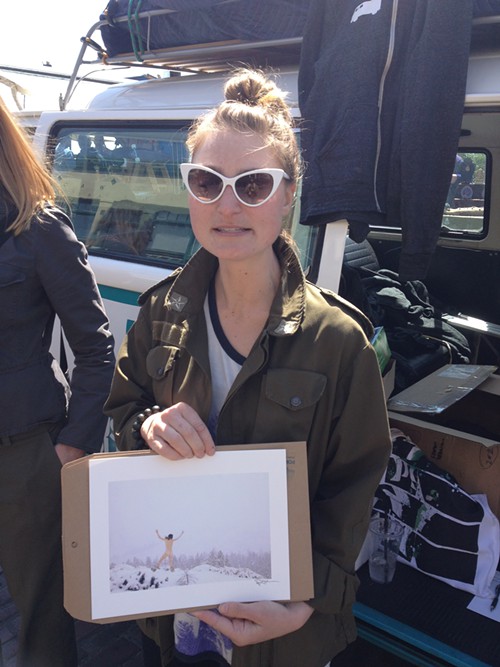 The Seattle artists featured included Rebekah Rocha, who brought a tintype of a dead bird (she's also working on a series of people in their backyards); Larry Larsen, a street shooter who's a retired boilermaker welder and therefore probably responsible for the light you're experiencing if you're sitting under one in Seattle right now; and Ray Rogers.

Rogers brought along an image of a frolicking naked person in a white-out storm in the mountains. The figure is seen from behind, wearing snow boots and throwing up hands. The gender is not quite definite. Rogers explained it's a self-portrait she shot one day when she was all alone in the Cascades. As the snow came down, she turned a stump into a makeshift tripod and let loose. The portrait has a certain something.

"Making self-portraits with a camera has helped me to see myself with totally different eyes," Rogers said brightly, giving her thoroughly lovable two-minute artist lecture at this pop-up shop. "It's so much different from seeing yourself in a mirror."

Art, ladies and gentlemen. Come and get it.