We're currently in the middle of this summer's Seattle International Dance Festival, produced by the Khambatta Dance Company. Last night, critic Melody Datz went to see one of its "Spotlight on Seattle" events, in which local choreographers curate an evening of some of their favorite performers. This round was curated by Stranger Genius Award nominee Amy O'Neal. —Eds.

SIDF's "Spotlight on Seattle" series is smart. Each event is curated by a local choreographer, giving us a peek into what inspires her or him. Tuesday night's curater was Amy O'Neal, who commissioned each dancer to create and/or perform something specifically for this event—but, apart from a brief tech rehearsal, O'Neal hadn't actually seen the pieces. It was a well-placed leap of faith; she reached out to numerous colleagues to participate. Not only did most of them respond—"way more than I bargained for!" O'Neal said—but they did so with little direction other than: "Go make something and keep it under ten minutes."

The performance felt like speed dating—a rush of ten intensely personal dance solos performed by their choreographers in a breathless race to an hour-and-a-half finish line. I left with a mess of disjointed reactions—some of the pieces were freaking awesome, some were disturbing and confusing, and during others my mind wandered off the stage and into fantasies about what pasta sauce recipe could best utilize the overabundance of sage in my front yard.

Shannon Stewart had a cool way of making it seem like she was controlling the stops and starts of the music with a flick of her arm in her excerpt from Come. Get. To. This. The piece began with Stewart standing stock still as some dreamy music by composer Sam Mickens played on a dark stage. The music stopped and Stewart performed some standard contemporary-style choreography in silence, which sounds like it could be boring, but the lack of music forced attention to each movement and revealed an incredibly lovely dancer with an ability to make classical movements seem new and super rad.

Jody Kuehner—aka Cherdonna Shinatra of Cherdonna and Lou—turned her glamour inside out, showing a creepier side of what it must be like to live underneath her iconic sparkly, painted-on smile and gigantic blonde bouffant. The piece started with typically showy song and glammy hip-shaking, but then devolved (or evolved?) into a panicked, disparate series of movements: athletically flinging herself up and down and around on the floor, then standing and lip-synching to a song about zombies.

Corrie Befort’s piece, Aphorisms, blew me into a dark, confused place for the evening but I kind of liked it. Her costume in one of the sections was a sort of love child between a Pokemon and a potato, but with numerous penises that extended and retracted in various directions. In other parts, Befort's piercing, expressionless gaze right into the collective forehead of the audience gave the piece an upsetting and creepy edge. Her angle-ridden choreography changed paces faster than my mind could register a reaction—at one point, she spun her arms wildly and at others she moved so slowly that the space between her body parts seemed to be the performing entity, rather than her arms, legs. etc.

And there's more to come: Tonight's "Spotlight" is curated by Pacific Northwest Ballet's Kiyon Gaines, with performances by Ashani Dances, Badmarmardance, Coriolis Dance, and more Shannon Stewart. Also, Amy Johnson will perform Madman, as "inspored by the 1912 Technical Manifesto of Futurist Sculpture... and made within the guidelines of the Manifesto and choreographically shaped by its rules." 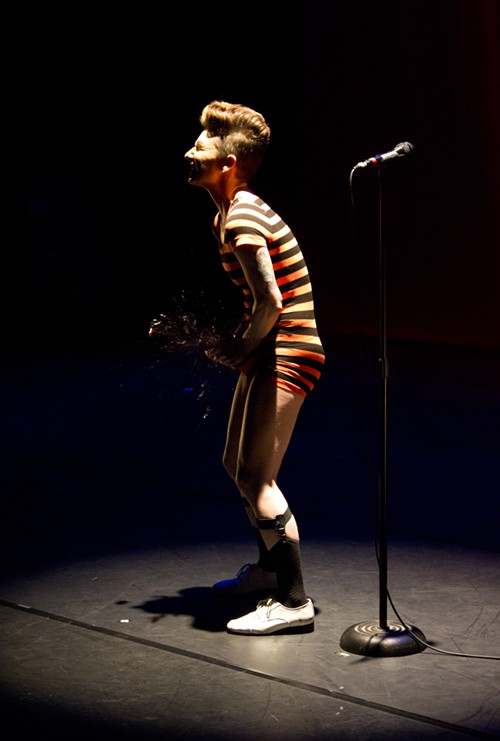