Dispatch from Istanbul: At a Standstill

By now, most of you following the events in Turkey have probably heard of Erdem Gündüz’s “standing man” protest which occurred Monday night in Taksim Square and has since been imitated around the world. Those who want the details can read about them here. In the days that have followed, standing has become the protest method of choice in Turkey. Deputy Prime Minister Bülent Arinç (whose last name sounds like a Northeasterner saying “orange”) has even condoned this new form of protest.

I took a stroll to the square on Thursday night and was pleasantly surprised with what I saw: In the center of Taksim, facing the Atatürk Culture Center—which Gündüz also faced during his five-hour stand—a few hundred people were gathered, some with balloons in hand the colors of the Turkish flag, some reading books, others simply staring ahead. In one corner of the square there was a pair of shoes left with the remains of candles and flowers which must have been part of a vigil for fallen protesters the night before. 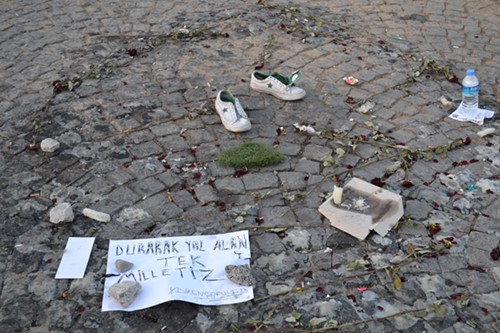 Wandering over to the entrance of the recently-cleared Gezi Park, I found a sign announcing that the park was being “renewed” by the city.

Midway up the marble stairs at the park entrance, a series of plastic chairs with police tape stung between them prevented anyone from venturing further. At the top of the stairs, policemen in regular uniforms (no riot gear) were seated in a line of plastic chairs, apparently enforcing this ban on pedestrians. Is this what the Prime Minister meant when he said he would “return the park to the people?”

I decided to perch on the lowest of the steps and stand a little myself. So for ten minutes between 8:45 and 8:55, I stood amidst a barefoot young woman, a man holding an Italian “peace” flag, a man reading a Turkish comic magazine called Penguen, and a pair of women chatting directly to my right. It was probably the single most pleasant ten minutes I have spent since the protests began three weeks ago. There was a breeze blowing and a stillness in the air. At exactly 9 pm—the same time that my own neighborhood resounds with the banging of pots and pans each night—the red and white balloons were released into the air, mingling with the seagulls.

The most amusing thing about the situation in the square was how bored and useless the police seemed. Some of them chatted with one another, some checked their text messages, and a few scrutinized the standing protesters. The Turkish government certainly didn’t predict that passive resistance would be the demonstrators’ next “move,” and in anticipation of the marches they had seen up until now, purchased 150,000 additional canisters of tear gas and 40 new TOMAs which they may not have a chance to use.

This is not to say that all movement has ceased in Istanbul or in Turkey. A couple of marches have occurred in the past days—including one in the city of Eskisehir in central Anatolia—and been met with the usual tear gas and water cannons. The wheels are not necessarily slowing down, but people seem to be reconsidering the effectiveness of past efforts. Forums have begun to pop up in parks across Istanbul, guided by the slogan “Every park is Gezi Park.” It is hard to say what the outcome of these forums will be, considering the movement is no longer centrally organized. An attendee of one such meeting earlier this week told me that more time was spent discussing the process that determined who would speak next and for how long than on the question of how the movement was to proceed.

These park forums have also already met some resistance from outside. The other evening in Yeniköy, a neighborhood further up the Bosphorus, a group of 30 people (presumably supporters of the AK Party) broke up one of the meetings, accusing the forum of “following the Greeks,” which was meant in a pejorative sense, and telling them to go to their own neighborhood parks.

But it is clear to many what the priorities of the movement need to be. After three weeks of protests, it doesn’t appear there is any chance of the current government stepping down, but the length of their reign and extent of their power can be checked several ways. Next March is a local election which will determine the mayor of Istanbul as well as the various district mayors. Then, 2015 will bring the election of congress and the prime minister (the president of Turkey is appointed by the new congress rather than popularly elected). What is needed for these elections to be a success on the part of the Occupy Gezi movement is a new party with an umbrella wide enough to fit all the people the Prime Minister has referred to as “marginal,” “hoodlums” and “terrorists." In other words, a party for the people. 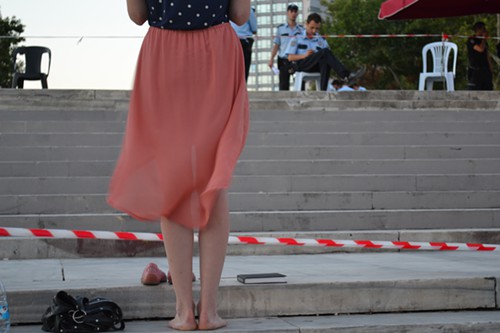 Since writing the above, a group of thousands has walked to Taksim Square with the express purpose of laying flowers in the square to honor those who have died since the Turkish protests began at the end of last month. The police, in their fashion, accused the people of "occupying a public space" (oh, the irony) and then began spraying them with water cannons when they did not disperse. A few hours on, it looks like the kind of gas-filled night Istanbul experienced last Saturday.

So much for standing.