The Deep and Morally Troubling Chocolate 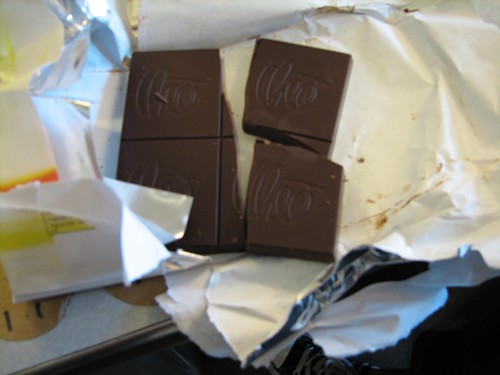 A few days ago when I left my house, I forgot to bring money. I asked Ansel Herz for a loan, and he gave me 10 bucks, along with the kindly reassurance that my embarrassment was just a by-product of the distorted value placed on money by the capitalist system.
Sponsored

Despite his lack of concern, I felt the need to show my gratitude, so when I paid him back, I gave him a chocolate bar purchased from the eminently virtuous Central Co-op.

When I saw the enticing display of Theo Chocolate (on sale! $1.30 off!), I had a vague recollection of Goldy’s post on the controversy surrounding an International Labor Rights Forum report about how they treat their Seattle workers. However, being broke, I went ahead and bought it anyway; I didn’t think anyone would notice.

When Goldy was offered a piece (Ansel’s a generous sort), he refused, launching into a lecture about the hypocrisy of a company that aggressively touts its “fair trade” philosophy while treating its local workers in a manner that—in his opinion—is less-than-fair.

I like worker’s rights as much as the next progressive lefty. But I also like chocolate. When I have extra money, it’s often spent on restaurant meals, wine, coffee, and, yes, chocolate, not all of it fair trade. I’m aware that much of what I eat has most likely, somewhere along the supply chain, caused harm—whether to the field-mouse squished by a combine, the fish poisoned by toxic run-off, the impoverished farmer toiling for depressed wages. Even the most conscientious, ethically consistent vegan will, at some point, buy something that doesn’t fit with their moral framework. Indeed, the ability to buy everything local/sustainable/fairly traded is a distinct luxury: Wealth and privilege make it possible to be a discerning consumer.

Food and eating, as universally well-liked as they are, are fraught with deep and troubling moral questions. Is it better to buy union-friendly fair-trade chocolate from, say, QFC, or hypocritical Theo Chocolate from the Central Co-op? How can you tell if something labeled “fair trade” really is? Is it preferable to subsist on low wages as a social worker and be forced to buy food that might be factory-farmed, pesticide-laden, and genetically modified, or make your living as a corporate attorney so you can afford eco-friendly mattresses and an electric car and fair-trade everything?

I haven’t even come close to resolving this dilemma for myself. I don’t eat meat that isn’t locally raised and humane-certified, but I’m under no illusion as to the largely symbolic significance of that choice. I’m pretty convinced that many of the decisions we make in this realm—avoiding chocolate from Theo because of its recent visibility for controversial treatment of workers, not eating factory-farmed meat because of the “ick” factor—are mostly symbolic, and often canceled out by other choices we make (driving cars, buying clothes of dubious provenance, spending money at the bar instead of donating it to Planned Parenthood, etc.). What is clear is that putting your money—literally—where your mouth is, is extremely tricky.