2
I think it's just darling. Wiki suggests that union's once again an AFL-CIO affiliate after SEIU failed to absorb it, having to return to UNITE HERE its Manhattan headquarters and $75 million worth of assets. http://en.wikipedia.org/wiki/UNITE_HERE
TomJohnsonJr on July 30, 2013 at 1:27 PM · Report this

It's what McGinn is all about.

Are women targeted on the theory they'll identify with undercompensated housekeepers?

Are they targeted to counterbalance the effect of recent news re unequal compensation received by women in City of Seattle government employ?

And why emphasize the all-immigrant status and countries of origin of the five individual signatories?

9
@6 Yes, yes, all men are misogynist animal murderers. Clearly I could give less than a shit about my wife or daughter. Don't you have some vegan trolling to do next?
pragmatic on July 30, 2013 at 1:49 PM · Report this
10
I received one of these letters last week. I usually throw out any political junk mail without even reading it -- it just goes right in the recycling bin. But this did not overtly look like a political ad, so (1) they got me to read it. (2) It's short and sweet. (3) It's written by real people, which also catches my eye. (At least, I hope they're real and this isn't all made up.)

Anyway, the ad had its desired effect on me (although I was leaning toward McGinn anyway, since Murray's been acting like a weasel during the campaign.) 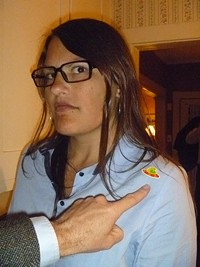 15
@13, I wonder if the cloth thingie was meant as flair for recipients following the suggestion to hang it in their workplace?
TomJohnsonJr on July 30, 2013 at 2:04 PM · Report this

21
@18 Um, perhaps that's because so many of these housekeepers are recent immigrants, who haven't yet qualified for citizenship. Hmm.

I once hopped a ride on a Local 8 chartered bus to a protest in Olympia. These housekeepers are mostly minority, predominantly immigrant, and almost entirely female. They work long hours for little pay. At one point we took turns introducing ourselves, and one of the questions was, "What are you doing this weekend?" I may have been the only person on the bus who didn't answer: "Working."

22
That's funny, the same 5 women wrote to my grandmother. Their poor hands slaving away to sign 38,000 of those for McGinn.

Another site said they were made in Sacramento... as in "you can't have our NBA team McGinn/Hansen" land.

26
Hrm, if only there were a certain office that was informed of who is registered to vote, what their signatures looked like, and maybe was informed by candidates where money and other in kind contributions were going during elections..... I bet that office would love to respond to the voting public about if mailings are legit or just truth-y.
ChefJoe on July 30, 2013 at 3:08 PM · Report this
27
Goldy @ 21 -- That's all very true ... but it's also very true that political acts (like endorsements) of citizens and electors in the affected jurisdiction generally carry more weight with the voting public.

Is there a need to speculate further?
kitschnsync on July 30, 2013 at 3:43 PM · Report this
29
The mailer also contained a fabric "gift" - a piece of canvas printed with a message saying something to the effect that hotel rooms are cleaned for the visitors of the world by women from around the world. The fabric did not mention McGinn. Overall, I found the whole thing odd and did not like how it implied the the five signatories paid for the whole thing themselves

This speculation of whether they're voters and therefore whether they're legitimate is pretty dumb. They were clearly chosen due to their immigrant backgrounds (or at least that's what was intended to be communicated). Given how many US-born citizens aren't even registered to vote, I don't know why one would necessarily assume they should or must be registered voters, or even naturalized citizens.

Heck, I've even met a couple immigrants that are working residents of Seattle and aren't registered to vote but have volunteered or other shown their support for the McGinn campaign. I've met volunteer immigrants on other campaigns as well. There are a lot of people -- under 18, immigrant workers, etc -- who are more passionate about effecting change in this country than their well-to-do adult citizen counterparts.

But please, let's sift through voter rolls. There's something to prove here, I just know it!
grkle on July 30, 2013 at 4:12 PM · Report this
32
@28, it'll be interesting to see if McShithead survives the primary. If he does, Murray is going to crush him. Which won't be all that much of a victory, given that Murray is just as stupid and corrupt at McShithead. But at least the word will go out that there's only so far someone even in this city can go to suck up to the bicycle nazis and the developers.
Noicons on July 30, 2013 at 4:19 PM · Report this
33
Great! Let's have a New York union (hmm, where's McShithead from again?) sends a mailer quoting a bunch of people who probably aren't even from Seattle telling us who our mayor should be. Just imagine the squeals if, say, Wal-Mart or Whole Foods had sent a pro-Steinbrueck mailer signed by a bunch of their workers.
Noicons on July 30, 2013 at 4:31 PM · Report this
34
@33/NotFans/whoever you are this week, the hotels didn't send this out; the union did. So your analogy to Wal-Mart or Whole Foods is stupid.
sarah70 on July 30, 2013 at 11:59 PM · Report this

35
Higher wages, paid sick leave, and getting more respect is due to McGinn ? I'd think "union negotiation, city council voted 8-1 and McGinn just signed it into law, and maybe McGinn should make kitten videos be cuter while he influences how people treat hotel staff on a city-wide basis."
ChefJoe on July 31, 2013 at 7:27 AM · Report this
36
sarah70, you stupid bitch, read my posting. It didn't say that that hotels sent it out.
Noicons on July 31, 2013 at 9:03 AM · Report this
37
No one ever told Zimmerman "don't follow him." You people are just ridiculous. Why don't you just come out and say what you're thinking, which is that in your mind it's okay if any black person beats the living shit out of any white person, and that when it happens the white person isn't supposed to fight back?

Which, by the way, will not be accepted by white people. They will do what Zimmerman did, and fight back. Trayvon Martin is dead, and he deserved it. Tell you thug buddies that if they try to pull the same stunt, they will be dead too, and whoever shoots them will be acquitted.
Noicons on July 31, 2013 at 9:19 AM · Report this
38
Sheesh, wrong thread, but what the hell, let's talk about Trayvon Martin here too. He had it coming, wouldn't everyone agree?
Noicons on July 31, 2013 at 9:21 AM · Report this