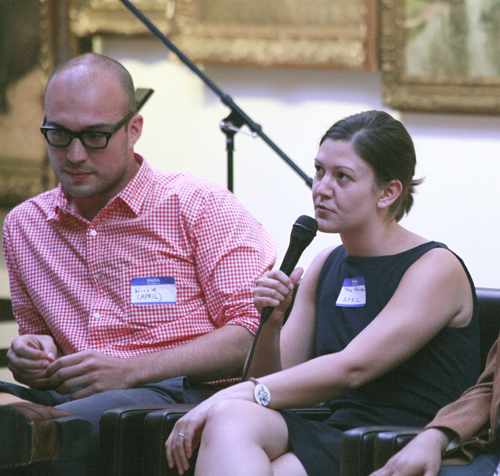 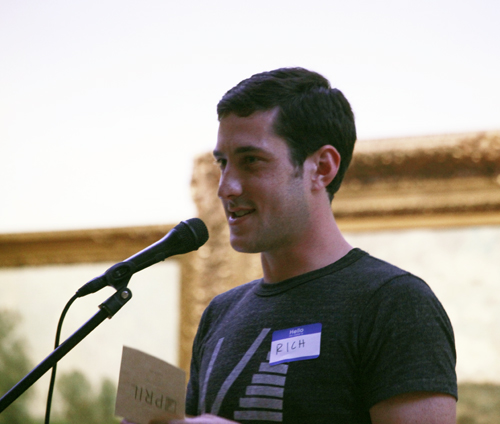 The Frye was packed with artists last night—and not just artists, but the craziest, loneliest artists of all: writers! We were in the gallery this time, rather than the auditorium, so some audience members were sitting in chairs (including Rebecca Brown and Ellen Forney) and some were on a bench along the back wall (John Olson, Matt Briggs, Lesley Hazleton), and some were sitting on the ground (Stacey Levine, Lori Goldston, Jen Zeyl, tons of Stranger writers). The only downside to being in the gallery was we couldn't bring our Smirnoff in—so there was a lot of chugging at the end of the cocktail hour. Also, Smirnoff got a special shout-out last night for not being Russian. Dump all your Russian vodka and drink Smirnoff from now on. The sponsor of the literature award itself this year is Amazon, which also got a shout-out and a round of applause.

Maged Zaher, a poet who divides his time between Seattle and Cairo, went first. Stranger books editor Paul Constant introduced him as "the best kind of correspondent, because he makes everything feel domestic and foreign at the exact same time." Zaher read new poems about desire, mental health professionals, internet dating, and uselessness. At one point he read, "I like your hair first. Your nipples second. This is banking." He read a poem by someone he called a "blue-collar Egyptian punk version of Sylvia Plath." He read an excerpt from a new nonfiction prose piece he's working on for The Stranger, about sitting outside Uwajimaya with a friend of his, an Egyptian feminist and political-science scholar, sharing a large bottle of sake and talking in Arabic together, "a minor simulacrum of hanging out in Cairo streets." He continued: "Under the effect of sake, we sat discussing life between different worlds: between Cairo and Seattle, and between a racist American right-wing that views Islam as equivalent to terrorism, and a hip Academic breed of liberal and leftist Middle East scholars who built their careers on promoting moderate political Islam as democratic without really knowing that it isn't." Hours later, at the Vito's after party, I asked him about his excellent necktie, and he said it was by Liberty of London, "a very important bourgeois brand" that has since been bought by Target.

Neal Stephenson went next, and rather than reading from any of his novels, or talking a bunch about himself, he instead chose to read his introduction to David Foster Wallace's book on infinity, filled with Stephenson's ideas about where DFW's voice came from and various ways it's been misinterpreted. (Stephenson and Wallace are from the same Midwestern American college town in Illinois.) "Cleverness or verbal pyrotechnics or archness is not the emotional tone that comes through to me, but a kind of open-soulness and desire to connect that were touching before, and heartbreaking after, David Foster Wallace succumbed, at the age of 46, to a cruel and incurable disease." During the Q&A, Constant asked why it was that so many people didn't know Stephenson lives in Seattle, and Stephenson said it made no sense because Seattle is everywhere in his work: "It may just be you're talking to people who haven't read anything I've written." Later, at Vito's, Stephenson talked about his doubts that writer's block exists (if you have writer's block, you just haven't done enough research, he said); the ways that writing a book is like building a cabinet (I forget the particulars); Wallace's mind-rewiringly wonderful essay "E Unibus Pluram" and how you can't watch TV the same way again after reading it; about wanting to rewrite Moby Dick as a science-fiction novel (yes! please!); and about the vest he was wearing, which I thought might be a "fishing vest." After all, it's green and sporty and lightweight. He said, "It's not a fishing vest. It's just a vest to put your shit in. It's a pocket system." He said he bought it at an REI in Las Vegas.

Then the inventors and curators of the APRIL Festival talked about what they do—the ways they're trying to reorient literary culture, fuck with conventions, bring readings to weird venues, stage competitive storytelling events with novelists and playwrights and drag queens, and just generally help independent writers and publishers get more attention. Tara Atkinson showed a diorama that hilariously did not help much at all in the way of explaining APRIL… 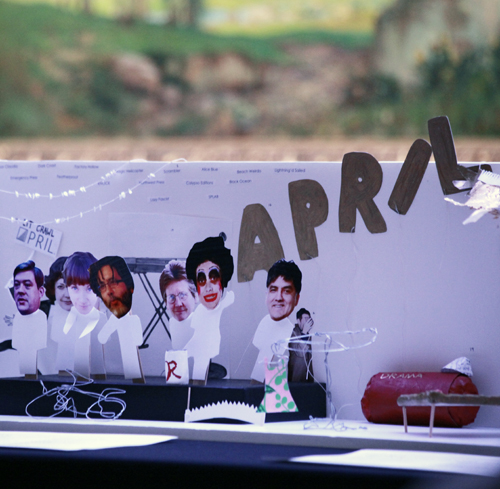 ...but it was, again, hilarious. "This is sort of what it would look like if you went to every APRIL event at the same time," she deadpanned. Stephenson gushed about what APRIL's doing. He pointed out that when he watches the Oscars he's "envious at how good that industry is at promoting itself. Writers have nothing like that except readings. Which is sad. Congratulations on creating something new in terms of parading literature out in front of people." Willie Fitzgerald explained that when APRIL is raising money, they do something called Reverse Fan Mail, where well-known writers send fan letters to randomly assigned donors—so donors who give get original, personalized pieces of writing from great writers. And then he explained that APRIL had commissioned poet Rich Smith to write a Reverse Fan Mail for the Frye Art Musem. Specifically, Smith was inspired by a row of paintings on the Frye's wall hung so that they all share a horizon line, even though they're all paintings of different things. APRIL cohorts Kellen Braddock and Frances Dinger passed out copies of Smith's poem to everyone in the crowd, to follow along. This post is already getting long, but fuck it—it was so gorgeous you gotta see the whole thing. 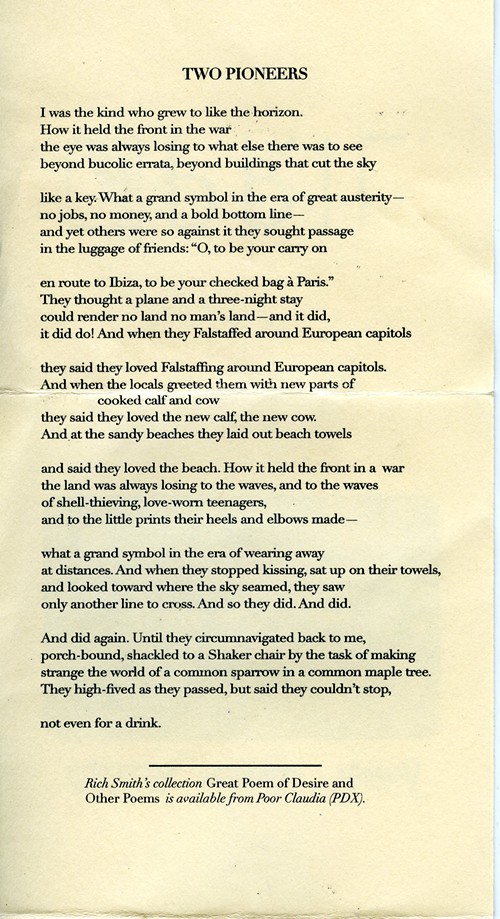 Since I'd asked Zaher and Stephenson annoying sartorial questions, I asked Atkinson about her simple black dress, and she said, "I got this at Value Village. My husband got it for me in case I get a job interview. I'm looking for a job right now." You hear that, world? Tara Atkinson is looking for a job. Somebody hire her, stat. She's a genius.