Why Do Trees Change Color So Inconsistently? 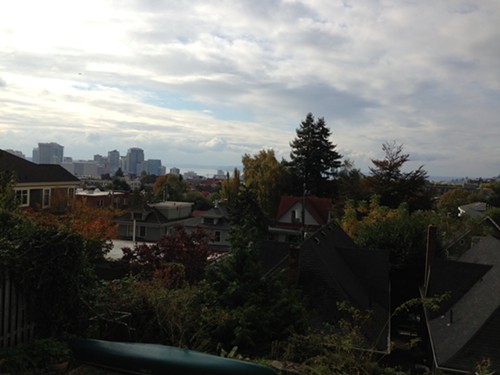 It's chilly in Seattle today and the leaves are getting down to the business of senescence and death. But their changing of the color-guard always seems strangely inconsistent. Even from my back window, I can see some turning yellow from the top, some from the middle, some from the north side, some from the south side. Why? How do trees "choose" where their leaves will begin changing?

A quick roam around the internet didn't tell me much. The federal government is too broke to explain and some joker at the University of Illinois only says: "Fall color change can initiate anywhere on the tree: top, bottom, south-facing, west-facing, north-facing, or east-facing." (Thanks, but I got that part already.)

I don't know any botanists, so I asked my new brother-in-law, who is the next best thing: a rocket scientist. He pointed me to some other joker at the University of Illinois who has a more satisfying answer:

What triggers these fall changes if not Jack Frost? A specific combination of shortening day length and cooling temperatures in autumn at a given locale is typically “sensed” by plant receptors resulting in the production of plant hormones that initiate leaf senescence. The initiation and timing of the various processes of leaf senescence are genetically controlled for tree populations of a rather narrow climatic zone. How narrow is it? Seedlings originating from a local population in Illinois are usually planted within northern, central and southern seed zones each about 130 miles from south to north. This precise genetic programming, evolving through the impetus of natural selection, allows leaves to escape autumn frost damage in a specific climatic region during senescence. In the western mountains, it is possible to observe the wave of aspen coloration beginning at higher mountain elevations and progressing downwards to milder climates at lower altitudes.

Attempting to apply my aerospace science where it may or may not belong, I'd hazard a guess that local (and by local I mean, this house as compared to the one down the street) environmental conditions, such as wind patterns, humidity, shade from another larger tree, would all factor into the temperatures seen on the leaves themselves, causing a specific pattern of senescence. That's just a guess though.

In other words—if my rocket scientist basing guesses off some online essay by a professor of tree physiology is to be trusted—microclimates.

Sound good to me.