A Very Big Head Is Coming to the Olympic Sculpture Park 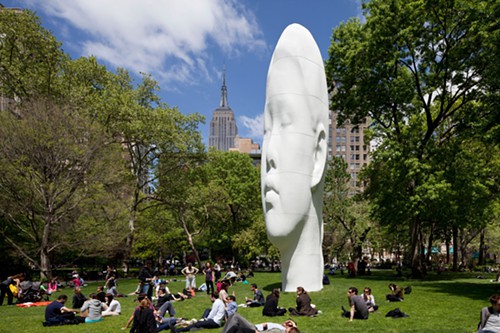 At a press conference this afternoon*, Seattle Art Museum announced a major new acquisition for the Olympic Sculpture Park. It's a gift from Barney A. Ebsworth, the Hunts Point collector/Build-a-Bear investor who's nearing 80 years old. It's called Echo, and according to media reports from its original iteration in Madison Square Park in New York, it's 44 feet tall, made of resin mixed with marble dust, and modeled on a photograph of a 9-year-old girl who's the daughter of the owner of a Chinese restaurant near the artist's studio in Barcelona.

The artist is the Spaniard Jaume Plensa. Over the last decade, since his video towers were installed next to the Bean in Millennium Park in Chicago, he's become a commonly commissioned public artist. He makes figurative works that he refers to as dreamy and poetic.

Echo has her eyes closed. She is physically pixilated, made of blocks of material manufactured based on specifications taken from a computer modeling program applied to her photograph.

From the press release:

The sculpture references Echo, the mountain nymph from Greek mythology. As told in Ovid’s Metamorphoses, Echo offended the goddess Hera by keeping her engaged in conversation, and preventing her from spying on one of Zeus’s amours. To punish Echo, Hera deprived the nymph of speech, except for the ability to repeat the last words of another. Plensa created this monumental head of Echo, listening with her eyes closed or in a state of meditation. The artist envisions Echo to look out over Puget Sound in the direction of Mount Olympus.

I hope I'll understand the popularity of sculptures like this one when I see Echo out there on the waterfront next year. There was a giant pixilated bronze Plensa head at the Venice Biennale this summer, and it struck me as dour, serious, and dumb—straitlaced and emptyheaded. We'll see what the sparkly white (presumably Asian) girl looks like when she arrives.

There was one other oversized figurative sculpture in Venice this summer: Marc Quinn's Allison Lapper Pregnant, a giant, naked, pregnant woman without arms and with truncated legs—the way she was born. This Venice version was slightly purplish and inflatable, deflated every night and inflated every morning. She was made after the stone version first put up in Trafalgar Square in 2005, when she generated all manner of protests and complaints and headlines. (She still does: the Catholic Church pronounced itself confounded by her appearance in Venice this summer.)

At first, I was resistant to her high-profile ease. But over several days of riding past her on the water, back and forth while she just stayed there quietly watching, she won me over. I can't say exactly how. Maybe it was partly that the thousands of smaller artworks I saw left me so fatigued that I craved her concentrated simplicity. Or maybe, in the end, she was an example of that old mistake we make when we confuse the art for the subject.

Because the truth was that I just wanted to support Allison Lapper's right to hold forth, big and pregnant and naked and with a starkly unidealized body, out in front of a great big old church. Marc Quinn made it still feel like there was something of Allison Lapper present even in this estranged version of her. I'm not so sure what remains in the classicized Echo of the specific 9-year-old girl whose image Plensa used. We don't even know her name.

*I couldn't go, because I'm so sick I've slept two 17-hour nights this week. Please accept my apologies if you've been wondering why I'm not covering something great that you're doing.