Bertha, Seattle's deep-bore tunnel digger, isn't the only mammoth, controversial piece of equipment that's stuck in the Northwest these days.

This afternoon, about a dozen climate-change activists from Rising Tide Seattle showed up at the Bellevue offices of RCCI, a subsidiary of General Electric, to protest the shipment of a "megaload" evaporator that is currently bogged down in Eastern Oregon, trying to make its way to the tar sands oilfields in Alberta, Canada.

Activists and members of the Umatilla and Warm Springs tribes have been blockading the megaload shipment for weeks, which can only travel at night because its size disrupts traffic. "This thing is forty stories tall," said activist Kyle Miskell on his way to the office occupation this afternoon. "It's like they're shipping a skyscraper—and it's going through reservation areas against their wishes."

"The Alberta tar sands are the most environmentally destructive projects on the planet right now," he added. "As long as companies like RCCI are helping to develop the tar sands, they can expect resistance."

This evaporator is one of three that was scheduled to leave the Port of Umatilla in late November, but has faced a series of blockades including people locking themselves to the rig and one Umatilla woman, a 60 year-old grandmother, lying down in the road. (She was arrested and charged with disorderly conduct.) Adam Gaya of Rising Tide Seattle says that, due to the delays and some weather issues, the megaload has only moved 100 miles since late November, setting the timeline for shipping the evaporators back several weeks.

"People are digging in their heels about this because both GE and Omega-Morgan are looking for a permanent route to ship equipment to the tar sands fields, and roads where they can make modifications," Gaya said. "This is a test run for them and folks feel like if we can prevent or significantly delay these loads from arriving in Alberta, we might be able to shut off one of their last available routes."

Earlier this year, 28 members of the Nez Perce—including eight members of the tribal council—were arrested in Idaho for a similar blockade. The Nez Perce, working with environmental lawyers, secured a court injunction against shipping the evaporator through tribal lands until a full impact study, including effects on tribal culture, could be completed.

So General Electric and its shipping contractor Omega-Morgan have set their sights on this new route, which activists are currently trying to obstruct.

While Rising Tide held its brief protest today in Bellevue—Miskell said this was intended to be a "high profile/low risk" action and nobody planned to get arrested—Rising Tide also protested at an office in Portland.

Rising Tide is the same group that found itself the target of lurking FBI agents and informants this summer. Agents dropped by people's homes and places where they volunteer and work, and activists endured the squirrelly company of confidential informant Robert Childs who has previously been convicted of child molestation, rape (twice), and failure to register as a sex offender.

A full post about Childs and his history of trying to infiltrate anarchist and environmentalist groups, including family-oriented picnics—and US Attorney Jenny Durkan's justification for using a quadruple-convicted sex offender because "it’s not the saints who can bring us the sinners"—is over here.

This afternoon, Miskell told me another story about Childs—shortly before he was outed as an FBI informant, he had been badgering a Rising Tide activist in front of a public library about making bombs. "He said, 'are you interested in learning how to make bombs?'" Miskell said. "She said no. 'You have some chemistry background—are you sure you wouldn't be interested in making bombs?' She said no, he kept going on, and she told him he was harassing her and to leave her alone." The last they'd heard, he was living in a modified school bus in Florida, moving it every few days so he wouldn't have to register as a sex offender.

"The main thing we want to get across to these people today," Gaya said of the action in Bellevue, "is that every route they have tried has faced resistance," Gaya said. "They cannot find a permanent route—so they'd better give up!"

The activists say people are gearing up for further blockades in Oregon and Idaho. "The situation on the ground is changing very quickly," Gaya said. "There will be more to come."

A statement and photo from today's protest in Bellevue: 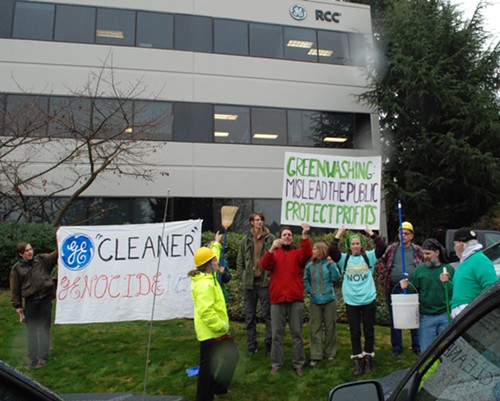 We are residents of Seattle, Olympia, and many others from the rest of the state who reject RCCI's green-washing statements that your evaporator mega-load equipment will make the tar sands more efficient. Any such increases in efficiency will be nominal in light of the massive ecological destruction, harm to human life, and increases in climate change, caused by the tar sands.

We stand in opposition to your choice to contract shipment of mega-load equipment, while continuously ignoring the rights of tribal nations. Both the Nez Perce and The Confederated Tribes of Warm Springs have stated your shipments will cause irreparable harm to their rights and religious cultural sites and practices. Despite this you ignored Forest Service plans for environmental impact studies prior to shipment and their work with the Nez Perce tribe and contracted shipment through Omega Morgan anyways. You then entered into a court battle to remove the injunction on shipping. When GE decided to look for a different route, you did the same thing all over again, this time ignoring the treaty-reserved rights of The Confederated Tribes of Warm Springs. You are responsible for continued genocide of native peoples and we will allow it to continue!

Your statements that your equipment will make the Alberta tar sands more efficient are also ludicrous. The tar sands projects are the single most environmentally destructive projects on the face of earth. Your evaporator equipment will not slow the massive loss of bio-diversity from clear-cutting of the Boreal forests. The enormous tailing ponds generated from processing, even with re-used water, will still have catastrophic impact on local aquifers. The tar sands will still be the fastest growing heat-trapping greenhouse gas in Canada. Cancer causing Volatile Organic Compounds resulting from tar sands production will still be poisoning native peoples and killing residents in surrounding areas.

We demand that you withdraw your contract for Omega Morgan's transport of tar sands equipment and halt design of further equipment. Exploiting tar sands will never be efficient and tar sands extraction and processing must be stopped. We will ensure that these projects will be shut down, by any means necessary. Resistance is growing, and will continue to grow.