Holy Shit, You Guys! The Hobbit Is Incredible! 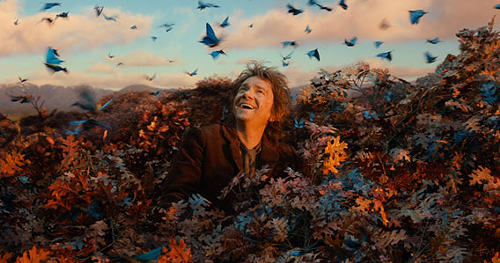 GUYS! Guys! Why didn't you tell me about this? They made a movie out of my book? Have you heard about this? Talk about crazy, right? I mean, one minute I'm dicking around in my office at Oxford-making up Elvish, for fuck's sake-and the next minute I'm in a movie theater, wearing 3-D glasses, about to watch a Hobbit movie?!?! What!! I guess it's true what people say: Sometimes, life really can surprise you.

I know some authors can be a little particular about movies based on their work (looking in your direction, SUZANNE NEVER-SHUTS-HER-GODDAMN-MOUTH COLLINS), but if you ask me, everything about The Hobbit: The Desolation of Smaug is 100 percent straight-up baller. To be honest, now that I've seen it, I'm a little embarrassed by my book! All I ever wanted to do was write a fairy story for children who had Asperger's. I guess I did a pretty okay job! Ha! But after seeing what Peter Jackson did to my book, it's just… man. Not even close. Dude nailed it!! And there's so much stuff I don't remember writing! Like that part when Gandalf went to a haunted house, or that part when the dwarves set up a Mouse Trap-style trap for that dragon, or that part when Legolas pulled out his bow and arrow and was all FWOOSH! FWOOSH! FWOOSH! and shot like a billion orcs! TWAANNGG! RIGHT IN THE KISSER! Seriously, though, real talk: I don't even remember putting Legolas in the book. I should probably reread that thing one of these days. The new James Patterson is a hoot (sue me!), but maybe once I finish that. Apparently Bilbo, Fili, Kili, Dwalin, Sleepy, Bashful, Dopey, the fat one, Sneezy, Happy, Grumpy, Dennis, and Thorin the King Under the Mountain got into way more shit than I remember.

That's probably how Peter Jackson made this movie so long, now that I think about it! Back when I was writing The Hobbit, I kept things pretty simple. ("Maybe a story about some hairy midgets?" I recall scribbling in a margin late one night as I toiled on A Middle English Vocabulary at the University of Leeds. "Perhaps they are sad because they are small.") So I never even thought of putting in the smoke monster from Lost, or that hobo who lets birds live in his hat, or those pugs. Ahhh! Those pugs!...