The Stranger's Day in Court 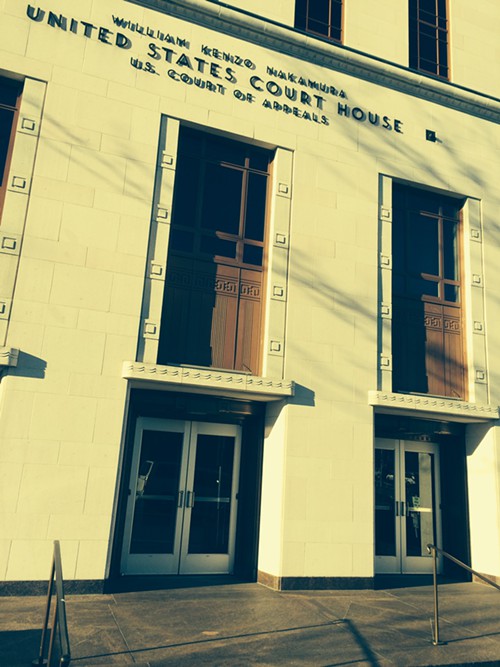 This morning, as Seahawks fans swarmed into downtown Seattle for their Super Bowl promenade, I walked through the doors of the Ninth Circuit courthouse—the same doors that had been smashed during May Day demonstrations in 2012. The federal government reacted to the vandalism with vigor, including early-morning raids, secret grand jury interrogations of local activists (who were not even suspected of being at the scene of the crime), and a legal fight between The Stranger and the US Attorney's office about whether it has a duty to be transparent about the courtroom fallout.

For a fuller refresher course about the big-picture issues, please see this post on Slog yesterday. 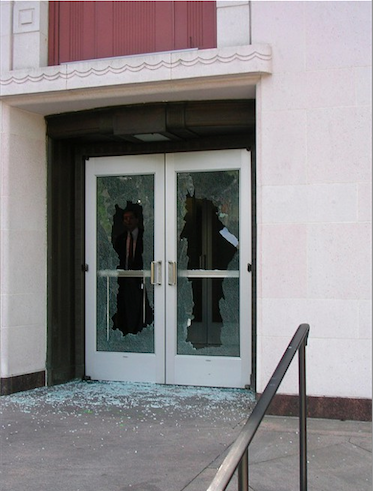 What happens in front of a grand jury is secret. That is undisputed. (Someone who has been served a subpoena to appear before a grand jury has a First Amendment right to talk about her experience, but everyone else involved is legally bound to secrecy.) If someone refuses to testify before a grand jury—like Matthew Duran and Katherine Olejnik did—contempt proceedings begin and they can be sent to prison for an indefinite period of time. (As Duran and Olejnik were, for five months, two of those months in solitary.)

The issue today, brought before judges Gould, Fisher, and Christen, was whether the legal proceedings outside the "core of secrecy" of the grand jury—ancillary hearings, dockets, and motions, for example—should be available for review by the general public or future historians. (Fun fact about Judge Christen: She was appointed to the Alaska Supreme Court by Sarah Palin in 2009, which got the Republicans in a froth because she had been a board member of Planned Parenthood.)

We maintain that while some things are defined as secret—closed hearings, grand juries, sensitive information that should be redacted for serious reasons—we have a right of access to the rest. We should be able to follow what's happening in our courts.

The US Attorney's office denies this, essentially arguing, "if it's in any way related to a grand jury, no matter how tangential, and even if it's an open hearing, we can seal whatever we want and the burden is on you, the public—and the hundreds or thousands of dollars you want to spend fighting us in court—to prove that we should unseal them. Rule 6(e)6." (We'll get to 6(e)6 in a minute.)

I'm no legal expert, but the fight seems to boil down to this: We want to put a thumb on the scales for transparency within reasonable limits (redact the stuff that's actually sensitive); they want blanket opacity.

Currently, if you go to PACER, the place where the public can look up federal court proceedings, there's no real record of Duran or Olejnik—no trace that they got called before a grand jury or what happened to them afterwards. (There is a record of Duran insofar as he appears in our case against the federal government, but if it weren't for that, there wouldn't be much.)

The federal government even fought our request to unseal the docket, essentially the table of contents to show that court proceedings ever happened in the first place (which contains no sensitive information) and transcripts of court hearings that were open to the public. If you happened to be in the courtroom on the day of Matthew Duran's contempt hearing, for example, you could've sat and listened to what happened, and even taken notes to publish. If you weren't there that day and wonder what happened, the federal government says, too bad, so sad.

In the oral arguments today—during which we could occasionally hear the roar of Seahawks fans—attorney Neil Fox (looking professorial in a liberal-arts college way with grey hair, spectacles, and a tiny gold earring) argued that The Stranger, and future researchers, have a First Amendment right to non-sensitive documents such as dockets and transcripts of open hearings.

"If you can attend the court proceedings," he summarized later this afternoon, "you should be able to read the documents to understand what's going on—the right of access is not just to attend but to understand. You can't completely close everything. Once it's been opened, there has to be a way to track it." The judiciary is ostensibly there to represent our interests and uphold the law—unless there's a compelling reason to keep things secret, why not let us follow the action?

Kim Gordon, Matthew Duran's restrained but clearly impassioned attorney, talked with the judges about what kinds of documents should be available to the public. Her client, she said, "has feared more what the government will to do him behind closed doors than any harm he will suffer from the public knowing what he has been through."

The judges were a bracing and tough trio who asked piercing questions that left little room for equivocation (and left every attorney I saw that day—there were cases heard before ours—stammering at least a couple of times).

Michael S. Morgan, a handsome, shaved-headed man with a little scruff of facial hair who represented the US Attorney's office, built his argument by repeatedly invoking rule 6(e)6 in the Federal Rule of Criminal Procedure. This, in his opinion, was all anyone needed to think about:

Sealed Records. Records, orders, and subpoenas relating to grand-jury proceedings must be kept under seal to the extent and as long as necessary to prevent the unauthorized disclosure of a matter occurring before a grand jury.

What counts as "a matter occurring before a grand jury"? Everything, it seems. Even things—such as motions in contempt proceedings citing legal precedent—that the grand jury presumably neither knew nor cared about.

"No exception to grand jury secrecy was met by any of these documents," he said, referring to what we'd asked to be unsealed, and everything falls under rule 6(e)6. This was an argument of form over content—we have a rule that could be interpreted to mean total opacity for the federal government (while it happens to be conducting investigations into the private and political lives of non-suspects of crimes), so let's draw the curtain around us, nobody gets a peek, and we don't have to explain why. (Also known as the law of inverse transparency.)

"Even the docket?" Judge Christen asked pointedly. The idea that the federal government would interpret a docket as "a matter occurring before a grand jury" seemed to both amuse and irritate her. Morgan said the seal of the docket was "problematic," but "meets the definition under 6(e)6."

What about an order from Judge Richard A. Jones that unsealed part of one of the contempt hearings (one of the only concessions The Stranger has won in this battle so far). The government, Morgan said, would have no objection to releasing that little blip of information.

But where, the judge asked, trying to parse his Kafka-bureaucracy logic, would it go if the government objects to a publicly accessible file about the Duran case on PACER? If this blip of information were to be released, how would the public even be able to find it?

That, Morgan allowed, was "a slight dilemma."

And on it went. Morgan said that just because Judge Jones had opened a tiny sliver of a contempt proceeding to the public (and us), it didn't mean that the public should have access to anything else, because 6(e)6.

What about the proposition, one judge asked, that when the courtroom door is unlocked and it's a public hearing, the transcripts should also be open?

Would making that information public jeopardize the grand jury investigation in any way?

Neil Fox got up for a minute and a half of rebuttal, saying that there "is a First Amendment right of access to open proceedings" if those proceedings have been declared public. And then our time was up and the court moved on to other matters. The next arguments were between the League of Wilderness Defenders and a U.S. Forest Service official named Kent Connaughton, who has been advocating thinning/logging programs in the Blue Mountains of Oregon.

We probably won't hear the Ninth Circuit's ruling on this case for a few more months.

Slog AM: COVID Wave Hits India, the Fires Are Back Already, and Today Is the Best Day to Get High on Weed