Another Dispatch from Kiev 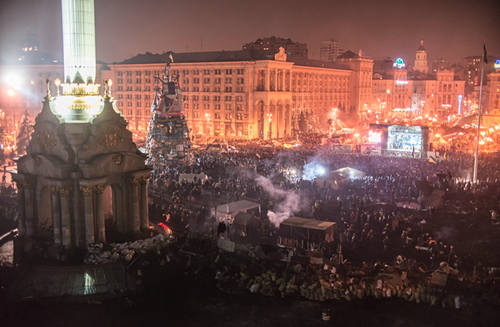 Chris Collison, a former Stranger chow intern, currently assistant editor for JN1 TV in Ukraine, has sent a dispatch and some photos from Kiev, as well as this footage, set to a demonstrator playing the Beatles' "Yesterday" on the Maidan public piano while Kiev burned.

"Things here are extremely tense at the moment," Our Man in Ukraine writes. "The violence on Maidan has ended for now. Protesters have reoccupied the entire main square. Today they held a huge funeral for the protesters who were killed earlier in the week." 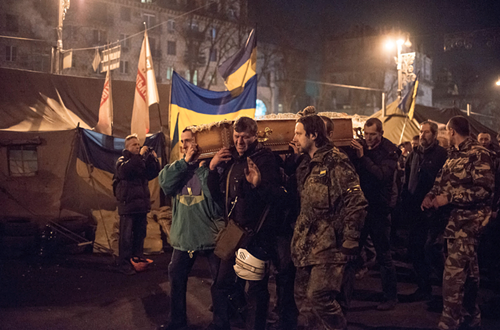 The opposition signed a deal with the president that calls for early elections and a return to the 2004 constitution. But people aren't happy. It's not enough. They blame President Viktor Yanukovych for the bloodshed and won't stop until he is gone. Even one of the three main opposition members, Vitaliy Klistchko, expressed regret for meeting with him and signing the deal. Nobody trusts the opposition, either.

Lots of funny business is still going on throughout the city. I'm at the office right now, and there was a fight outside the building about an hour ago between Maidan demonstrators and guys with baseball bats. Protesters have taken to roaming the streets looking for pro-government thugs, known as titushki, who are paid by the ruling party to intimidate people and beat up Maidan supporters. My colleague was attacked and only narrowly escaped from a group of them yesterday when he was trying to take photos. 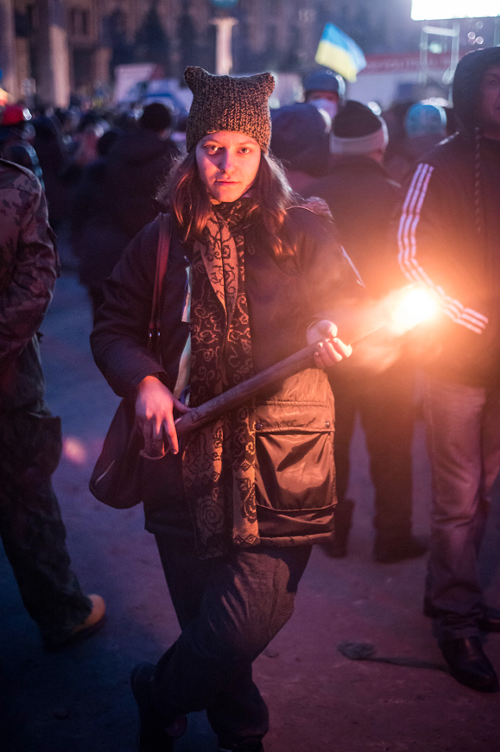 The city was virtually on lockdown earlier this week, with transportation closed and police stopping and searching people and cars all over the place. But today there wasn't a single cop on the streets.

The regime isn't ready to give up yet, but Yanukovych's base of support is crumbling quickly. A group of his political allies got on planes and fled the country yesterday. MPs from his party are beginning to defect, and the oligarchs who prop him up and control most of the media here are beginning to distance themselves from him.

It's hard to say what will happen next. The situation is fluid and things are changing very quickly. Every time it seems like things are starting to defuse and calm down, something happens and it all flares up again. This is really the worst crisis Europe has seen since at least the 1990s. Ukrainians pride themselves as a peaceful people, and to see this happen is extremely shocking, to say the least. 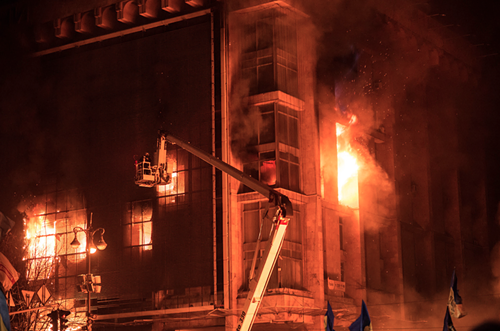 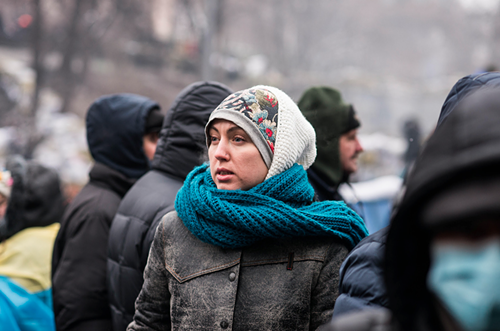 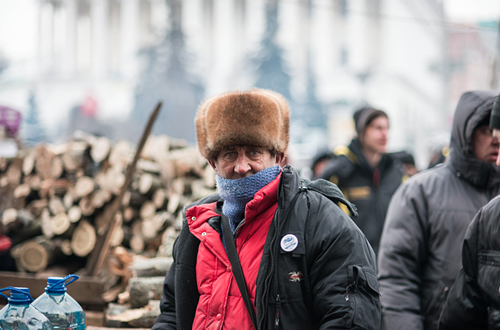 People are worried that Russia might try to do something once the Olympics are over, but it may be too late. There were rumors that Yanukovych would deploy the army, but it doesn't look like he has support from the military leaders. He sacked the head of the armed forces the other day, and I've read reports that most soldiers wouldn't obey orders anyway. Ukraine has a conscription army, so a bunch of 18-year-olds shooting their friends and classmates on the streets doesn't seem particularly likely. We hope so, anyway. 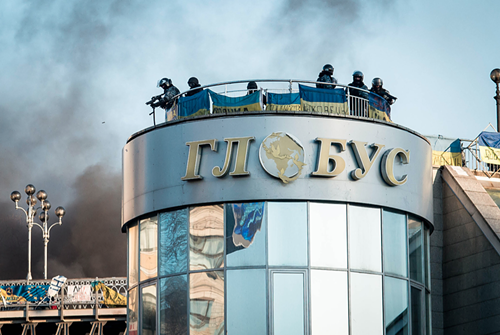 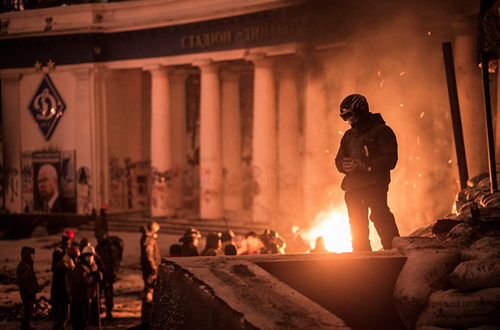 I asked him what the best outcome would be in the current crisis. "That's a tough question," he said. "One of the biggest problems facing Ukraine—and one of the main reasons many people took to the streets in the first place—is the rampant corruption in the financial sector, the government, and especially the police force. Ukraine, in the heart of Europe, ranks as one of the most corrupt countries in the world. It's one of the biggest frustrations of living here. There needs to be some serious corruption-busting measures once a new government takes over."

A lot of this stems from the police, which are widely reviled for doing little more than walking around and looking for people they can shake down for bribe money rather than fighting actual crime. Then there is the Berkut, the elite police force charged with combating organized crime and crowd control. They are the ones who have been out fighting the protesters and are responsible for much of the violence. Berkut are under the control of the Ministry of the Interior, which operates under the direction of the president. At this point, people basically view them as killing machines.

This echoes the dispatch from the anarchist/far-left demonstrators about "death divisions" stalking around that I posted earlier today.

Major reforms need to happen before anyone will have any trust in law enforcement again. Police in Georgia used to be just as bad, but the government a few years ago fired the entire police force and started over. Since then corruption has gone way down. Ukraine is a much bigger country, so that might not be possible, but something definitely has to be done.

The power of the president also has to be drastically reduced. Since assuming office in 2010, Yanukovich has made the office much, much stronger—kind of like how it is in Russia now. The country should return power to the parliament.

I don't want to speculate too much, but I would say that the most likely outcome is that the government will offer a few more concessions. They just announced that they planning to release jailed opposition leader Yulia Tymoshenko. Maybe Yanukovich will agree to step down and install a caretaker government until elections. Maybe he won't. Who knows. In any case, his political career is finished. And once the opposition gets into power, they are going to be under strict watch by the people who fought on Maidan. Everyone remember how badly the politicians screwed up after the 2004 Orange Revolution, and I'm sure they won't let these people repeat the same mistakes. The politicians will have a lot less room to mess around once they get into power since they won't have the same kind of mandate they did 10 years ago. Hopefully, that will be enough to start making real changes in the country. 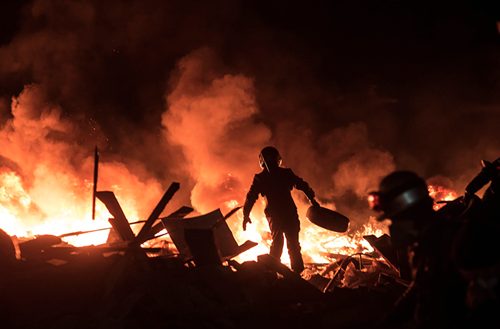 One thing that is making things difficult here is the east/west divide. The protesters by and large come from the western and central parts of the country, which is much more Europe-facing, especially the far west where almost everybody speaks Ukrainian. Things are quite a bit different in the east. It's very industrial, poorer, and a lot more Russian. People generally believe the Russian media more there and think of the protesters as a bunch of crazy extremists. They call them everything in the media—Nazis, fascists, terrorists, militant gay Europeans. I'm not even joking. Of course, not everyone in the east is crazy, but it's much less sympathetic to the Maidan protests. It's where Yanukovych was born. It's also where a lot of the titushki come from. The ruling party offers them money, ships them into Kyiv, and lets them loose on the streets to cause trouble.

My good friend Andriy, who I met at WWU, told me in 2010 when Yanukovych was first elected that he was a lot like an American George W. Bush. He can barely speak Ukrainian, he was always getting into dumb little media scandals, he was a big dumb rich kid with a history of criminal behavior, and was horribly corrupt. But imagine a George W. Bush who took everything to its logical extreme. A guy who gets into office for the expressed purpose of putting people out of business so he can make his rich oligarch friends richer, and then uses he guys he bought into office to pass laws increasing his power tremendously. It's not really the best analogy, but that conversation from 2010 really sticks out in my mind for some reason. 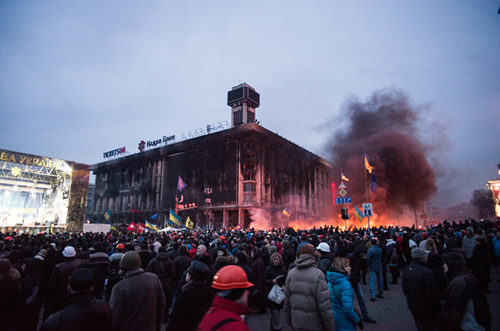 The one thing people should take away is that people are fighting because they are fed up—with corruption, political mismanagement, and especially this violence. Ukrainians want a government that respects their human rights and the rule of law. That is especially true of the younger generations. People my age don't remember the Soviet Union. They grew up listening to Nirvana and watching videos of cats on YouTube. They want to live in a modern, democratic nation where they don't have to worry about thug police and a broken economy. This is a young and fragile country, and what is playing out on the streets right now will shape the future of Ukraine for many years. 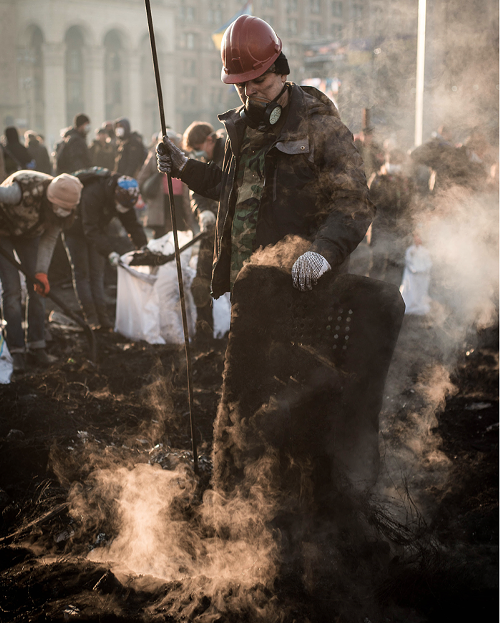 Thanks, Chris, and stay safe.