Dispatch from Kiev: "The Price for Victory Was Very High"

Chris Collison, a former Stranger intern who works as a photographer and an assistant editor for JN1 TV in Ukraine, has sent another dispatch from Kiev now that President Viktor Yanukovych has fled to the eastern part of the country and the opposition—which many are skeptical of—has begun asserting its authority. (You can read his previous report from the scene over here.)

In brief, Chris says that protesters look like they want to keep the square, that there is a feeling of sadness for what had been sacrificed and distrust towards the "victorious" opposition, and that reports about far-right elements among the dissidents has been overhyped, partially by Kremlin supporters who are trying to discredit the popular protest:

It's amazing how much can change in a day. President Viktor Yanukovych fled Kyiv for eastern Ukraine where he got on TV and accused the opposition of staging a coup. Meanwhile, protesters held a party at his palatial mansion a few miles outside the capital. That place has long been a source of anger for Ukrainians since he privatized the land and used public funds for its upkeep. While strolling around the grounds, protesters found a zoo, a golf range, a vintage car collection, and all kinds of documents Yanukovych and friends had dumped into the river as they fled. I'm sure demonstrators will discover all kinds of interesting bits of information once the pages dry out.

I was on Maidan most of the afternoon and evening on Friday. It felt very surreal since exactly three months had passed since the first protest I attended in November. The weather was the same—raining, a little bit chilly. But everything else had changed since then. Whatever innocence the demonstrations and this country had back then has been lost. Even though the movement seemed to have won, there was little celebration on Independence Square. A feeling of relief mixed with deep sadness hung in the air. Protesters held more funerals for those who were killed. The price for victory was very high.

Opposition leaders addressed the crowd. Some people cheered, others booed or tried to argue with them. Former Prime Minister Yulia Tymoshenko, who had been imprisoned since 2011, spoke from the stage just hours after being freed. Although she still has a lot of supporters, some people in the crowd, especially those who were there only for the funeral, weren't impressed to see her. A few young women behind me held signs reading, "We are happy for you, Yulia Vladimirovna. Now go to hell." 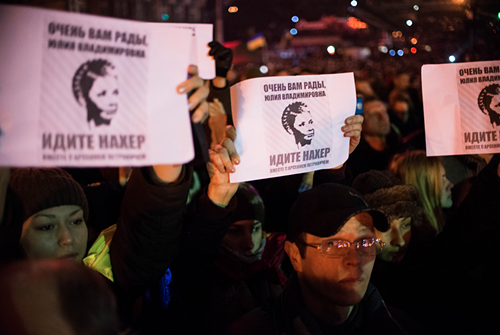 While the movement is generally pro-West, there has been a growing sense of resentment toward opposition leaders and politicians in Europe and the US. People feel let down by empty words, and there is a sense that the movement was on its own throughout the ordeal. The phrase "we are deeply concerned" has become a big joke among people here.

It's hard to say who is in charge now. Elections have been called for May, but protesters don't look like they are ready to give up the square. Maidan supporters wearing hockey gear and carrying bats have been directing traffic and patrolling the streets to keep order. They are much friendlier than the police. I stopped and talked to a couple of groups of them last night on my way home. They all signed my helmet and thanked me for being in Ukraine. One of them had an American flag in his pocket. 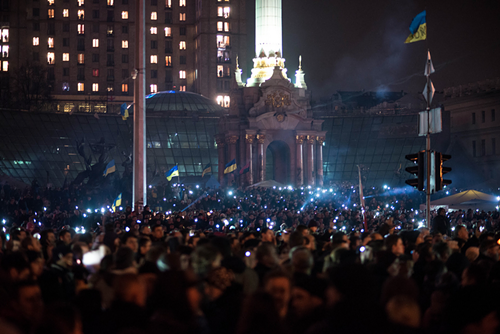 There has been a lot of fear about the rise of far-right groups during these protests. It's true that extremists came to Kyiv to fight, but their role shouldn't be over exaggerated. The movement has broad support—liberals, moderates, villagers, Russian speakers, far-right, far-left, foreigners. The pro-Kremlin press has tried to make it sound like Ukraine is a breeding ground for neo-Nazis and fascists, but that simply isn't the case. These groups by and large have less to do with anti-Semitism, racism, homophobia, etc. and more to do with fear of imperialism from Russia (political scientist Anton Shekhovtsov has written extensively about this).

People remember the atrocities carried out by Stalin against Ukrainians very vividly, and to some extent Ukrainians feel like they are fighting to maintain their independence. The other day, there were reports that Ukraine's chief rabbi had warned Jews to flee the country. But that was inaccurate. It was not the chief rabbi, but another Kremlin supporter. (See the correction in Haaretz.) Even my Jewish friends here think it's ridiculous.

The next coming months will be difficult. People are wary of the opposition, but if these protests have proved anything it is that Ukrainians are no longer going to let politicians get away with screwing them over. Hopefully the opposition realizes that they have a job to do and will carry through with their promises this time. The price was too high for them not to. 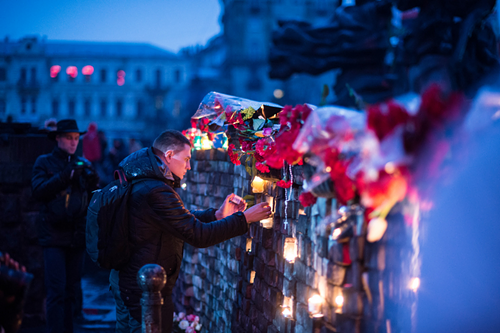