Alma Mater, or Not

The latest installment in the two-steps-forward, one-step-back progress towards marriage equality in the United States: The news recently broke that Loyola University Chicago would not allow same-sex weddings to take place in its (literally) iconic Madonna Della Strada chapel. I forwarded the news to Dan, who suggested I write something about it. So, if you’re interested in that sort of thing, follow me after the jump.

The family connections to this place are generational. My maternal grandfather, Ed Schneider, graduated from Loyola in the mid-1930’s after being trainer for the basketball team, and later he was a sports information director and very active alumnus. My mother swore, when growing up, that she would go to Loyola, despite the fact that it was then an all-male school, and she was a staff member there for nearly 20 years in the Psychology Department and the Tutoring Center. My father and my mother met at Loyola, before dropping out of college to get married and make babies. Family legend has it that my mother nearly miscarried my brother Ed while celebrating Loyola's 1963 NCAA men's basketball championship. I attended St. Ignatius College Prep, the high school that had once housed the University before its 1906 move to Rogers Park. I never even considered applying to another university, and anyway the fix was in: the director of admissions when I applied was the priest who had baptized me (though by that point he was a former priest, married to a former nun). I can state with 100% certainty that four generations of my family—Savages, Schneiders, and Hollahans—have attended mass at Madonna Della Strada. Five generations, if any of my siblings' kids have gone unbeknownst to me.

Madonna Della Strada is an art-deco masterpiece, designed and built during the Great Depression, opening in 1938, though its interior was not finished until much later. That interior is the other familial connection: my late cousin, Melville P. Steinfels, was an ecclesiastical artist whose work fills the space. He did the altar art in the apse, the stations of the cross, as well as the mosaics in the lobby and the side altars.

I haven’t set foot in a church (except as a tourist in Quebec City and Montreal) since my mother’s funeral at nearby St. Ignatius almost 6 years ago, but taking Dan’s suggestion, I dropped by yesterday, about half an hour before the daily 5:15 afternoon mass. Three people were there: a 20-something man and woman, maybe a couple. Maybe planning a wedding. And the organist, who was aloft playing music that some religious person would surely recognize, maybe an audition for the wedding music of the young couple. I was glad for the background noise, as it would cover the faintly sacrilegious sound of my camera.

I played believer (dipped a finger in the holy water, did the sign of the cross, lit a candle). Then I walked around and looked at the art my cousin had created. The altar piece was not my style, a sort of montage team picture of sainted Jesuits. The stations of the cross were great, though, a stylized ecclesiastical example of pre-Will Eisner “sequential art,” essentially a comic strip of Jesus’s last hours. 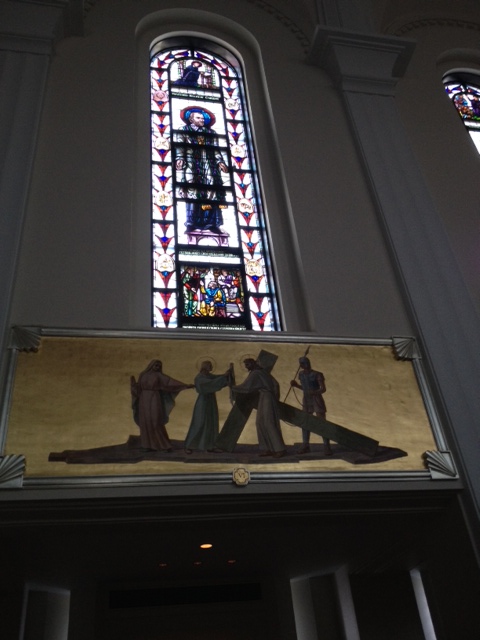 I tried to connect this image of love and mercy to the rejection of gays and lesbians by the Church. Couldn't do it.

The mosaic in the side altar devoted to Mary transported me back to childhood, if not belief. 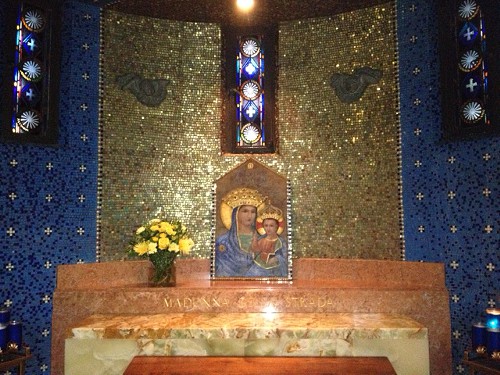 The picture doesn't do it justice. With the flickering candlelight, the mosaic tiles seemed warm as life, and the cross between Orthodox and Medieval styles in the portrait of Mary and Jesus blew me away: 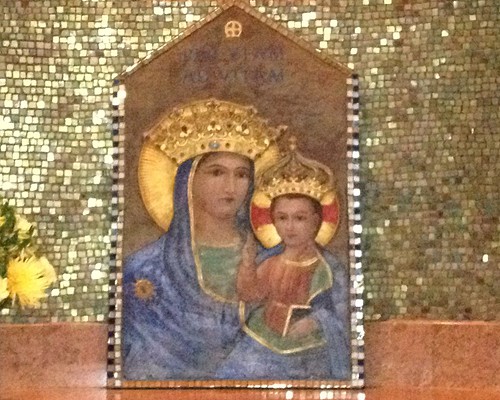 Why would any believer want to keep anyone away from this image of maternal love and transcendence?

The particular brand of formal and cultural Catholicism I was exposed to in both school and at home was of the inclusive variety. Liberation Theology was all the rage, and in high school and university I heard more teachers talk about death squads in El Salvador and the Polish Solidarity movement than I did about abortion or homosexuality. Catholic politics was progressive politics. Easter and Christmas dinners at my family home always included random heathens and pagans, and sometimes half a minyan, not to mention the atheists who were raised there.

So as I looked at the art on the walls of Madonna Della Strada, I still could not get my head around why would anyone want to keep people away from this beautiful place. I pondered the hope so many people seem to have for Pope Francis, a Jesuit, to put an end to the rigid and exclusionary actions of so much of the church and its unofficial allies. Well, they haven't gotten the memo at 6525 N. Sheridan Road yet. I wondered if Loyola bans the second marriages of divorced-but-not-annulled Catholics from this place, or if they were just anti-gay.

Then I re-read the news story and noted that the university continues to be happy to host wedding receptions of any variety on campus. Just not the ceremonies of any gays or lesbians or, presumably, Protestants or Jews or atheists. Ah, the Jesuits, always finding a way around the rules if there’s money to be made.

It was all too depressing to continue. I walked out onto Chicago’s lakefront, and took one look back at the Art Deco beauty of the place. 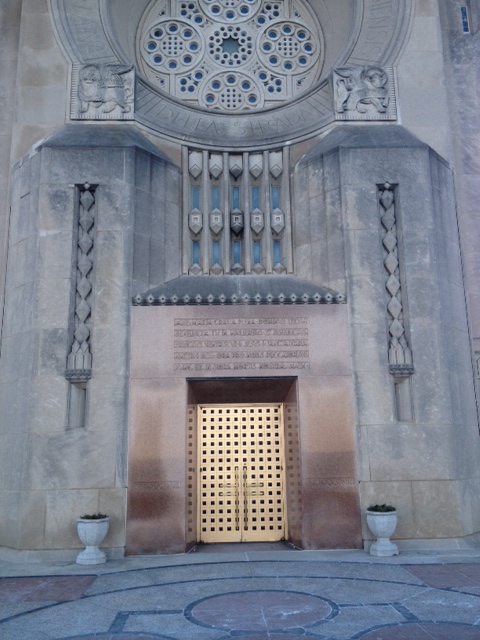 Such a beautiful place, being used to exclude people. It’s just sad.

UPDATE: to everyone in the comments thread who points out that the Church has every right to deny its sacraments and its sacred spaces to people whom it considers sinful, of course. Sure, yeah. My point here is that I find it sad that the Jesuits would continue to do so. Their right. So wrong.