The Shattering Relevance of The Consul at Seattle Opera 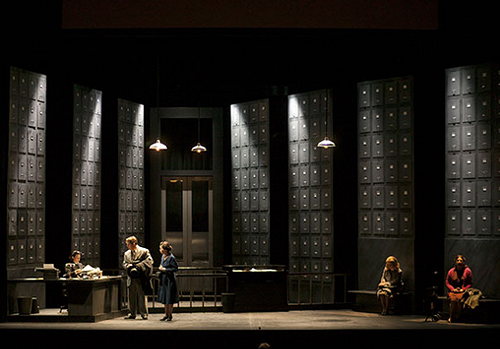 Gian Carlo Menotti's The Consul is a really good opera, a really, really good piece of theater (deservedly winning the Pulitzer Prize in 1950), and a perfectly, terribly relevant story about today. Before I sat down to write this, I looked at the paper: The death toll in Kiev had reached 82; in Venezuela, where students and middle-class citizens are protesting President Maduro, 10 people are dead and more than a hundred are injured; in Syria, more than half a million people have been displaced. This opera, as my date remarked halfway through, is about DPs—displaced persons.

Menotti is probably most well-known as the creator of Amahl and the Night Visitors, the first opera ever written for TV. Unlike most composers of opera, Menotti also wrote libretti; he directed the premiere of The Consul. The music is sometimes lush, melodic, pop-Puccini-esque; at other times, it's somber, spare, relentless. The story is that of Magda Sorel (the fantastically talented soprano Marcy Stonikas, an alumna of Seattle Opera's Young Artists Program who has sung both Turandot and Fidelio for Seattle Opera). Magda's underground, freedom-fighter husband, John (a hunkily torso-revealing Michael Todd Simpson), is pursued by a gang of nasty, gun-wielding men in black. (And fedoras—the perfect mid-century costumes are by Melanie Taylor Burges.)