Part II of our tour diary with Ephrata, "Seattle's Best All Girl and All Guy Dream Pop Shoegaze Band" 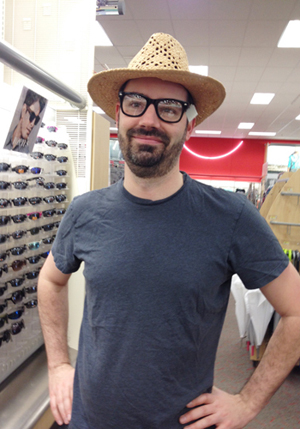 "We started Tuesday like any respectable American assholes would: by going to Target to buy wine and cookies. Also Monday night, we determined that Skadi’s guitar was broken somehow. We assumed it was the result of some baggage handler suplexing it in the bowels of the airport but Brady quickly surmised on the kitchen table that it was the wire breaking loose on the jack. Using tools found in the garage of our AirBNB house, he fixed it up proper and now Skadi can go back to learning how to play "Eruption" without looking.

Anyway, you don’t care about any of this shit. You are reading this to learn about the super interesting music festival called SXSW! So, our first show on Tuesday was at Trailer Space record store, which is this little underground shop on the eastside of town, owned by a Yakima ex-pat named Spot. What a guy...

... We played after the cutest little teenage duo called Rainbow Silk and a non-teenage quartet called Kingdom Of Suicide Lovers that sounded like peak Sonic Youth with a keyboard. Then, in spite of the overtures of countless gregarious pedicabs, we lugged our shit and Skadi’s and Jules’s leftovers from lunch to our next gig the way dreampop bands of the 1800s did; ON FOOT! About a mile over to Cheer Up Charlie’s. Getting around SXSW is hell. Just pure hell. Don’t ever come here. I mean come here, it can be fun, but if you like the simple things in life like parking and not having to slalom through endless armies of total dickface dorks then don’t come. But I guess if you live on Capitol Hill then that’s every day of your life. So sure, come to SXSW.

Anyway, rad show! Awesome venue! Super big and packed, the breeze was blowing through our hair and we felt like Leo on the bow of the Titanic except for the whole “freezing and dying in the ocean a week later” thing. It was the first time we ever played outdoors! Some cute stranger named Emily Michelle Barry Instagram-video'd us (hey Emily, you didn’t happen to capture any footage of the anonymous bastard who stole Skadi and Jules’ lunches, did you???)

After the show, Jules wanted to go party (that’s her thing, the rascal) so she went to go party at the Hulu event for Deadbeat (a new show), lured by the promise of bottomless free grapefruit vodka drinks, free appetizers, and sundry free amusements such as a flipbook photobooth with props and funny hats! The rest of the band went back to our house and chilled out and drank tea and ate cookies and napped and did old people shit. We headed out to go pick up Jules before our last show of the day and it turns out she had been boozing it up at the Hulu party on an empty stomach (the grapefruit vodka drinks were ample, but the alleged appetizers NEVER materialized) and having also had her lunch cruelly stolen earlier, she was rendered, shall we say... wasted. But she’s a lovey drunk! So we endured a van ride of her sloppily telling us how much she loved us all and wanted to hug and squeeze us and blah-blah drunk stuff. When we parked she immediately decided that a curbside shoe change was in order, cus why not? 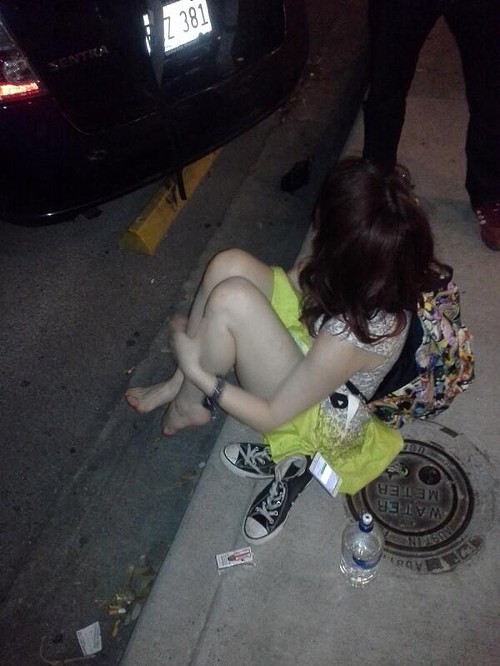 We promptly determined she was severely malnourished, so we administered emergency chicken McNuggets and 600 CCs of water. She also said Taco Bell was not an option because “They are definitely a cover for a meth lab”. We’re not sure of the veracity of that claim, but we will keep it in mind next time we run for the border! Within a half hour she was much more filled to the brim with pink slime and honey mustard, much less “lovey,” and we were ready.

Our last show of the day was at The Continental Club, which is very rockabilly style, and we were definitely the youngsters in the room. One thing about SXSW is that the lineups are a huge potpourri of surprises. If you’re a speed metal band, you are gonna be sharing a bill with an alt-country act, a synth pop group, and some guy playing the sousaphone with his taint. Case in point: the band two before us was this 13 piece rockabilly outfit called "Wifee and the Huzzband" and the main dude had a pompadour the size of a ten gallon hat. 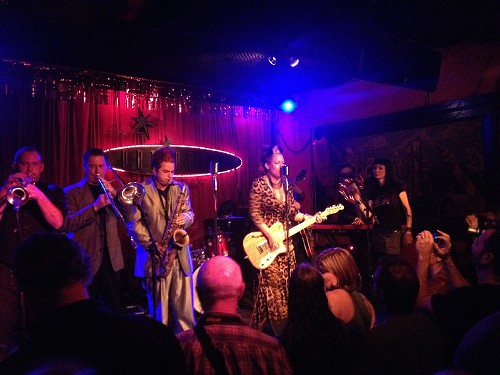 The Continental Club show was a whirlwind affair where every band played 3 songs. Well, except the band before us who apparently had some guy from Timbuk 3 (ooh la la, a SUPERSTAR!) and they were SOOOOOO cool that they played 5 songs. So by the time we got on (we were last on the bill and the show needed to end at 2:00am sharp) the room was already starting to empty out. But we gave those three songs our all, and the die-hard spectators were ready to tear it up hard and shut it down with vigor. It was super fun!

The next morning (actually afternoon 'cause we slept till fucking noon) a guy who does some work for ZoneOneRadio.com in London came to our house and interviewed us. We think it will go well because England is the birthplace of shoegaze and they really like dreamy fuzzy crap like ours so basically LOOK OUT, UK. WE ARE COMING FOR YOU. Plus, Skadi wants to visit the merry English isles (mostly to try authentic sheep offal pudding and see if she can time travel through stonehenge to the age when horses were the primary mode of transportation).

The only show we had Wednesday was a little guy on the outskirts of downtown. It was small but good. We bookended it with a huge pile of cajun fried okra and gumbo before, and then an even bigger feast of fried chicken and fried oysters and fried fucking EVERYTHING at Lucy’s Fried Chicken afterwards. Oh, and pie. Hella pie. Skadi wept at the bounty we were presented with by the waitress. 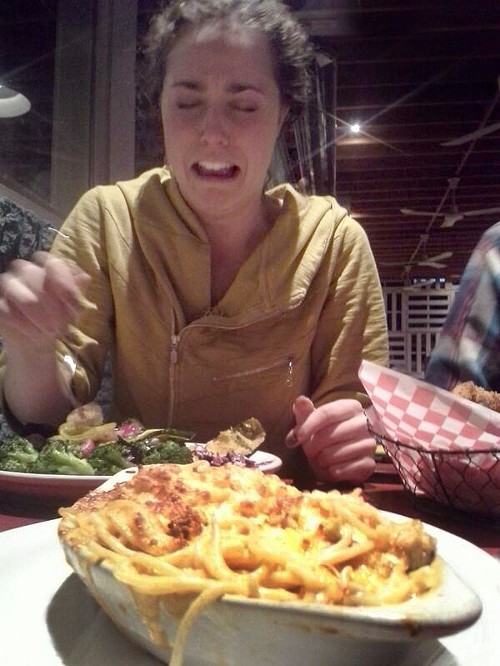 After contemplating our mortality for a bit, we waddled to the van and drove to the house and had a chill evening in trying not to barf up everything we ate. Thursday we have two shows and the first one is at noon, so we need to get up sorta early. 10 am is "rock band early" right? Sorry 'boutcha if you have to get up at 7. "—Ephrata

P.S. "We woke up to the awful news of the tragedy that took place in downtown Austin last night. We want to keep this travelogue light and fun, but the truth is that people died and other people were injured because a drunk person drove their car into a crowd. It’s awful and definitely weighing on our minds. Please, never ever drive drunk. It’s not worth it. You’re not OK to drive. Really, you’re not. Stop doing it. And to everyone affected, our hearts go out to you."