Please enjoy Part III of our tour diary with Ephrata...

"A few days ago, we played a daytime show at the Cherrywood Coffee house. Now you Seattleites may have your idea of what a coffeehouse show is, and you would be right in Seattle terms; some a-hole in the corner playing Ani Difranco covers on a nice acoustic guitar their parents bought them as a present for not crashing the Mercedes, but Austin coffee houses have yards and stages and stuff!
Sponsored

In the middle of an “Ahhh”, a bug flew into Jules’ mouth and, ever the professional, she just chewed it up quick, swallowed the corpse, and kept on singing. We’re pros, I tell ya! Would Nicki Minaj or Scott Stapp suck down a bug without missing a beat? No! Anyway, we met some very nice people there who liked our stuff. A dapper British gent in a polka dot scarf bought a 7”! A baby tried to mosh but the mother scooped her up and took her away from the stage (just like how Brady remembers the Pantera mosh pit circa 1994 when he dislocated his shoulder at the Paramount). But people are SO NICE here. Seattle Freeze Schmeattle Schmeeze! It’s y’all this and y’all that and pleasantries lurking around every corner. THIS must be what the Olive Garden is talking about when they say “When you’re here, you’re family”, and we haven’t even encountered one plate of shitty microwave breadsticks or giant bowl of soggy iceberg lettuce.

Oh and we tweeted at Whataburger again the other night and made a joke about “Give It Here”, a hip hop hit from the 90’s by Def Jef. Well lookie here, Def Jef responded! HOW ABOUT THAT. Let’s make “Give it here, don’t say nothin’ just give it here!” the new “I am hungry”, OK?

Here is the song, it’s a classic!

The next show was a little house show in the living room of a person we met on Twitter. As we were setting up we noticed that a group of planes was skywriting Pi in the sky with smoke puff numbers. Just flying around calculating Pi like some kind of math megadork air force in honor of the upcoming Pi Day (3/14). Enthusiasm ensued.

The show was with Dråpe from Norway (who we also met on Twitter—hooray social media!) and the Parson Redheads from Portland who we played with at Barboza once. Holy fjordballs, Dråpe is SO GOOD. They were so dreamy that the keyboardist had to put her keyboard on pillows. Seriously, though, it will be a crime against humanity if they are not superstars. Let’s get on that as a society, OK? 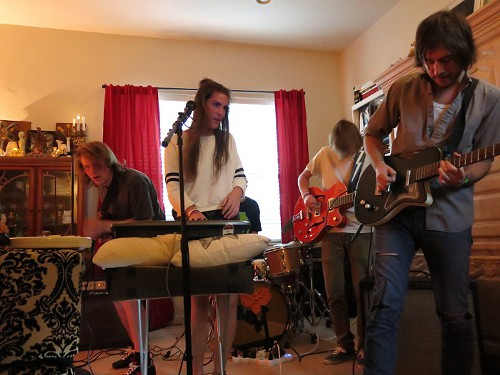 The party was so cool and warm and intimate and we had such a great time. House shows are usually the best shows at these fests. Everybody is in there cus they want to be and you can feel the love from the crowd. And there is usually a couch. Unfortunately, after the bands were done, one party-goer who will remain unnamed felt the love a little too hard and became a little, how you say… TOTALLY FUCKING GRABBY AND INAPPROPRIATE with one of us despite repeated rejections and NOs so we scooted out of there real quick which was the only option other than “throw him in front of a fucking bus”. Which brings us to this next thing...

Dudes: women in bands are not exotic creatures that are there for your consumption like a fucking bauble in a window. They are not into you hitting on them all the time and asking them for a kiss and all that creepy horseshit. Every show, there is always one guy who slimes on one of the ladies in our band. Ask any female musician you know, they’ll tell ya. Just cut it the fuck out! You’re gross and stupid. Grow up and treat women in bands like humans and/or like you treat your mother. Especially if your mother is in a band.

Anyway, Jules and Ben went off to go meet some friends and have some drinks and Skadi and Brady went to a food truck corral to get hot dogs and fries and tacos. Listen, we know that food trucks are a cute little distraction in Seattle and you’re like “Oh, food truck, what a novel notion. Maybe I’ll get a falafel at one if I am feeling adventurous.” but in Austin food trucks are SERIOUS BIZZNISS. They have multiple corrals and parking lots full of them and they all serve up crazy good and wild fare. Seattle needs to get on this shit pronto. Wait, scratch that. We don’t need to be tempted by waffle tacos and wood fired pizza and cheesecake bites all day. Ban food trucks!!! 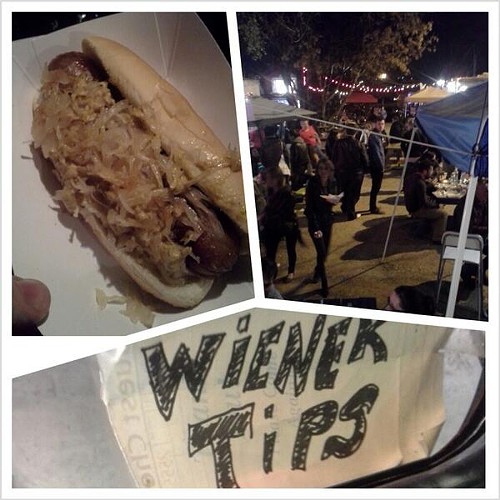 Friday there must have been some unspoken agreement to be tres Francais, because we had lunch at Blue Dahlia Bistro and ate tartines and a cheese board then went to go see Cate LeBon at the Waterloo Records day party. She was pretty good and very French in demeanor, accent and complex chord changes. 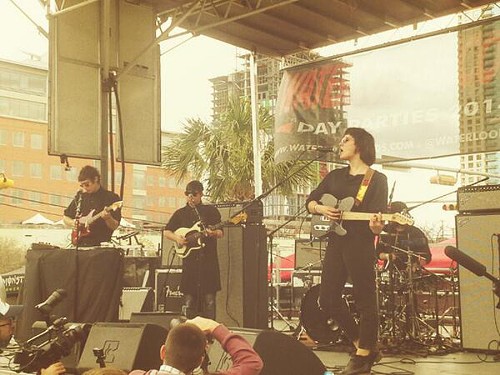 Power naps ensued after, an increasingly needed thing as the trip goes on. What those not in a band might not realize is that, no matter how small a show is, it takes a bit of a toll on you. All the nerves associated with performing put stress on your body and basically when you are done you are TIRED. So, when you play 2 or 3 shows in a day, for a bunch of days in a row your body starts to say “WHAT IN THE FUCK ARE YOU DOING TO ME???”. This may explain why old grizzled rock stars like to pickle themselves with booze and hard drugs. Us? We just sleep and watch House Of Cards on Netflix (no spoilers! Skadi is still on Season 1).

Our next stop was a really cool little backyard show called “Electric Church”. We played our set to a small but welcoming crowd. There was this radical cat kicking it in the yard chasing butterflies and stuff. Show cats are THE BEST. 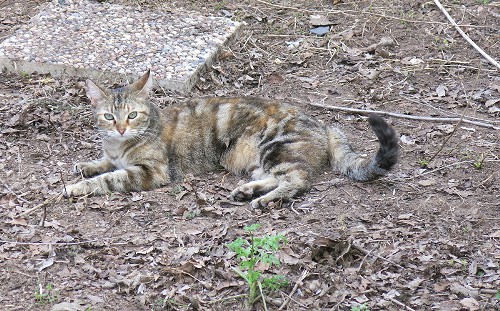 After that we quickly drove downtown and embarked on what would be the absolute WEIRDEST SHOW WE HAVE EVER PLAYED. It was some bizarre vanity showcase put on by an aspiring R&B/pop star and the lineup was this hodge podge of all genres. The tent was GINORMOUS, like the size of Showbox SODO and had a stage and light setup (replete with LASERS) that rivaled anything we have seen in Key Arena. That was all well and good, but there was NO AUDIENCE. Zero. Nada. There was no audience for the R&B/Pop lady either when we showed up. We did not let that deter us from having fun, though. It was actually a total blast. We felt like Coldplay or some other horrifying chart topper. The dulcet strains of our harmonies lured in a rotating cast of fest goers from the sidewalk (a good quarter of a mile from the stage) who seemed to enjoy our stuff and hipsters, children and squares alike all made faces that we interpreted as reverential. Also, the logo for the tent was basically Cookiepuss. 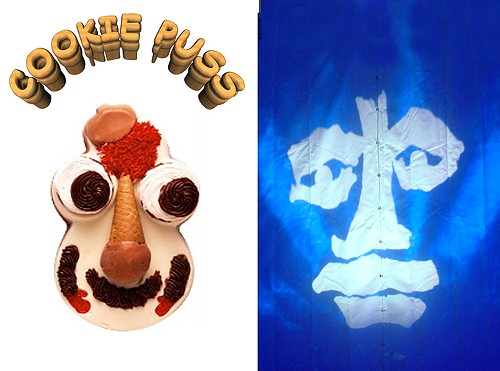 After that we went to eat at Magnolia Cafe on South Congress and the waitress had our sticker on her little waitress book! She had never heard of us and got it from some other band and liked it so much that she put it on her book. She was so beautiful too. We tipped her well with money and some more stickers. (Trolls, don’t even start. We tipped 20% and THEN added stickers. Up yours!) 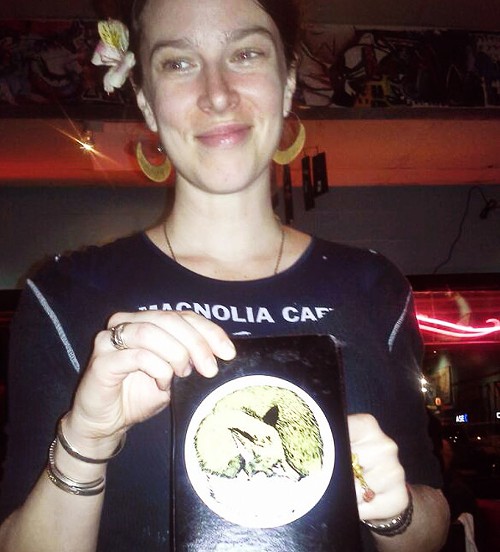 We were supposed to play another show late but our fingers were literally blistered from all this shredding and our voices hoarse from all this ethereal, harmonious caterwauling, so we requested a reprieve from the organizer and he said it was A-OK if we went home and applied hot compresses of peanut butter pie to our aching pipes. We did the right thing and went home to end Pi Day in style and then pass out." —Ephrata