The final installment of our tour diary with Seattle band Ephrata...

"Last Saturday began with an early afternoon slot at yet another showcase, "SXSW Screamer" arranged by our pals The Sour Notes (pictured)—a really fabulous Austin-based psych rock band. They were gracious and kind and really hooked us up hard during the festival. The audience at 'Screamer was looking sparse when we showed up, but once word spread on Twitter that there was free beer and respite from the pouring rain outside people started filtering in...

...For whatever reason we sold the most merch here of any show at the festival, which was “not that much”. Turns out that people don’t really buy merch at SXSW, which makes sense because who wants to carry around a bunch of records and t-shirts all day when your primary goals are finding free alcohol, trying to look like a character from the 80’s movie Summer School (or whatever hipster fashion trend is big this instant, probably something idiotic like “Post Modern Disney”), and bullshitting your way into the Fader Fort to see Warpaint or something.

We left there to find food, and wouldn’t you know we ended up back at Lucy’s Fried Chicken because apparently we are complete fucking slobs with no self control or dietary discipline when tired and on tour. A brief, feverish food-coma followed and then we headed back downtown for our final show of the festival. It was put on by Dallas label Hand Drawn Records at The Brass House. When we got there we met with Bobby, one of the people who runs the label, and he is the SWEETEST DUDE IN THE WORLD. He totally gushed about our band for like 15 minutes and heartily professed how excited he was that we were playing. That’s especially nice to hear because we are acutely aware of how much of a nobody band we are and also that there are literally five million nobody bands in Austin for SXSW all fighting for a minuscule piece of the audience pie.

We had awhile to hang out so we meandered a few blocks over to that big stupid insane Cookiepuss tent from Friday and it was still huge and still completely empty. But, there was a photo booth so we did that. After brief consideration we opted not to don any of the funny hats on the rack outside of the booth because there seemed to be a high probability that, given the state of the SXSW crowds by Saturday, any one of them could have at some point been used as an impromptu barf bag. Of course when we entered the booth, the cornball dude running it said “Wait for the flash. I don’t mean like ‘Flash your boobs’ or anything, but you can do that if you want!” while staring at Skadi and Jules. We gave him eight stink eyes and he shut up and started the booth.

We headed back to the bustling Brass House and started to get pretty amped for this venue to be our final live performance and end the trip on a high note. Then the sound engineer’s assistant came backstage to inform us that there weren’t enough microphones so we could only have three vocal mics. This is a problem because we built our whole sound on four part harmonies. Would Crosby, Stills, Nash and Young be any good without Young? Wait, bad analogy. But you get what we're saying! We politely told her that we needed four mics, and even brought an extra mic and cable with us for just such a situation! She said they didn’t have an extra mic stand. We said we could rig one out of a cymbal stand if need be. She said the main engineer would insist that they still couldn’t run a fourth line. We reiterated that our sound is contingent upon the entire band being able to harmonize so she said she would go talk to the main sound person but that it probably wouldn’t happen.

Eventually the main sound tech marched out to let us know there was no way she was going to give us a fourth mic because “the room is so small that a fourth mic would feedback and it just isn’t going to happen.” Now if you had never used a mixer in your life this would sound very plausible. But Brady has used many mixers, and run much sound (had even run sound for the Sour Notes earlier that very day), and he knows that the size of a room may cause feedback but there are knobs on a mixer called “EQ” that you can utilize to cut out problem frequencies that are feeding back. Essentially: this woman was full of shit and was just being a total dick about us challenging her authority (apparently she had recently done sound for Jimmy Kimmel’s SXSW appearance, so OMG WOOOOO GUYS, A SOUND ENGINEER STAR). We stayed polite and resolute about the necessity for the fourth mic, but inside our hearts (those of us who have hearts) were sinking.

Though we were starting to become downtrodden (“Even if we win this battle and get our mic and get to play, I have a feeling we’ve already lost the war.” was uttered) our hero Bobby learned of this trouble and talked to the owner of the club and blah blah blah and we got our fourth mic (with a stand that magically appeared!). As we loaded our gear up onto the stage, all of the mics were on for no reason and cranked up to 11 filling the room with ominous screeching and feedback that sent half the audience away to go find a less aurally oppressive venue. We gritted our teeth and started our set while the two grouchy engineers continued to be the fifth and sixth Beatle (who play an instrument called "tandem feedbacking mixer that sounds like a walrus being beaten with a tire iron"). This was retaliatory feedback. Deliberate sonic aggression! But there was an unspoken understanding among the band that we would NOT walk off. That we would stay professional and play our hearts out and complete the entire set no matter how tortuous and embarrassing the sound engineers could make the show. Apparently, the approximately 30 people who weren’t chased out by the deafening feedback somehow sensed our resolve because they were HANDS DOWN the most supportive, encouraging, and vocal audience we have ever had (with the possible exception of our first show when Skadi’s entire enormous family of about 50 people showed up, including her Grandma. If it was an actual physical fight we're pretty sure Skadi's family would win since they are all hardy Nordic people skilled with blade and steed).

But the battle at the Brass House was bloodier (figuratively) and the more deflated we felt inside and the worse the feedback got, the harder we smiled and the more we winked encouragingly at each other. The audience cheered and clapped their hands and stomped their feet and even wrote us an anonymous love note:

Around the fourth or fifth song the sound suddenly and miraculously improved and remained flawless for the rest of the set. This point in time probably closely followed the moment that, we’re told, the sound tech and her assistant QUIT. JUST WALKED OUT AND SAID “FUCK THIS FUCK YOU”! You know who fixed the mixer? The sweet kid running the lights who didn’t know anything about mixers. This is how easy it was. We love you, Trent!

So that was an emotional roller coaster—and in many ways both the best and worst show of SXSW. Maybe our whole lives. A lot of the crowd wanted to tell us how impressed they were with professionalism in the face of such douchery. The next band went on, who totally rocked, and we did our best to let Bobby and a couple of the other heroes of the evening know how grateful we were. Then we all went and processed our emotions in our own unique ways—Brady sat quietly by the gear thinking about sleep and food, Skadi made friends and danced her heart out, Ben bought and imbibed bevs, and Jules sobbed behind the merch table for a few minutes and then got up and handed out more stickers while telling everyone how much she loved them.

After this it was 2 am so what do you think we did? (HINT: It rhymes with “Slutaburger”). 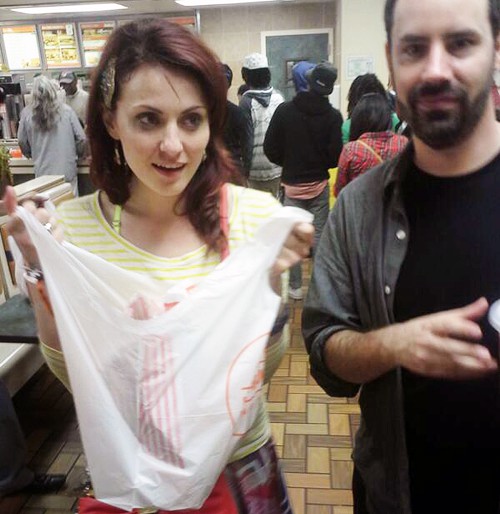 The next morning we packed up our shit, tidied up our AirBNB house and hit the road for our last piece of festival business which was doing a podcast for Austin Sessions. We did an interview and played a few songs and had an all around great time. They gave us bottles of fine, handcrafted beer from Adelbert’s Brewery. We then had to haul ass to San Antonio, to the airport, where we spent several frantic minutes at the ticket counter trying to get the aforementioned beers into our already jam packed luggage. Skadi generously gave hers to a ticket agent who was pleased as punch. The rest of us, greedy like raccoons who had stuck their paws into a trap to grab a shiny piece of tin (and would rather get eaten alive by Old Dan and Little Anne than let it go), wrapped ours up in t-shirts and decided to roll the dice. SPOILER ALERT: The beers survived!!! With only minutes to spare we boarded our flight home which Brady and Ben spent quietly having device time while Skadi and Jules watched The Last Of The Mohicans and cried. 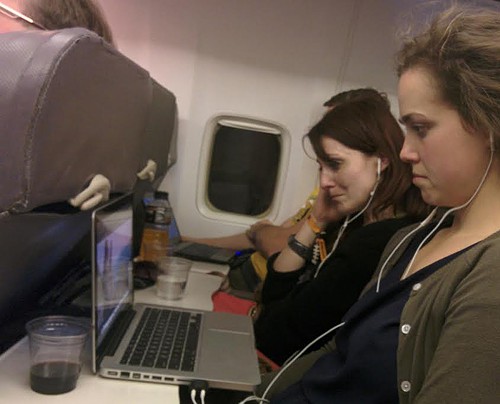 Overall this SXSW experience was very fun, very awesome and very exhausting. Was it worth the time and expense? Only time will tell. We made a lot of new friends, got our music in the ears of a ton of new people (one of whom came to THREE of our shows: We love you Emily!), saw a marked uptick in downloads of our junk on Bandcamp, and had some great band bonding time. It’s too early to say if we'd do it again because we are fucking BEAT and just want to sleep forever and not smell each other’s farts for at least a week, but we all have very warm and fuzzy feelings about the whole deal (except Brady who still doesn't know what a "feeling" is). If anybody needs advice on how to do SXSW next year, get in touch. We’ll be detoxing and icing our blistered fingertips. We’re glad to be home in Seattle, in our own beds, snuggling our own pets, but the draining week we spent together in Austin, with its highs and lows and strange surprises, was perfect in its own weird way… Thank you, Austin. Please stay weird!

As for you, Seattle, come say hello next time we play, which is... uh... well, we don't have any shows booked right now. You got a slot, Key Arena? How about you, Showbox? OK fine, we'll play Doofers in Renton." —Ephrata