This week's fresh horror stories about fashion photographer Terry Richardson are a reminder that some people will use the removal of clothes—especially the removal of women's clothes—as a pretext for exploitation, blackmail, and rape.

What is the state of nakedness these days?

We're in need of artists who use nakedness and nudity for good, and shows that remove layers of assumptions about naked pictures—assumptions that they're necessarily romantic or arty or porny or guilty or liberating or imprisoning.

Intimate Naked is that kind of subversive little variety show. It's a show of nudes, or maybe nakeds. It teaches how to look at naked pictures rather than moralizing about whether or not you should. Dirk Park organized this "warm show for a cold season" because:

Many of us grew up in a period when the viewing of these uncensored moments was hidden. ...As the art world and the internet have been expanding the visibility of the nude, we've moved into a time when the private vision of intimate experience is being shared in new and dynamic ways.

If it's true that the "visibility of the nude" is "expanding," how does that filter down into the regular lives of everyday people? When you find yourself naked, do you feel more like yourself or less? Has anything changed that feeling?

Three separate series hang on three separate walls: photos by Alexis Courtney of the Bay Area, Glenn Rudolph of Roslyn (formerly Seattle), and a row of various anonymous "erotica" shots dating back to the 1930s (collected by Park over the years).

The erotica is fun. It speaks of times and types, cataloging the funny tumble of changing fashions (good lord it's the '80s, even without the shoulder pads!). Running under all of them are enduring questions about posing naked in front of a camera: Who is this for? How will it be used? Uh...do you like it?

The soft-lit color photographs of Alexis Courtney are almost lifestyle shots. They feature young, attractive people projecting lives of sleepy luxury: tangled in nice bedspreads, reclining on pretty patterned furniture, glowing from ever-present natural light. A spreadeagle man in one picture looks like he's in that transitional moment just before ordinary domestic life turns into a sexual encounter. Two dogs sit by his side and stare at us, impossibly awkwardly. Courtney's captured the moment perfectly, but as a group, the images feel a little too studied-casual, too indie-precious.

The stars of the show are the six smaller black-and-white prints by Glenn Rudolph. Each is odd in a different way, but they all have this same quality of modest majesty that's Rudolph's signature, whether he's photographing a train whooshing by in the forest or strung-out teenagers in Belltown in the '80s. Somehow, he can get down on paper the wispy chaos of lived experience.

Park told Rudolph he wanted to do a show about nudes, so Rudolph rummaged through his piles of prints and emerged with six, dating between 1996 and 2012. I'm imagining this gray-bearded, tender eccentric buried in hills of prints at his Roslyn home, and I long for a great big museum survey, even given that a museum is too dead for his soul.

One of the pictures portrays an otherworldly old woman in a mist of double exposure. Her body vibrates; she moved while the shutter was open, and became the shaky force field at the center of the picture, standing naked in her driveway. Because Rudolph accidentally exposed the plate twice, the woman is the still point of a turning world of trees, dogs, houses, and their shadows, flying around her.

In an act of the photographic gods, the only thing in the image that appears in crisp focus is the woman's left eye, shining like a laser, mythic and monstrous. Rudolph told me that he has known this woman a long time, and that she has been through extreme illness and seen too much death. He makes a point of taking her picture every year, seeking to capture glimpses of what she carries.

The influential art writer John Berger was helpfully judgy about nudity versus nakedness, proclaiming that "To be naked is to be oneself. To be nude is to be seen naked by others and yet not recognized for oneself." He's referring to the art-history term "nude," established in the middle 20th century to refer to a whole history of conventions centered on European painting and sculpture. A nude is arranged to be looked at, objectified. Rejecting the colonial and sexist terms of the nude, Berger made nakedness an encouraging alternative. Nakedness is intimacy with yourself, he offered—that's why Rudolph's pictures are intimate. The sitter is keeping some essential part of her exposed self private, but Rudolph makes that unseen part felt, and missed.

A woman in a shell-backed patio chair sits on a sunny balcony, her robe crumpled under her like she pulled it off after sitting down, a straw hat sitting at her feet. She might be a pinup fantasy, except she holds a newspaper in her lap. Her head is bent down, hair forming a blond wall that obscures her face entirely, and she appears to be using the arm of her glasses to poke at one of her nipples. She's relating to her own body, not the camera. That complex relationship is the secret heart of every naked picture.

Nakedness is a time-tested technique of disorderly conduct, an opposition of law and order, but one that's tender and unaggressive. Maybe this is how it best joins with the wayward spirit of Rudolph's photography.

A few years ago, Rudolph packed his pickup and peeled out of town. Gentrification had gotten him down. But before settling in the old mining town of Roslyn, he shot some final hurrahs of his overgrown backyard in Fremont.

On that day, splashes of sun were bursting through a web of tree branches. Under the sky of trees, a naked woman—except for her flip flops—stands precariously on a fallen tree trunk, her eyes fixed on the camera. A partially obscured naked man at her back leans to kiss her shoulder; maybe this is a moment between poses, when the man is reconnecting with the woman outside the context of whatever the photographer is telling them to do.

It takes a second to notice the freakish apparition to their side, a fully clothed man from another world just standing there, a world of T-shirts and baggy pants. It's Rudolph. Light flares frantically across his face, so you can't make it out. But you know it's him because the figure has one hand raised and squeezing the shutter button. 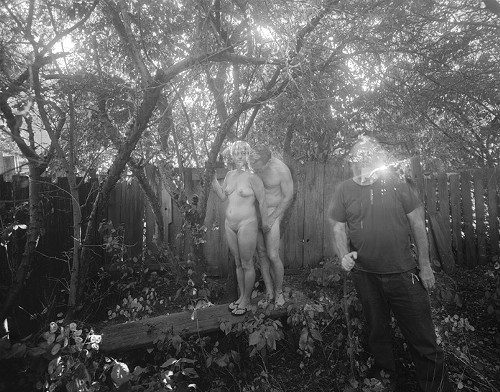 This explains how the photo was shot—from the button in his hand, a cord runs forward to a camera that faces all three of them—but resolves none of the mystery of the light that flickers and refracts chaotically as if the whole scene were shot through a pane of glass conducting reflections of its own. The woman and man in the background are stranded, having been cast out but stuck to the spot, perversely fixed there in that sea of overgrowth and chaotic light by a half-hidden demigod in a T-shirt.