An Untouchable Force In Motion: The Art of Thuy-Van Vu

Thuy-Van Vu works full time, has a son, and paints prolifically. She missed one little deadline for her show, she told me while the paintings were still drying in her Ballard studio a few weeks ago: the deadline to make up a title. Her untitled show of 11 oil and watercolor paintings opened yesterday at G. Gibson Gallery.

It could be called Realia. Realia—a lovely, creepy word—is a fancy term for the three-dimensional artifacts used as exemplars in classrooms and museums. Realia are lifted from the everyday life of whatever culture is being studied: tools, toys, toothbrushes, foods, that sort of thing. They're not to be confused with ephemera, or printed material. Realia are marked by thingness. They belong to some larger untouchable force that's always in motion, like a culture or a history.

In her new portraits of realia, she takes these objects—trapped in glass vitrines, or flayed for display in a museum, or flagged with an explanatory label—and writes a new chapter in their ongoing transformation. What began as a regular object was converted into an archived artifact, and now it's art on the wall.

Together, the painted pieces of realia are like a busload of lost tourists whose expressions all ask the same questions: how'd we get here, and where are we going? They're homesick. Just look at that helplessly beautiful American Dresser (above), its flaying the price of being important enough to study.

How does real become realia? And what happens after? 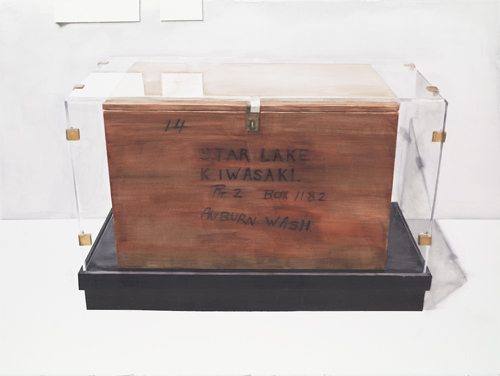 Questions like these link Vu to her family's past. Her mother was pregnant with her when her parents came to the United States from Vietnam in 1975. Unable to visit, they felt their connection with Vietnamese culture both intensify and freeze. The things they carried took on extra significance, while the everyday use of those things was lost to future generations.

We all have to contend with the persistence of histories we never lived in the stubborn, stranded objects left over. Whose objects are they? And what about the ones that nobody wants to claim?

Who wants to claim the Iron Chink? It was a derogatorily named salmon-canning machine invented in Seattle in 1903. They called it the Iron Chink because salmon canning relied on a low-wage Chinese work force, and this machine was designed to outdo the Chinese. Thousands of workers lost jobs. 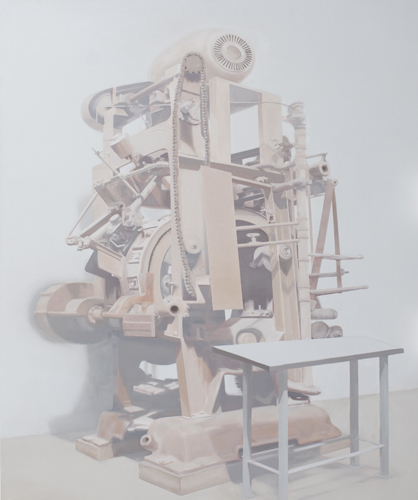 Vu found an Iron Chink at the state history museum. She included the museum's explanatory panel in her painting, but erased the words. The machine looks like it's being erased, too. With its hard pipes and valves and gears painted in soft, faint tones of peach, the Iron Chink fades into a gauzy vapor the way the machine is fading into history, for better and worse. Forgetting our racist past is like pretending it's over. Now, racism is more like the air we breathe than the cold hard machine of law or the shock of a slur.

The palette of Iron Chink matches exactly the tones of Vu's own skin in the nude self-portrait that she insisted hang next to it. Their familial tie is another of Vu's hints of race and gender, which reveal that her paintings are embedded in relationships. It's why, despite being cool, they're relatable. They're committed, on more than just a technical level. She builds in little moments of quiet in the form of flat abstract sections. You can find one right at the center of Iron Chink, and it feels like a meditative stopping spot in the midst of all the other perfectly worked details. 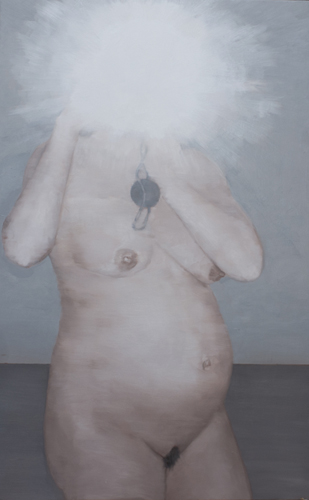 Here she is naked, 27 weeks pregnant, snapping a photograph of herself in the mirror. Her body is marked by a black thatch of pubic hair and a white explosion created by the flash of the camera where her face would be. Let's just say it's intense to see an industrial memorial to a racist robot juxtaposed with a portrait of the artist as a naked, faceless mother.

Week Twenty-Seven is one of only two paintings in the show that depart from depicting realia, and these two pictures are the heart on the show's sleeve. They're risky and vulnerable. A woman artist making a big, serious pink painting? Vu's defiance is on fire with Insulation, which is five feet tall. 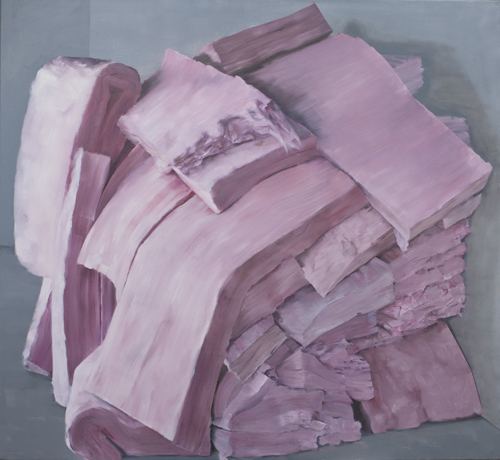 Those luxuriant slabs of pink flop on one another like drunkards in love. The sight of it renders me batty, wanting to fling myself onto the toxic heap.

All representational painting is the transformation of material, but Insulation is holy transubstantiation.

You can see Thuy-Van Vu's paintings at G. Gibson Gallery. A reception will be held from 6 to 8 pm during the next First Thursday Art Walk on April 3.