Dispatch from Haiti: Quiet Before The Storm 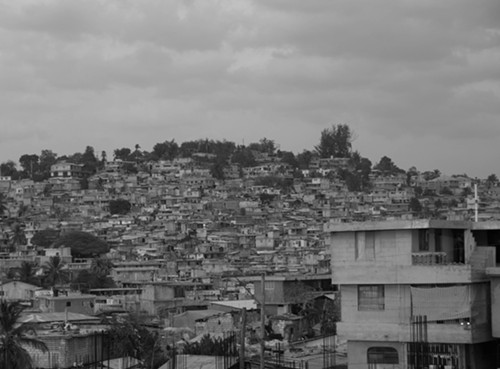 For the past five years, I've traveled annually to Haiti. When I first went there as a reporter I ended up staying through an earthquake, a cholera outbreak (and the protests it inspired), and a fraudulent election (plus more protests) over the following two years. I just made another trip there to consult on a research project.

And when I come back to the States, here's what people always ask me:

How are people doing down there? Are things getting any better?

The short answers are: not so well and not really. During this last trip, it reminded me a lot of when I first arrived there in 2009. While I settled in and began learning Creole, Bill Clinton co-hosted an investment conference at a swanky hotel that sounded notes of bright optimism about Haiti's quiet, steady progress under President Rene Preval. Besides that, Haiti wasn't getting much attention in the foreign press. It's the same now—the government and its international partners mostly make happy little noises these days about beefed up police, greater tourism prospects, and more investment. One could get the impression Haiti's on the right path.

But at 4:53 pm on an innocuous Tuesday in 2010, the Earth groaned. I heard an incredible rumbling noise from within the ground and stuff began clattering onto the floor. The house pitched this way and that, as if a giant was shaking it back and forth. We still often mark events in terms of avan or apre douz janvye—before or after the January 12 earthquake, which is also known as goudougoudou, for the sound it made. It was an unimaginable catastrophe. 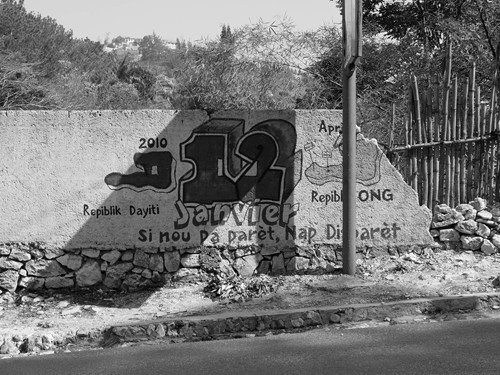 Today, the crisis around the next corner could be natural or political:

1) The rainy season is beginning, meaning rates of cholera infection are likely to jump over the next several months. Rains in Haiti make downpours in Seattle look downright mild—they're often sudden, hot, heavy, and unrelenting.

2) The hurricane season will begin in early summer. Haiti has narrowly avoided large-scale damage from a direct hit by a storm for the past several years, but it's been lucky. The last big one destroyed much of Haiti's fourth-largest city, Gonaives. And cholera rates will go up with any storm.

3) The fault lines running below Port-au-Prince remain active—there was another tremor nearby just days ago. It's only a matter of time before the next quake hits the city, but there's been no coordinated effort to decentralize Haiti's population across its land and relieve the burden on the overcrowded city. And there remain many cracked or badly-constructed buildings: 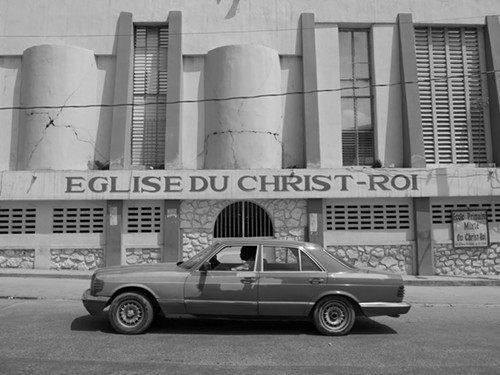 4) Elections are overdue, and discontent is smoldering beneath the surface. The government of Michel Martelly has been promising elections for the past few years, but has put off enacting them, throwing Haiti's parliamentary system into disarray. Only last month did the administration finally pledge to hold elections next year.

The other question I get all the time is, What can I do to help?

Remember that good intentions are often harmful. I sat on the plane next to a missionary who, to her credit, was realizing on the way home that she should have donated directly to the Haitian village she's trying to support, instead of traveling there to build schools and paint houses—jobs that Haitians could do themselves.

I suggested to her that Americans would do much better by Haiti if they'd just make sure their own government stopped undermining the country. She did not know why Haiti is poor, but was curious. I explained a little bit.

Haiti used to be far more self-sufficient, but in the 1980s US development "experts" led a campaign to exterminate the country's Creole pig, a hardy species that Haitian peasants relied on heavily for their livelihoods. The pigs were replaced with ones from Iowa that were supposedly less vulnerable to swine fever, but they failed to adapt and largely did not survive.

Another thing that undermined Haiti's ability to feed itself: Bill Clinton. After the quake, he admitted in Senate testimony that he'd made a "devil's bargain" by pressuring the Haitian government to slash tariffs on imported rice during his presidency. He said "it may have been good for some of my farmers in Arkansas" and went on, "I did that. I have to live every day with the consequences of the lost capacity to produce a rice crop in Haiti to feed those people, because of what I did. Nobody else." Here's a photo I snapped of American rice being unloaded near a market—now it's all anyone eats: 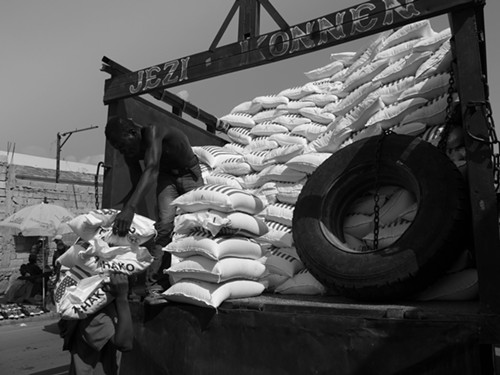 Both Clintons, since the quake, have spearheaded troubled, mismanaged initiatives that weakened rather than bolstered Haiti. Bill co-chaired a failed commission that was supposed to manage Haiti's reconstruction after the earthquake, while his foundation stuffed survivors into noxious, unsafe trailers set up by a corporate lackey and claimed it was delivering earthquake relief.

The State Department, under Secretary Hillary Clinton, meanwhile, pushed USAID into dropping its own plan for sheltering displaced earthquake victims. Instead, it had the agency build bare-bones housing for workers at a new industrial park at the opposite end of the country. Promises, thus far unfulfilled, were made of tens of thousands of jobs that would be generated by the new park. Its largest tenant, a Korean garment manufacturer for the likes of Hanes and Wal-Mart lured to Haiti by Clinton herself, isn't even paying its textile workers the minimum wage. Thanks to WikiLeaks, by the way, we know the Obama administration worked with factory owners against efforts to raise that wage from a few dollars per day. As always, the argument went that it would kill jobs.

I know this is a fringe view, but if there's any justice, Hillary should be disqualified from any shot at the presidency for how she and her husband have helped screw over Haiti, especially after the historic tragedy (and opportunity) of the quake.

My missionary friend also didn't even know about the cholera outbreak in Haiti, which has killed some 9,000 Haitians and sickened hundreds of thousands. Crucially, she didn't know that the disease was introduced to Haiti by the very people sent to protect its population: United Nations peacekeeping troops. And she didn't know that the State Department urged a federal judge this month to dismiss a lawsuit seeking compensation for the victims—claiming the UN has "absolute immunity" from prosecution in national courts.

Then I get this question: Wow, that's depressing. Are you optimistic at all about things going forward, or is it all bad?

Optimistic. "Haiti is best defined as increasingly underdeveloped not because it failed to fight for its own destiny, but precisely because the people of Haiti fought too hard," the anthropologist with whom I worked during this last trip has pointed out. And they will keep on fighting, as they have since they won their independence in 1804 in modern history's only successful mass slave revolt.

The key is strengthening Haiti's sovereignty. For one thing, soon Haitians will no longer be under military occupation. Virtually every time I covered a protest or demonstration, foreign "peacekeeping" troops in blue helmets and armored cars would appear, pointing shotguns at people, shooting rubber bullets and tear gas. One of them pointed his handgun at my head while I filmed a peaceful demonstration outside a UN base. Their departure in 2016, which the United Nations Security Council contemplated this week, will embolden and reinvigorate Haiti's rich tapestry of peasant, worker, and pro-democracy groups. And their withdrawal will remove a foreign prop for the current right-wing government—a regime helped into power by the United States, just as the last elected, progressive government was pushed from power in a US-backed coup d'etat.

Reparations for slavery—and Haiti is owed an awful lot in that regard—could also be on the horizon.

And then there's this:

Claudy, on the left, is a friend of mine whose house collapsed in the quake. Kervens, on the right, is her youngest son. They live in a tent way up on a hillside that leaks in the rain. Claudy's getting older and is much thinner than when I first met her. But she yelled out and gave me a strong hug when I made it up to see her. "Depi mwen pa travay, m santi m pa anfom," she told me—"If I don't work, I feel unsettled." So each day she walks down and sells bread from a local bakery, and pays for school for Kervens with what she makes. Kervens is only 12-years-old, but he speaks a little bit of Spanish, French, and Chinese. He was eager to practice and read portions of the French book I'd picked up (from a former electoral official detailing how the previous election was manipulated). He even taught himself to how to fix busted cell phones.

There's also these guys, left to right: Jean Evans, a neighborhood friend whose name escapes me, and Moise. We used to play soccer in a gravelly street, and at night, I'd see them studying by the light of the only working streetlamp nearby. This time, we sat and drank Coca-Colas and they practiced their English with me in an alleyway. 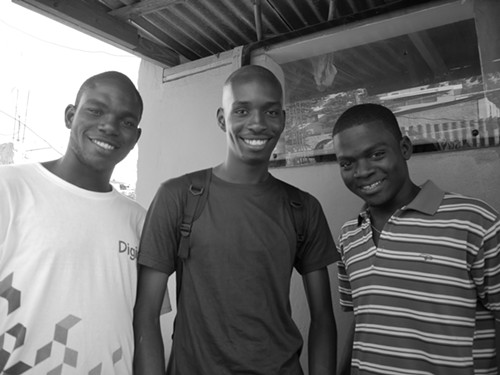 I could go on, but needless to say, Haiti is a brilliant country and so are its people. So educate yourself, back positive American policies towards the country and attack all the bullshit parts, and choose who you donate to carefully. And go visit! What we call the Seattle freeze does not exist in Haiti—in fact, it's the opposite. It is a deeply colorful, warm, and passionate place, not to be missed.

The University of Washington Is Taking the CIA to Court

Seeking Justice for Survivors of a Massacre in El Salvador, the Center for Human Rights Is Suing the Agency Over Withholding Public Records