I had a feeling, based on their singles and videos to date, that the Coathangers would blow away the Black Lips when the two Atlanta bands played Neumos on Friday, and I was right—they did.
Sponsored

I had never seen the Black Lips before, and they got the job done, though I'm not sure they'll ever top 2008's Good Bad Not Evil, the great record through which I first made their acquaintance. It's just that the ladies brought more of the music I wanted to hear. If they're a punk band at heart, they pack more complexity into their sound than their volume and energy would indicate as there's just as much proto-metal, riot grrrl, and other styles roiling around in the high-octane mix. 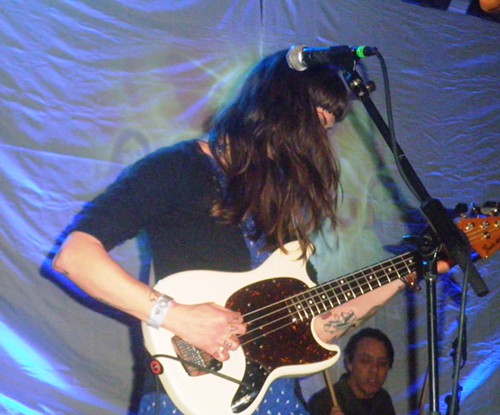 I told my friend that I wouldn't be able to get to the venue until 9:30pm, though I ended up arriving earlier than expected. Consequently, I heard two tracks from Seattle three-piece Universe People from outside the walls before we went in. Unfortunately, I only got to see them play one song before they wrapped up their set. I'll try not to do that again as I liked what I heard of their spirited pop.

I'm sure there were a few people who had heard of the Coathangers before they began to play as they've released four records in the past eight years, including this year's Suck My Shirt, which appears on Seattle's Suicide Squeeze, but I would imagine that most were there to see the more established headlining act.

Towards the end of their set, the Coathangers switched instruments several times. If guitarist Julia Kugel, who sang lead on most songs, brought the post-punk moves, tattoo-sleeved drummer Stephanie Luke brought the crunch of metal as much through her hard hitting as through a rough and tumble voice that channels Lita Ford, Cherie Currie, and Joan Jett—all at the same time. Bassist Meredith Franco, who sang one number, added a dose of new-wave weirdness to the proceedings—"Nestle in My Boobies" from the group's 2007 self-titled debut—before flinging herself into the throng. If you can imagine a cross between LiLiPUT and the Runaways, you're halfway there. Just add some Slits to the mix, and you've got the gist. 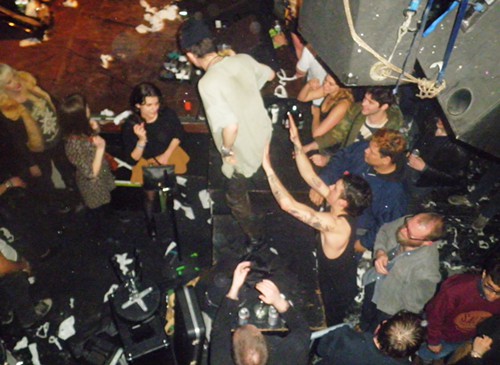 Afterward, the Black Lips seemed anticlimactic in comparison, though I'll submit that was I tired as hell—I'd been up since 5:30 in the morning—and wasn't able to give them my full attention, because I knew the crowd was gonna get feisty, so I moved to the balcony. Plus, my feet hurt, and I needed to sit down for a while.

The quartet played the expected favorites "Bad Kids" and "Katrina," but I failed to enjoy the shimmy shake of "New Direction" as much I would've liked, since I now associate it with a T-Mobile commercial. Also, they left out "Veni Vidi Vici," their finest single, unless they played it in a form that rendered it unrecognizable.

Between the beer cans the audience threw on stage and the toilet paper the Coathangers flung at the band, the stage was a mess by the time they played their last note. Front man Cole Alexander hung around for a while to mix and mingle with the crowd, and I was finally able to snap a few pictures. While they were playing, I wondered why I didn't see Kelly O anywhere, since she said she was gonna be at the show, but I realized later she was good for her word, and visual proof lies in the grainy images above and below (I'm just sorry she didn't take any photographs as her pro-grade gear has my little digital camera beat). 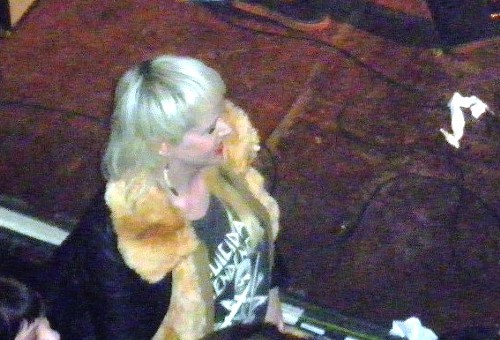 From the smile on her face, it looks like Kelly had a good time, and she even managed to emerge puke-free, unlike the gooey time she saw them at the Funhouse. Puke aside, I'm sorry I missed that night. At this point in their career, the Black Lips aren't likely to play clubs that small again, though grimy, juke-type joints are a better fit for their countrified glam-meets-garage maelstrom. As for the Coathangers, they made it—the tired eyes, the aching feet—all worthwhile.