Things went very smoothly last night for Bryan Ferry and his eight-piece band at McCaw Hall. Very smoothly, indeed. Which is not to say that there weren’t perverse decisions made regarding track selections and song order and with the arrangement of “More Than This” (more of which later). But overall, the Roxy Music icon commanded the stage with the expected aloof decorum and debonair bonhomie of a rich British glam-rock-turned-romantic-crooner legend. He always seemed older than his years, and now in his late 60s, he's relaxed into one of those consummate pro entertainers with just enough of a weird streak to keep the Vegas-ity at arm's length. Ferry also placed his keyboard way in the back, which was a humble gesture of solidarity with his lesser known bandmates. They may not be Eno/Manzanera/Mackay/Thompson/Jobson et al., but they manifested the songs with exceptional finesse.

We—a large but not sold-out crowd of mostly affluent-looking, middle-aged-and-older white folks—couldn’t have begged for a better beginning. “Re-Make/Re-Model” barreled and blared out of the gate with startling vigor, full of brassy flourishes and powerhouse drumming from Charisse Osei. You know that part where all the players take turns soloing? They nailed all of ’em, even the trés wonky keyboard one (I was so far away from the action that I needed a telescope, so I couldn’t tell if it was Ferry or Paul Beard who executed it).

The next highlight was “Ladytron,” which as explained here, is one of the greatest songs ever written. They bathed the stage in vivid green lights and the band delivered it with the requisite gallant majesty. Saxophonist Jorja Chalmers—perhaps the real star of the show; sorry, Bry—beautifully articulated the intro; Andy Mackay would’ve been proud, and the song culminated in perhaps the most elegant prog-rock freakout in memory.

An early surprise was the appearance of JJ Cale’s “Same Old Blues,” which Ferry originally covered on his 1978 LP, The Bride Stripped Bare. It was muscular yet hushed blues funk. Then came “If There Is Something,” the third song from Roxy Music’s 1972 debut and we were only six songs into the show. It was as if Ferry were reading my mind, running through my favorites, but kind of blowing his wad early. This is yet another song that qualifies as one of greatest in rock annals, and it satisfied, but it also revealed Ferry’s lost vocal range. He needed backup singers Bobbie and Jodie to prop up his aging pipes at the tune’s climactic passage (“Shake your head girl with your pony tail/Takes me right back” etc.) Still, a stunning performance that choked up your correspondent. 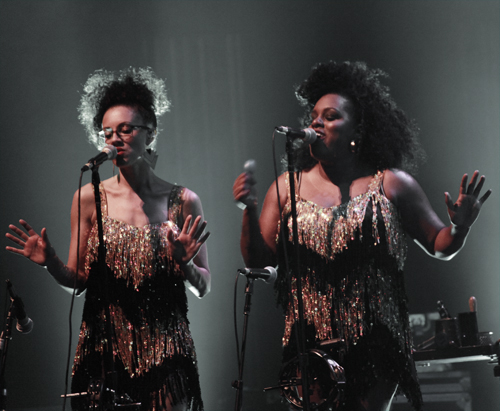 The oddest decision of the night was to do “More Than This” in stripped-down ballad form, devoid of the panoramic glamour of the Avalon version—and to plop it in the middle of the set, smack dab in a stretch of downtempo, sometimes maudlin resignation? Strange. Ferry sang with a distinctly unglamorous weariness with only sparse, spangly guitar and keyboard accompaniment. This arrangement mainly served to spotlight the wear and tear the years have taken on his quavery croon. So it was both a brave move—and a somewhat foolish one. “Avalon” followed, its sad-bliss, gilded yacht rock still glimmering and possessing one of the most gorgeous chord changes ever. 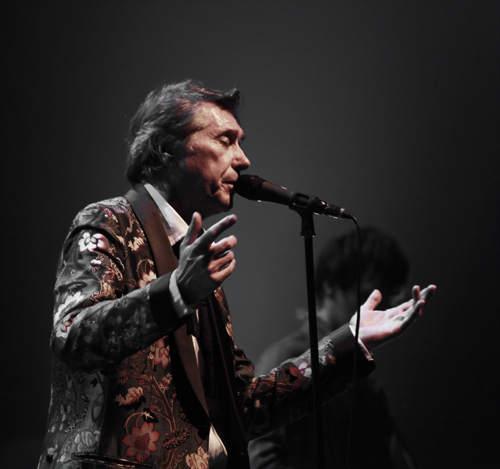 “In Every Dream Home a Heartache” remains the finest composition ever about loving an inflatable doll and it showcases Ferry’s aptitude for writing songs with split personalities. After he intoned the famous, “But you blew my mind!” the band burst into some impressive climaximum rock and roll. “Prairie Rose”—the only song done from Roxy’s Country Life, scandalously—seemed too subdued and could’ve used more twang in the guitars. This song should leave you awash in ecstasy, but it didn’t quite reach that level last night. Then came “Love Is the Drug,” and you can guess the rest. Yes, this song, Roxy Music’s only US hit, provoked the most dancing in the aisles, with all the predictability of the sun setting in the west.

The next three selections surely pleased the hardcore, old-school Roxy fanatics: “Both Ends Burning,” “Virginia Plain,” and “Editions of You.” “Both Ends Burning” surprisingly sounded more urgent than the Siren version and Ferry ripped on harmonica. “Virginia Plain” was a dazzling, raucous celebration of Stranger art director Aaron Huffman’s favorite Ferry work. I hope he caught it. “Editions of You” accelerated the evening to a momentous conclusion, with the house lights popping on during the “WOO!” punctuations. THIS should have been the set closer, but the group went off for a brief while before encoring with “Running Wild.” Ending with a sultry, melodramatic, midtempo deep cut from 1980's Flesh and Blood is so wrongheaded, one has to admire it. 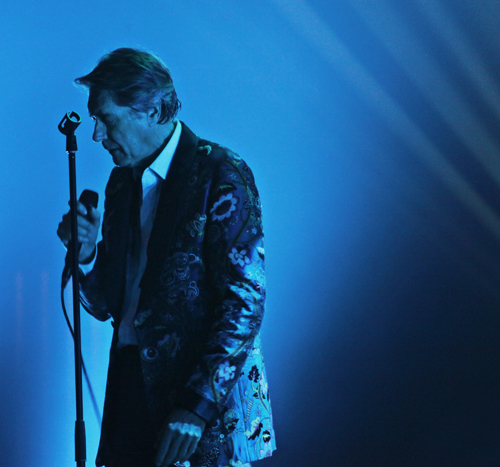 What one doesn’t admire is Ferry’s decision not to do any songs from 1973’s Stranded, old bandmate Brian Eno’s favorite Roxy album. Stranded boasts three of the strongest creations in Ferry’s canon: “Street Life,” “Amazona,” and “Mother of Pearl.” (While I'm griping, we could've used "Whirlwind," "Out of the Blue," and "The Bogus Man," too.) Maybe some other lucky city on the Can’t Let Go tour will get ’em. Nevertheless, despite some snoozy, sappy segments, this show hit more than enough lofty peaks to make you not regret taking a chance with Bryan Ferry at this late date.