On Lady Rizo and the Smell of Others 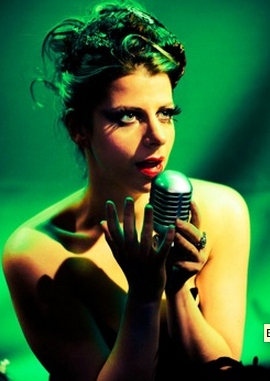 So last night I had the good fortune to attend the Triple Door performance by Lady Rizo. I'd seen her as a (completely naked) performer in Young Jean Lee's Untitled Feminist Show last year at On the Boards, and heard her (beautiful) singing on Moby's Wait for Me, but I'd never before experienced her cabaret act, and it was delightful. Sometimes it seems like she's simply a master at wittily killing time (with banter, poses, audience interactions) but then it's time to sing and that amazing voice comes out. Among the musical highlights: a sultry cover of Neil Gaiman and Amanda Palmer's "I Google You," and a perfectly complete inversion of Nirvana's "Lithium" (whose chorus scream was rendered as the sprightly "Yeah!" of a jazzy chanteuse.)

Unfortunately, the performance of Lady Rizo was temporarily upstaged by the attendee who was led to his seat near me just as the show began, and immediately began issuing forth gigantic waves of stink. The man was in his 20s, with a big full beard and the clothes of a man who spent the day working outdoors (maybe construction, maybe panhandling?). But the stink was no common end-of-day musk. It was hardcore BO with mossy slept-in-the-rain underpinnings, and it was so hard to ignore we eventually had to change seats.

When our server brought our check to our new seats, she apologized profusely, commiserated about the astounding stench, and joked that the man's stink might render the area temporarily inhabitable. We enjoyed the rest of the show and then went home. But now I want to ask you, dear readers...

How would you respond to a person aggressively stinking up a public arts event?