The Oso Debris Field, Four Weeks After the Slide 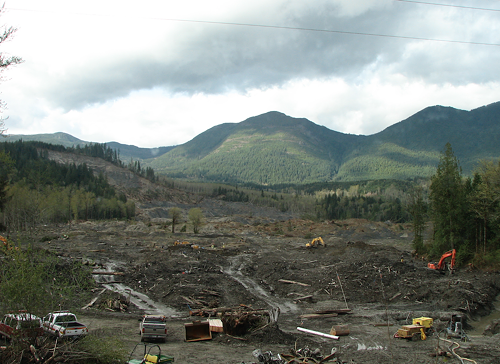 This Saturday was the four-week anniversary of the mudslide in Oso, Washington. People up there, including Trooper Chris Webb of the Washington State Patrol, said most of the reporters and big media outlets pulled up stakes and moved on two weeks ago—but hundreds of people are still up there, picking through the debris field, looking for the remains of two more missing people. (So far, 41 have been recovered and 39 of those have been identified.)

The longer-term projects—figuring out what to do with the blocked river, reopening highway 530 to connect Darrington back to its community in Arlington—are on hold until the final two are found.

The national gaze is about to swing briefly back to Oso—President Obama is scheduled to visit tomorrow before his tour to Asia. I went up this weekend to look around.

One surprise I hadn't read in other reports from the field is its peculiar smell. Some parts of the site have a heavy chemical and metallic odor—not like gasoline or ammonia or paint thinner but a combination of all that and more—that lingers in the mouth. A few weeks ago, Dick Walker, a senior spill advisor for the Department of Ecology, said some hazardous materials were to be expected (gas and oil from cars, acetylene and propane tanks, a kaleidoscope of household solvents). But the smell, which workers said comes and goes, seemed unusually strong given the circumstances. 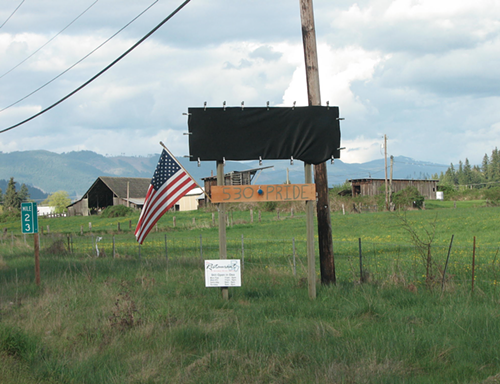 The road to Oso is punctuated with hand-painted signs of support ("We [Heart] Oso") and thanks to the hundreds of people who've poured into the area, from all kinds of agencies, to help with slide relief. The sign above used to indicate the mileage towards streets, including E Steelhead Drive, that the slide wiped off the landscape.

Sgt. Whitcomb—who, like Trooper Webb, is one of those hundreds of people rotating in and out of the disaster area—talked with a firefighter who said that when he puts out a fire, there's at least a structure still standing, and a street with other structures on it. "But here," Whitcomb said the firefighter said, "a whole community has been erased."

On our drive to the slide site, after he picked me up at the local community chapel in a van, I asked Sgt. Whitcomb if there was a horizon for ending the search. It's possible some of those remains, buried beneath a mountain, will never be found. He said the idea of a deadline had been discussed but rejected. "The operations chief says they'll go as long as we need to," he said. The mission is to find the other four and to recover, catalogue, clean, archive, and store the property of the dead for family members to reclaim. 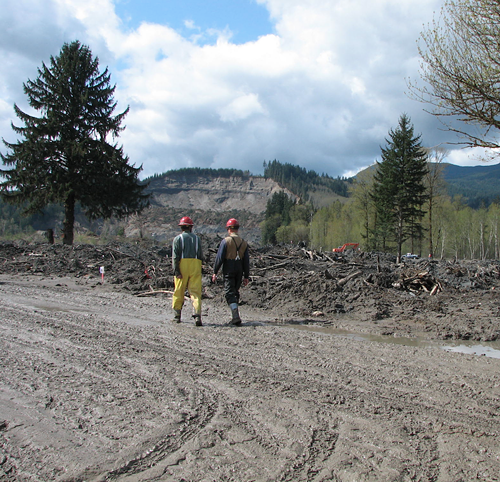 The silt from the slide is pale and fine, and its mud has a slippery consistency that can suck galoshes almost down to the knee, like wet concrete that has just been poured and hasn't begun to set.

Excavators, some on pontoons so they can float through the swamp, are the main tool of slide relief. (You can see an orange one in the background in the picture above.) Some have been been expanding old roads to accommodate new traffic, building pathways through the muck, and digging channels that, along with a series of pumps, are trying to control the water flow—every time it rains, trying to sort through the shredded valley of mud, timber, and metal is somewhere between extremely difficult and impossible.

The people who work the excavators, Sgt. Whitcomb said, are "absolute stars." Especially in the beginning, he said, "the excavator guys were out here every day—the machines were breaking before they were." 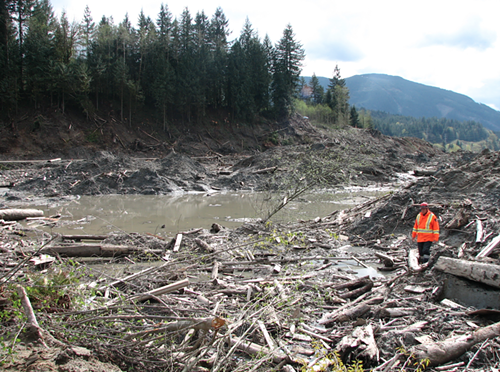 The recovery workers have been calculating the most likely place to find the remains in the debris field, Sgt. Whitcomb said, not based on where the houses were, but where they were likely to have been pushed by the force and volume of the slide. 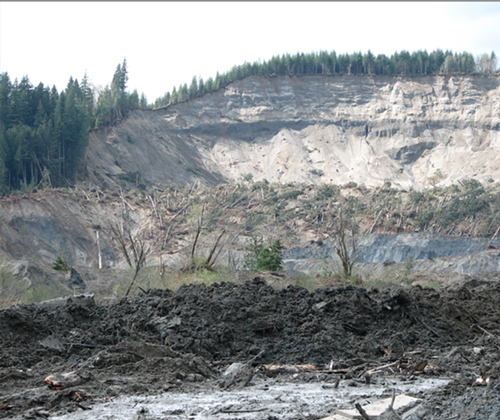 Many of the workers are protective of the families and it's considered polite to not show too much identifying detail of the damage—the specific cars wrapped around trees or too much of any one house. (Outsiders with cameras can attract glares and grumbles.) But you can see from this detail shot—hopefully not too revealing—how the slide came within feet of this house's doorstep before stopping. There's another house on the site, which I did not see, that's been nicknamed "Lucky" because of how closely the slide stopped before hitting it.

Other excavators have been gently sifting their tongs through piles of debris—with surprising tenderness, given the size and power of the machines—like they're poking at mashed potatoes with a fork. Near these excavators, groups of "spotters" stand, watching for a sign of the missing. 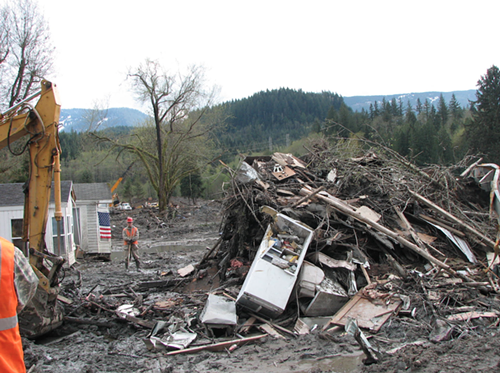 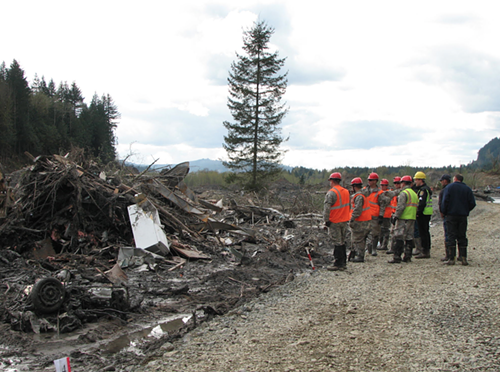 Though nobody I've spoken to about the slide in the past few weeks would say it on the record—out of respect for the solemnity of the mission and for the families—the search is not for whole bodies. As those excavators comb through debris, picking up small loads from one pile and dropping them in another, the spotters and the search dogs are looking for pieces of bodies. 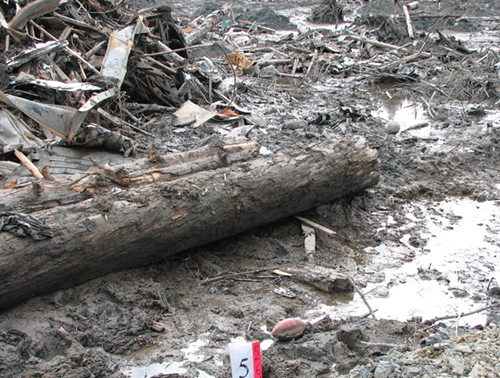 Last Thursday, searchers had found a big piece of timber and some people—presumably sawyers like these guys—had carved an impromptu wooden plaque. 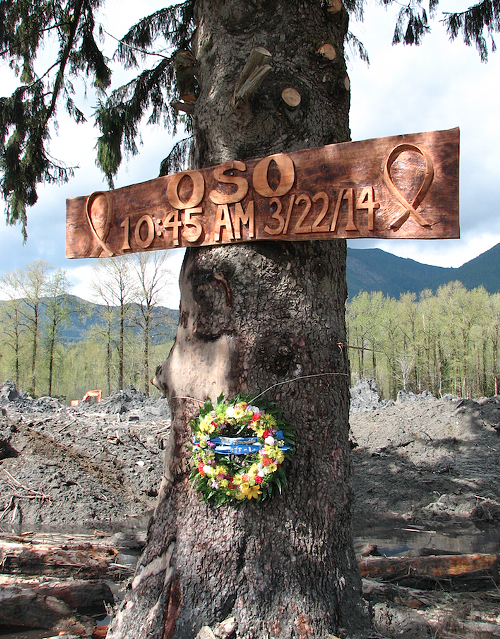 At 5 pm, Sgt. Whitcomb said, after the plaque was done, there was a spontaneous memorial—excavators gathered, lowered their buckets, and the wreath and plaque were hung on that surviving tree. 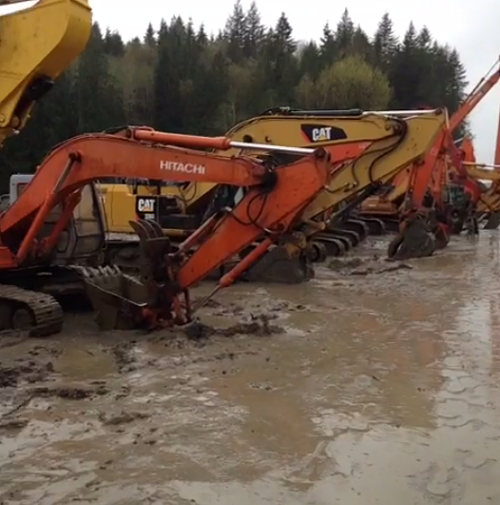 One rescue worker described the slide as "a blender" and mundane objects were scattered everywhere: a child's bicycle, a car wrapped around a tree, a part of a swing set, knots of wire and metal, a football, a basketball, a bag of birdseed, a toilet, plastic tubs of "family-size" ice cream, lamps, broken sticks of timber, a wrench, flotillas of shredded insulation, sheets, couch cushions, a drying rack for dishes, a fridge, tanks of what may be propane or some other gas. The homes and the landscape had been turned inside out—trees with their root balls sticking into the air but their crowns in the mud, entire rooftops buried underground but the most intimate objects in a household exposed to the sky. 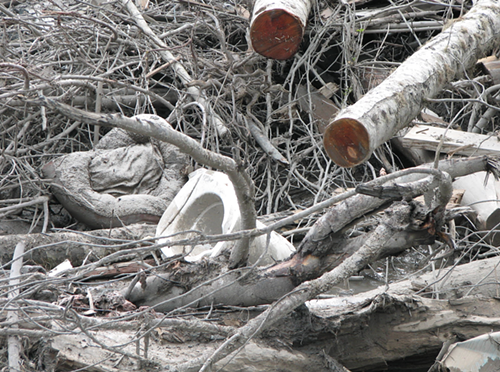 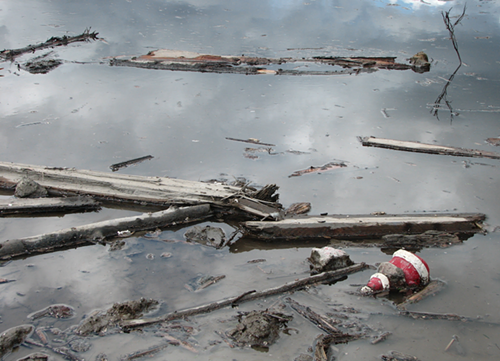 Another reporter told me one of the slide victims who is still in the hospital, after nine surgeries to try and save his arm (here's a fundraising page for his expenses), said he just hoped the search workers could find his fishing poles. 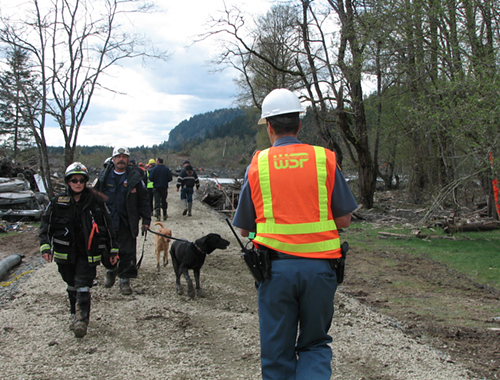 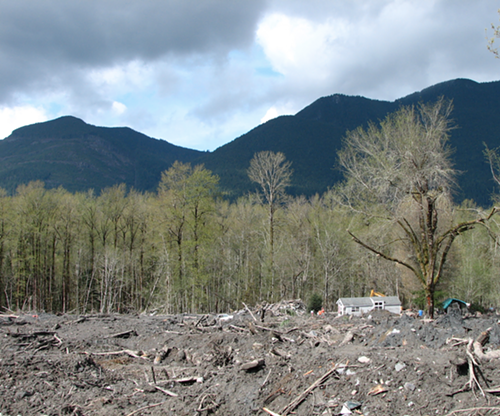 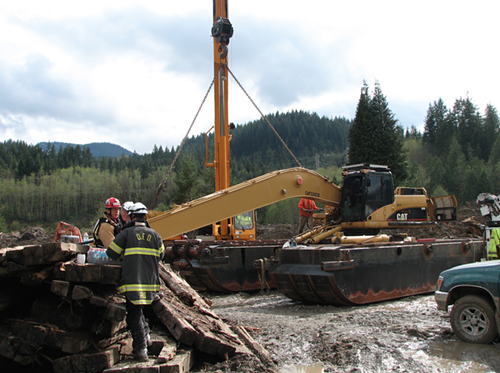 There were a few happy exchanges—one man in a wispy, white mustache and fireman's uniform told a man in a police uniform "I love cops, I just wouldn't want my daughter to marry one," which led to them trading cop and firefighter jokes—but most people had stony expressions and only occasionally returned smiles or greetings. Sgt. Whitcomb and Trooper Webb said there were mental-health professionals onsite, from grief counselors to "stress-management" specialists.

"And there are a lot of chaplains," Whitcomb said. 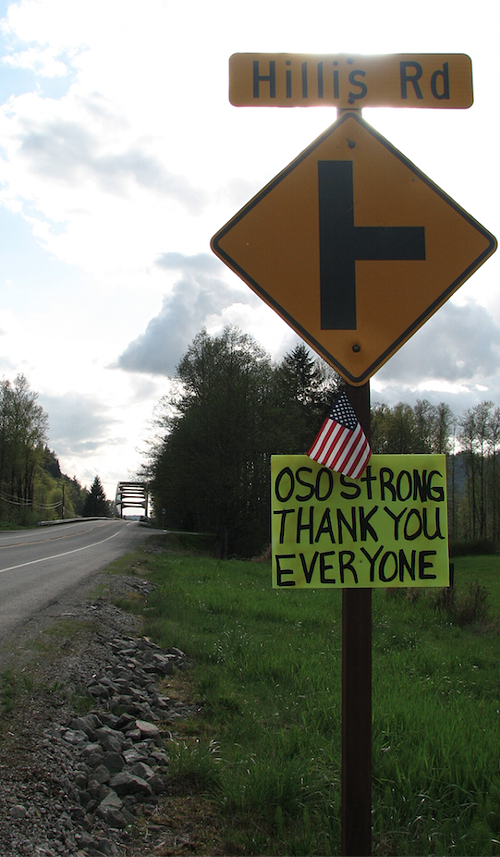