From today (Earth Day) to May Day, activists plan a re-Occupation of Westlake Plaza. At the very least, they intend to serve a free, vegan dinner every night at 5 pm and hold a general assembly at 7 pm. And how many people will stay the night?

"We don't know," said Lizzi Duff, an activist with Occupy and Rising Tide.

After the first general assembly of Occupy Seattle in 2011, Duff said, a few people gathered beneath a tree and talked about who wanted to stay. Duff laid out their (Duff's preferred pronoun) sleeping bag and went to sleep in a light rain. When they woke up at 3 am, 15 tents had appeared. When they woke again around 7 am, the number had doubled. "They mushroomed through the pavement," they said. "By the fourth night, we had 150 to 200 tents, sheltering and taking care of 300 to 400 people."

"Are we lighting another fuse for another fire of resistance and protest?" they asked. "Nobody knows."

The re-Occupation is part of the Global Climate Convergence, a series of protests and actions in 50 US cities planned between now and May Day. The Convergence, Duff said, is "a response to objective conditions getting worse in terms of economic disparity and ecological collapse. If we don't radically change now, mass death is certain. This is endgame stuff."

Tonight is also a permitted, night-long event for a coalition of homeless folks and homeless allies from the various tent cities, Nickelsville, and some of the indoor shelters. "It's nice to be able to leave your bag here and not worry about it," said Andreas, who's ben homeless for several years. Sometimes downtown coffee shops will also let him leave a bag for awhile if he's going somewhere to shower or take care of personal business. "It's nice to have a community." 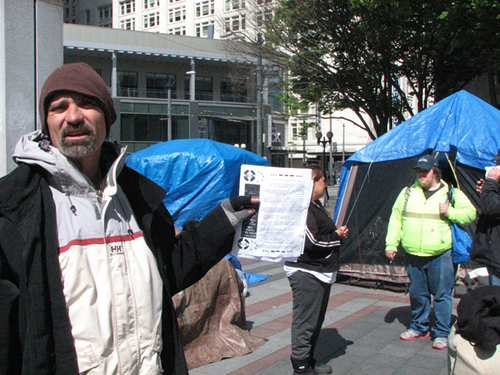 Terry and Andreas are not planning to be in Westlake tomorrow night, when the real test for this re-Occupy effort will come—after the permit runs out. "We're stressing that everyone needs to make up her, his, or their mind about the best thing to do when the cops come in," Duff said. But they're optimistic and say partnerships are forming with Greenpeace, the protesters at the immigrant detention center in Tacoma, and even the Transit Riders Union. "Racial justice, economic justice, ecological justice," Duff said. "People are beginning to realize it's all the same fight."

Dinner is around 5 pm, the general assembly will be around 7.
The Stranger depends on your continuing support to provide articles like this one. In return, we pledge our ongoing commitment to truthful, progressive journalism and serving our community. So if you’re able, please consider a small recurring contribution. Thank you—you are appreciated!
CONTRIBUTE NOW