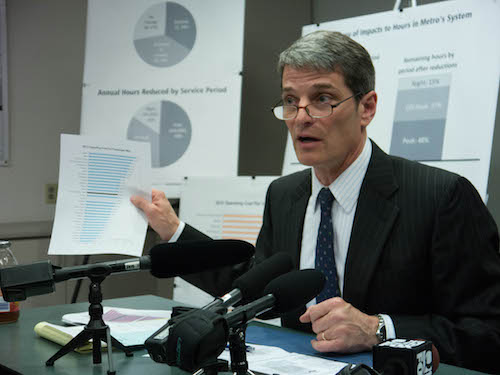 Watching King County Metro General Manager Kevin Desmond at his press conference today was flat-out depressing. He outlined huge service cuts that are coming because of tax-wary voters and state legislators who are happy to watch King County suffer. He spent most of his time rebutting specious claims about Metro's "bloated" budget (surrounded by nearly a dozen blown-up charts and graphs to back him up). And, he called a proposal to stave off cuts to Seattle's bus service by raising property taxes a "possible solution," but pointedly refused to endorse it or admit that it represents an important stopgap measure for the city to retain the bus service it voted overwhelmingly for.

What one wanted was for Desmond to deliver an outraged tirade directed at state lawmakers, in particular the Republican-controlled Senate, on behalf of people whose ability to move about Seattle is about to be fucked with.

Desmond didn't offer that. Instead, he stuck to legitimate but technocratic complaints. For example: Metro, until 2000, received a third of its funding from the MVET tax, while the sales tax which only partially replaced it is too "volatile" a funding source. But, when asked if he had a message for state legislators who created this problem, he said: "I would not deign to have a message for the state."

Metro is now sending its proposal to the King County Council to delete 72 routes and reduce in span or frequency an additional 84 routes—a 16% overall cut in service. You can see if your route is affected here. The cuts, assuming they're approved by the council, will start to kick in in September and be phased in over the following twelve months. The 55,000 Metro riders who are signed up for alerts will learn of cuts to their routes via text or e-mail, and notifications will be posted on buses.

"We know these service reductions are going to be difficult and painful," Desmond said. "However, the election is over, and we have to live within our means."

As for the media: "I'm dismayed when information and facts are characterized in certain ways," he said, "without full context." He didn't call out the Seattle Times editorial board by name, but he went out of his way to address misleading numbers it continues peddle.

Metro's operating costs are $136 per hour—"that was once again in the media today, in an editorial," Desmond said. The Times editorial board claimed the number was "among the highest in the nation" and called it "the biggest reason to vote no" on Proposition 1. But Desmond pointed to a chart showing that Metro is eighth in the nation on that score, compared to the top 30 bus agencies by ridership in the United States. And, none of the other transit agencies operate an asset like the downtown tunnel, without which the figure would come down significantly, he pointed out, calling it an "apples-to-oranges" comparison.

"We've been tightening our belt for the past five years," Desmond said, describing how Metro saved $800 million since the recession began by pushing the Amalgated Transit Union to accept concessions, raising fares, and eliminating 100 administrative positions. He suggested that new cuts would mean "hundreds" of drivers will be laid off. "I want to reiterate, we're not going to stop trying to find savings," he said, even as he emphasized that Metro ridership is at near-record highs.

As for how Metro is deciding where and how to cut, he said, "you go from the bottom in terms of the productivity list in the system, and you work your way up." But some routes, even though they may be less used, won't be cut because they're important to low-income segments of the population, Metro spokesman Jeff Switzer told me.

"I will pledge to the public and the taxpayers of King County, we will not rest," Desmond said, finally sounding purposeful and forward-thinking. But even that remark was quickly deflated: "If we can save a little bit more service down the road, we will."

The King County Council is planning to hold three public hearings between now and September about the proposed cuts. Ready your pitchforks, people.